Before rehearsals for Amir Nizar Zuabi’s “Grey Rock” could begin, refugee camps had to be visited, apartments had to be rented, checkpoints had to be passed and an uncertain, monthslong visa process had to be completed.

“Grey Rock,” which starts performances on Thursday at La MaMa in Manhattan, is about a Palestinian man who decides to build, in a shed, a rocket to the moon. A play performed by Palestinian actors — they all identify as Palestinian, though some passports say Israel and one says Jordan — and co-produced by the Remote Theater Project, its journey to New York was not exactly nonstop.

“Almost as nerve-racking as the M.T.A. system,” Mr. Zuabi said with a deadpan on a recent afternoon. “Almost.”

While Israeli companies and plays are a common presence in New York, plays by Palestinian companies or on Palestinian themes are rarer and often a source of controversy. In 1989, the Public Theater canceled a Palestinian play, with then-artistic director Joe Papp claiming, “I didn’t want to make a statement at this particular moment by presenting a play dealing with the Arab-Israeli world from a Palestinian point of view.”

In 2006, New York Theater Workshop effectively canceled a production of “My Name Is Rachel Corrie,” a play about an American activist killed in the Gaza Strip. In 2017, when New York University staged “The Siege,” reportedly destined for the Public Theater at one point, the Anti-Defamation League and the World Jewish Congress protested.

“Grey Rock,” a simple and somewhat allegorical story, is less overtly political than any of these pieces. “It’s an invitation to peek into who we really are,” Mr. Zuabi said.

Having spent the late fall rehearsing in Ramallah, a Palestinian city in the West Bank region, Mr. Zuabi and his cast were now stumbling through the play on the fifth floor of a building on Great Jones Street: creaking floors, tin ceilings, windows streaming smudged winter sunlight. Mr. Zuabi’s last play, “Oh My Sweet Land,” centered on the making of savory kibbe, but here the snack table held mostly sweets, including two Bundt cakes to celebrate two different birthdays. A filter dripped coffee into a thermos. The cast complained it wasn’t strong enough. 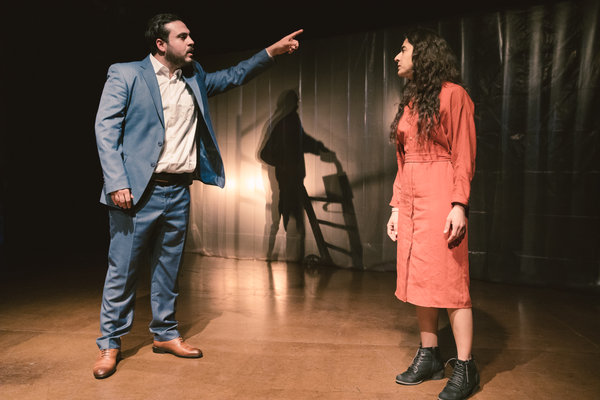 The actors spoke the lines in English, and Mr. Zuabi gave direction in Arabic. “There’s something about the intimacy and the preciseness that I can achieve in Arabic,” he said. The actress Fidaa Zaidan had a hushed word with Alexandra Aron, the play’s American producer. She wanted to know if she ought to say “chicken roast” or “roast chicken.”

After working several scenes and breaking for hand-rolled cigarettes — “Take 10 minutes. American minutes, not Palestinian minutes,” Mr. Zuabi called after his departing actors — they sat in a rough circle with Ms. Aron and discussed the particular challenges the play presented.

Two years ago, Ms. Aron, a producer and director who first learned of the Palestinian theater scene while directing in Israel in the mid-’90s, and Mr. Zuabi began to talk about a commissioned piece. It would explore, Ms. Aron said, “this question of what influence the U.S. has had on Palestine, on thinking and consciousness and not in just a political way.”

“Don’t get arrogant,” Mr. Zuabi chided. “It’s not a one-way relationship.” (As he later explained in an email: “Our land has produced the foundation blocks of Western civilization. The idea of one god was hatched in our neck of the woods.”)

There were straightforward ways to approach this relationship. “You’re aiding our occupiers with lots of money and weapons,” Mr. Zuabi said. But while he isn’t shy about articulating his politics — “I’m very anti-Israel, I’m occupied and I don’t like it” — polemics don’t interest him artistically.

He began to think instead about the 1969 moon landing. “It’s a moment that encapsulates all of the American values,” he said, adding, “the bravura, the nothing-is-impossible attitude, the technological superiority.”

“It’s almost a reversal of who we are,” he said. So what would it mean for a Palestinian man to attempt it?

Beginning in December 2016, Mr. Zuabi began workshops and structured improvisations in Haifa, Bethlehem, Jenin and Ramallah with the explicit goal of finding a diverse group of Palestinian actors. Once a shortlist of actors had been assembled, the visa process to come to the United States began.

In November, the company of five actors, with U.S. visas secured, moved to Ramallah, rooming together to avoid traveling back and forth through Israeli checkpoints, and began to rehearse.

Mr. Zuabi had written the play in English to make the story and its characters more accessible to a New York audience. Though the actors are all fluent in English, asking them to perform it was like asking them to swim with hands tied behind their backs and legs weighted, Mr. Zuabi said. “But somehow they’re still floating,” he said.

Ms. Zaidan said that she had to learn her speeches in Arabic first, mingling her emotions and mental imagery with the words. Only then could she act them in English.

“It was really weird for us,” the actor Alaa Shehada said as his castmates laughed. “In Arabic we emphasize everything! In English, no.”

But even in English, the actors were eager to work on a play that showed Palestinian characters living in relative peace. “As a Palestinian, you are always afraid of being identified as a fighter or a terrorist,” Mr. Shehada said.

“Here, there is no bombing, there is no shooting,” the actor Motaz Malhees said. “This time there is something genius.”

The play doesn’t ignore the realities of occupation. Checkpoints are mentioned, and so are visas. There’s the possibility of a military incursion by Israel. But these are ancillary concerns. “They’re present in the play like they’re present in our lives,” Mr. Zuabi said. “We don’t live these political headlines. We have boring, normal lives.”

“This is a show about people,” he insisted. It’s about the relationship between a father and a daughter, a mentor and an apprentice, a woman and her suitors, he said. “The truth is we represent nothing,” he said.

But building a rocket is also a clear allegory for making art, for creating something so extraordinary that the whole world must notice. “If someone can get a rocket to the moon from Palestine, it’s a celebration of our creativity, of our ingenuity,” the rocket builder Yusuf says in the play. “It proves that we can be something.”

Mr. Zuabi allowed the metaphor. “Making theater shows in Palestine” — with a limited infrastructure and lack of state funding — “sometimes feels like building rockets,” he said. “But when they take off, it’s glorious.”

Runs at La MaMa from Thursday through Monday.