PARIS — For Western theatergoers, critics included, watching Japanese stage productions can be a humbling experience. Too few make it abroad to allow a complete view of Japan’s distinguished theater tradition: With context missing and a limited frame of reference, the plays can seem mysterious. A useful rule of thumb is to admit ignorance — and embrace the unknown.

Parisians have had the chance to learn more than others this year. “Japonismes 2018,” an eight-month season of Japanese art, has brought more than 30 theater, dance and musical productions to Paris, as well as exhibitions and films. The festival marks both the 150th anniversary of the Meiji Restoration — when Japan did away with the military rule of the shoguns and consolidated power under an emperor — and 160 years since France and Japan established diplomatic relations.

The festival’s stage offerings have run the gamut from classical kabuki, a form born in the 17th century, to contemporary creations. While a few productions fostered dialogue between Japanese and French artists, most were an intriguing, if occasionally puzzling, window onto Japan’s rich theater scene.

A carefully considered kabuki double bill set the stage in September. With its complex historical conventions, kabuki — a genre combining a dramatic plot, singing and dancing — is far from easy to decipher. At the Théâtre de Chaillot, for “Narukami,” created in 1684, and “Iromoyo Chotto Karimame Kasane,” from 1823, each audience member was given an audio guide, much like in a gallery.

In addition to the French translation of the text, the commentary explained details that would otherwise have gone unnoticed, such as the sudden appearance of a new drawing above an altar in “Narukami,” or the symbolism behind some of the lush, heavy costumes.

The cast for both tales of love and betrayal was led by two Japanese kabuki stars, Nakamura Shido II and Nakamura Shichinosuke II (who specializes in female roles, all still performed by men in drag). Their highly stylized acting was a marvel of physical precision, complemented by elaborate makeup.

Still, expressions of emotion are deeply cultural, and relating to kabuki’s somewhat rigid (to Western eyes) character interactions can take some work. It’s easier to marvel at their foreignness and exotic appeal, but that is limiting: Delving into the genre’s principles and quirks is worth the effort, to understand its inner logic, too. 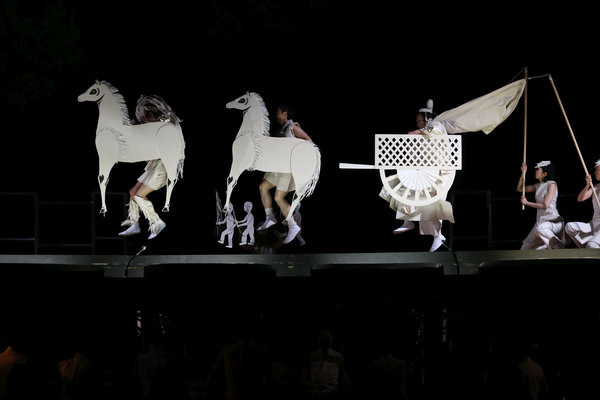 Satoshi Miyagi is adept at building bridges between theater traditions. The 59-year-old director has tackled the Greek myths of Elektra, Medea and Antigone in productions, and his version of the French author Léonora Miano’s “Révélation Red in Blue Trilogie” was performed in Paris in October. In 2006, he also adapted part of the Indian epic “Mahabharata,” made famous on the European stage by Peter Brook’s sprawling 1985 version.

His “Mahabharata — Nalacharitam,” focused on the story of the princess Damayanti and King Nala and here revived at the Grande Halle de La Villette, skillfully incorporates a range of influences. Mr. Miyagi returns to a division that is common in noh theater and in part of the kabuki repertoire: In his work, each character is typically split between one actor who speaks and one who is silent, but moves and acts. In “Mahabharata — Nalacharitam,” the setup is even more complex. A single kneeling performer speaks for the performers who act out the leading male and female roles, but they occasionally interject, too.

The result made the legendary Indian characters look like long-forgotten cousins of kabuki’s heroes. Almost uniformly dressed in white, the cast also employed stylized postures to convey the story; as Damayanti, Micari was especially compelling, wide-eyed and smoothly elegant. At La Villette, a former slaughterhouse in the center of Paris, a narrow stage encircled the auditorium, putting the audience in the middle of the action. Mr. Miyagi made the most of it, staging entrances from behind the audience and arranging the actors and musicians in wraparound tableaux like frescoes.

The director also brought an offbeat sense of humor to some scenes, providing occasional relief from the solemnity of the proceedings. A spoof of Japanese TV commercials had the audience laughing heartily. Some characters were given quirky mannerisms, including Princess Damayanti’s young cousin, who waves like an overenthusiastic royal. Once Parisians were in on the jokes, the atmosphere at La Villette warmed.

Other “Japonismes 2018” productions had a harder time bridging the cultural gap. The director Takahiro Fujita made his Paris debut at the festival with “Jetons les livres, sortons dans la rue” (“Throw Away Your Books, Rally in the Streets”) at the Maison de la Culture du Japon. The production was freely inspired by an 1971 film of the same name, directed by the avant-garde artist Shuji Terayama, who died in 1983.

Mr. Fujita adopted his predecessor’s nonlinear, experimental approach to narration, but this made for a frustrating experience when viewed with subtitles. The story is loosely structured around a young man, Himi, and his dysfunctional family. His sister Setsu is obsessed with her pet rabbit, and their grandmother asks a neighbor to kill it. In the film, Setsu is subjected to a gang rape, but onstage, this is only hinted at, and red herrings keep distracting the audience from this subplot and others.

It was presumably the goal, but the point felt lost in translation. In visual terms, however, Mr. Fujita is an inventive director. For “Jetons les livres, sortons dans la rue,” he used scaffolding to create a flexible set, erected, disassembled and endlessly rebuilt by performers. He’s only 33: We might yet see much more from him.

Hideto Iwai was the only Japanese director in the “Japonismes 2018” lineup to work with French performers. He was commissioned by T2G – Théâtre de Gennevilliers, a small theater in a working-class suburb that often punches above its weight artistically, to produce a creation with local inhabitants.

Mr. Iwai was a “hikikomori” — the term for reclusive individuals who refuse to leave their home or bedroom — from age 16 to 20, and as he tells it in the playbill, he initially hoped to encounter a French equivalent to this Japanese phenomenon. He was disappointed, and attempts to work with refugees or local Romany travelers also proved unsuccessful.

Instead, for “Wareware no moromoro (nos histoires…)” (“Our Stories”), he assembled a varied group of Gennevilliers residents, some of them with stage experience. Gently, he allows them to tell fragments of their personal stories. There is Marion Barché, a bright, animated performer who recalls how her parents stifled her sexual expression; a couple married for half a century, Lucienne and Michel Larue; Moroccan-born Abdallah Moubine, who describes with indefatigable energy his years as a union representative at the carmaker Citroën.

It is, in a way, an oral history of different generations in Gennevilliers, and Mr. Iwai directs it with a light touch. Mismatched chairs and tables serve to recreate the play’s scenes, and the performers use pillows and bedsheets to suggest the homes they grew up in or made for themselves. They listen intently to the others’ memories throughout, and when they interact, one senses the affection they have developed for one another.

Yet “Wareware no moromoro (nos histoires…)” also feels at times anecdotal and unedited. One senses Mr. Iwai’s sociological fascination with his real-life characters, rooted as they are in another culture, but it comes at the expense of dramatic tension. We are always someone’s alluring stranger: The question is how to understand that otherness in artistic terms without fetishizing it.