WALLOWA COUNTY, Ore. — When you’re lying face down for 20 minutes in a steaming pile of elk droppings, having to remain breathlessly still because the herd may have just spotted your hunting party, you find odd ways to distract yourself. I pondered a simple but vexing question: How can hunters claim to care deeply about the animals they kill?

At that point in our weeklong trek in eastern Oregon across the 33,000-acre Zumwalt Prairie Preserve, the six of us in the group had been belly-crawling, tightly single file, for a quarter-mile. Wearing heavy backpacks, we looked like overgrown turtles as we awkwardly tried to sneak up on our prey. But elk spook easily and for two long days they evaded us, always managing to see, smell or hear us from what seemed to be impossible distances, well before Chelsea Cassens, our group’s permitted hunter, could get within the 200 yards she needed to make an “ethical” kill shot.

The purpose of my trip was to report on growing environmental opposition to lead ammunition. Scavenger animals — including eagles, foxes and bears — often feed on the viscera that remain after hunters kill their prey, and the lead from standard bullets poses serious contamination risks. Lead poisoning is the leading cause of mortality among California condors, for example.

The Nature Conservancy, an environmental group that owns the Zumwalt Preserve, had granted Ms. Cassens, 33, permission to shoot one adult female elk. Using copper bullets for the first time, Ms. Cassens was kind enough to invite me along. The conservancy hosts roughly 250 hunters annually who harvest about 130 elk a year as part of an effort to control its population.

I’ve been a vegetarian since college in what started as an experiment in healthier eating and morphed into concerns about the environmental impacts of a non-plant-based diet and a vague discomfort with killing animals. Mostly, this dietary habit stuck though I never lost my taste for meat; I succumb to the occasional pork chop and sometimes steal nibbles from my son’s morning bacon. 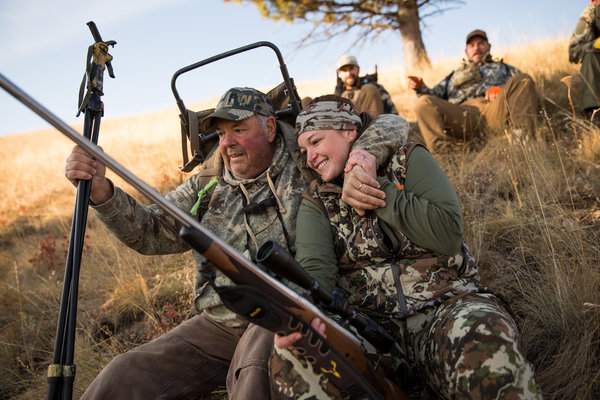 Still, I try to avoid letting my personal dietary restrictions impinge on my job. On the road, it’s usually easy enough to find a salad or pasta, and peanut butter often comes in handy. But if it looks as if my food preferences might become a distraction to my reporting, as it did on this trip, I keep my vegetarianism quiet and eat whatever is put in front of me.

During my week with Ms. Cassens, who was a supremely gracious host, I ate more meat than I have in the past decade — a costly gastrointestinal move to be sure, but worth it to feel as if I was a part of the group and to better understand their perspective.

Admittedly, it is difficult for non-hunters like me to understand how people who make a hobby of killing animals also say they want to protect them. On the other hand, eating packaged store-bought meat (or feeding it to your child, as I do) raises its own ethical questions. While the bloodless, neatly wrapped meat I buy at the supermarket is divorced from the actual killing process, the lives and slaughter of animals raised for this market are often more brutal and certainly more environmentally destructive than the lives and slaughter of those living in the wild.

I did not press Ms. Cassens, who has hunted since she was 10, about her rationale for this pastime because my reporting focus, not to mention the reason I’d been invited on the trip, was to learn about her choices in ammunition. But watching how she stalked her prey — routinely giving up shots, for instance, that risked injuring or hitting a non-target animal — and how she understood and sought to safeguard this habitat, I got a glimpse of what it means to be a conservationist hunter. Ms. Cassens emphasized the difference between intentional, humane and sustainable killing, like that involved in licensed hunting, and the unmanaged killing that happens in poaching or the unintended, cruel and reckless sort of harm that comes from poisoning non-target species and polluting their habitats by using lead bullets.

Since humans have eradicated many animal predators, hunting is often cited as a wildlife management tool, essential for culling species that now reproduce beyond their habitat’s carrying capacity.

Hunters also play a role in conservationism, as they tend to be the people who spot and report poachers to the wildlife authorities. State wildlife agencies rely heavily on money generated from hunting license fees and excise taxes on guns, ammunition and angling equipment.

Surely the most controversial version of this sport is trophy hunting, which usually entails the killing of big game for a set of horns or tusks, a skin or a taxidermied body.

Like many hunters, Ms. Cassens distanced herself from those who kill strictly for the trophy. “Our meat is dinner six nights a week,” she said. Nonetheless, many critics see hunting in any form as barbaric, even when it’s for sustenance or ecological reasons. The vast majority of hunted species — such as waterfowl, upland birds, mourning doves, squirrels and raccoons — provide minimal sustenance and do not require population control, according to the Humane Society of the United States.

Up at 4:30 a.m. each day, we criss-crossed nearly 10 miles before returning after dark to base camp. The elk were especially vocal because it was rutting season, which is when the males noisily rub their antlers on trees, fiercely guard their herd of estrus females and fight other males who get too close or try to mate. As we hiked, Ms. Cassens’s husband, Tanner, 36, explained which sounds indicated that elk were dueling, mating or courting. Ms. Cassens’s father, Ed Hughes, 63, named every bird that fluttered overhead and distinguished for us the native from the invasive grasses underfoot.

At one point, I mentioned that I wished I had brought my drone to capture a bird’s-eye view of the picturesque landscape. I immediately sensed a discomfort from the group about my comment. Justin Jones, also a longtime hunter and the Eastern Oregon stewardship manager for the Nature Conservancy, later explained to me what I had noticed.

He cited the principle of “fair chase,” which involves deliberately seeking to somewhat even the odds while casting the animals as worthy opponents in a game of life and death. According to this ethic, he said, hunters hike rather than use all-terrain vehicles; they use bows and arrows rather than high-powered rifles with telescopic sights; and by all means, they forego airplanes for the purpose of locating prey. A drone would have been fine for me to use, Mr. Jones said, but only if we ensured that it in no way helped their hunt.

Hunting is a time-consuming endeavor that involves large amounts of planning. Depending on the type of hunting, it entails long periods of sitting quietly in the elements. If done as a group, it is an experience imbued with camaraderie, one that forges lifelong friendships not to mention an appreciation for the outdoors.

Without cell reception, I had to slow down and unplug. The silence, the surroundings, the waiting felt psychologically cleansing.

This is partly why hunters view hunting not just as a hobby, but as a cultural value and a tradition they want to pass down to their children. A Fish and Wildlife survey from 2016 found that only about 5 percent of Americans 16 years old and older hunt, roughly half the percentage of those who hunted 50 years ago — a decline most researchers believe will accelerate.

On the third day of trying, Ms. Cassens succeeded in shooting and killing a 450-pound elk. For a half-hour, the group huddled near the fallen animal, vacillating between long somber silences and exuberant hugs. Next, the group spent an hour or so strenuously but carefully field dressing their kill, which means carving up the animal into pieces, leaving its entrails on site while packing the muscles and limbs into their packs for the hike out.

Mr. Jones busily climbed a nearby tree to secure one of three hidden outdoor cameras over the remains of the elk carcass that the hunters planned to leave behind. As part of his effort to raise awareness of lead ammunition concerns, he wanted to capture footage of the grizzlies, raptors and foxes that would soon feed on the carcass. “Come and get it,” Ms. Cassens said. “Lead-free meal, right here!”