LONDON — “I have power and you have none.”

So says Man to Woman in the opening lines of “When We Have Sufficiently Tortured Each Other,” Martin Crimp’s sold-out, much maligned play at the National Theater here. But does this deluded guy know who he’s talking to?

Woman (and, yes, that is her character’s name) is portrayed by Cate Blanchett in this laboriously wordy production, which has theatergoers both queuing up for returned tickets and walking out mid-play. And woe unto any Man, even one with a capital M, who thinks he can outpower Ms. Blanchett.

Pinned and spread-eagled in a wedding dress against an Audi’s shiny black hood by Stephen Dillane as Man, it’s clear that Ms. Blanchett’s Woman still has the upper hand or even, as things turn out, the upper phallus. For one thing, she’s Cate Blanchett, the two-time-Oscar winner and fearless stage star on whom I’d put my money in any Olympics of acting.

But her character’s ascendancy here is also a matter of her simply being Woman. That means she’s capable of out-imagining, out-empathizing and ultimately outwitting anyone with a Y chromosome. Having been subjected to years of assumptions about her gender’s weakness and subservience, she’s acquired a mental and emotional agility that no patriarch could possibly rival.

I caught Ms. Blanchett at the National on Friday, and her performance turned out to be the perfect curtain raiser for a weekend of watching gifted actresses in plays that probed the feminine capacity for survival. On Saturday afternoon, there was Laura Wade’s “Home, I’m Darling,” at the Duke of York’s Theater, in which Katherine Parkinson plays a 21st-century woman who has elected to live like a doting, house-proud housewife of the 1950s.

And that night, across the Thames at the Bridge Theater, I found Laura Linney radiating shadow-streaked sunlight as the title character and sole performer in “My Name Is Lucy Barton.” That’s Rona Munro’s crystalline adaptation of Elizabeth Strout’s best-selling novel about a writer’s escape from a grim middle-American childhood.

Of the three, “Lucy Barton” is the least overtly political and, on its own terms, the most artistically satisfying. But seeing these productions back-to-back had me thinking about acting not only as a delicate and commanding art but also as an existential condition, in which gender is always partly a matter of performance. 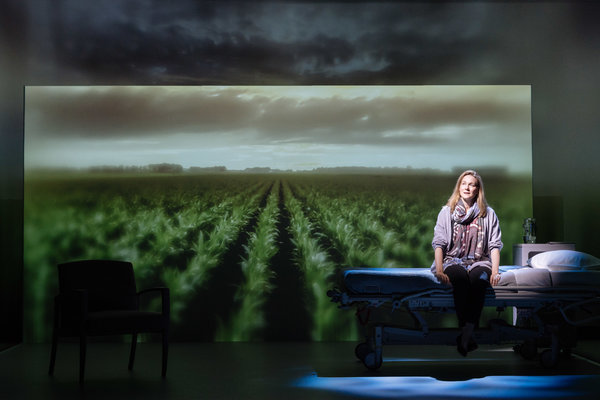 That’s most obviously and immediately true for Man and Woman in (to use its full title) “When We Have Sufficiently Tortured Each Other: 12 Variations on Samuel Richardson’s ‘Pamela,’” which has been staged as a meticulously ordered mess by the formidable Katie Mitchell. It takes its cues from — and then riffs like mad on — “Pamela; or, Virtue Rewarded,” published in 1740 and sometimes described, debatably, as the first English novel.

In it, the title character, a comely 15-year-old serving girl, is pursued by her rich roué of a master, who lays siege to her maidenhood. Mr. Crimp transposes the novel’s archetypes of unworldly, vulnerable woman and controlling, predatory man into a shifting, contemporary, aged-up key.

[What’s new onstage and off: Sign up for our Theater Update newsletter.]

Be warned: If you like to do full homework before seeing a play, you should look into not only Richardson’s novel but such theorists of sexuality as Freud and Foucault and the latter-day feminist philosophers Amia Srinivasan, Ellen Willis and Jacqueline Rose. They’re all quoted in the program.

If you choose to read none of the above, you will not be entirely lost watching “Tortured.” You may, however, be bored, despite the simulated sex and violence that abound on stage. These acts occur in what appears to be a suburban garage (Vicki Mortimer is the set designer), wherein Man and Woman woo, imprison and abuse each other, while taking turns being on top, literally and otherwise.

Their assorted poses are matched and mismatched by dialogue that encompasses what feels like far more than a dozen variations on archetypal gender-baiting and -switching. Mr. Dillane, an excellent actor who won a Tony for the 2000 Broadway revival of “The Real Thing,” is the less mutable of the two and by the end seems understandably depleted.

But what a piece of work is Ms. Blanchett. Her Woman — and her Man, too — are evoked via a head-spinning range of vocal ranges and personae, picked up and discarded as effortlessly as if they were Kleenexes. She’s so convincing in each fleeting identity that you do indeed start to realize how much of what has traditionally been regarded as manly or womanly is, well, just acting. (Blanchett fans might recall her working in a simliar vein as Bob Dylan in Todd Haynes’s “I’m Not There.”)

Judy, the heroine of the ingeniously titled “Home, I’m Darling,” would no doubt be appalled by such shenanigans. Though this former business executive turned industrious housewife (Ms. Parkinson, looking like a cross between Lucille Ball and Maya Rudolph) is a resident of 21st century Britain, she and her husband, Johnny (Richard Harrington), pretend they’re living in the supposedly brighter and simpler world of the 1950s.

Anna Fleischle’s set and costumes are a retro-stylist’s delight. And much of the fun of the show, snappily directed by Tamara Harvey, comes from seeing how Judy and Johnny are liberated and, ultimately, imprisoned by these period accouterments.

Ms. Wade, best known for the boy’s club-eviscerating play “Posh,” knows her craft. She turns her “Home” inside out with a plot borrowed from Ibsen’s “A Doll’s House,” refracted through the gaze of a woman who actually wants to be a doll. This reworked story is ultimately stretched too thin to sustain much tension.

But Ms. Parkinson (of AMC’s “Humans” and a fabulous Masha in the Royal Court “Seagull” in 2007) inflects Judy’s willful domestic blissfulness with a subconscious note of squeaky dissonance. The way Judy walks (and dances and cleans house) with heavy tread in high heels is one of the best arguments ever made for the absurdity of such footwear.

“Lucy Barton,” a 100-minute monologue directed with penetrating calm by Richard Eyre, is about a different kind of search for selfhood. Lucy, a fiction writer, remembers being bed-bound in a hospital in New York City, where she is visited by her mother, whom she hadn’t seen in many years. (Tellingly, her husband, with whom she has two young daughters, is afraid of hospitals, and is seldom there.) The encounter inspires recollections of a dirt-poor, love-starved childhood in rural Illinois, where Lucy experienced abuse that almost resists description.

One of the most unaffected and transparent of contemporary actresses, Ms. Linney is the perfect conduit for Ms. Strout’s lucid, direct prose. As she assumes both parts in Lucy’s dialogue with her austere, judgmental mother, you may at first feel like you’re eavesdropping on a rather mundane conversation.

But an ever-deepening complexity emerges from such seeming simplicity. This is writing — and acting — that grows in power without your being aware of it, and the tears it elicits feel both surprising and natural.

More than any of the struggling, often confused women I encountered during these three productions, Lucy becomes aware of who and what she is. Such knowledge hasn’t been acquired easily, and it comes at the price of great loneliness. But when Ms. Linney finally speaks the words of the title, just before the play ends, it is a triumph of self-assertion — gentle but glorious, and unconditionally earned.

When We Have Sufficiently Tortured Each Other
Dorfman Theater, London; nationaltheatre.org.uk.