Viewers who are missing their summer Love Island fix have been sampling the Australian version – which is one of a string of reality TV imports and repeats peppering the UK’s TV schedules.

The regular Love Island was cancelled because of coronavirus, so the 2018 Aussie series is now on ITV2 instead.

And with filming on most reality shows now on hold in the UK, ITV has also started showing the US edition of The Masked Singer, while the BBC has bought the rights to Drag Race Canada. 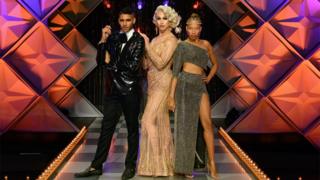 E4, which is currently repeating classic episodes of the British Big Brother, will also show Married At First Sight Australia.

As far as talent shows are concerned, lockdown left Britain’s Got Talent and The Voice UK viewers hanging mid-series, while the BBC’s big spring singing contest starring Little Mix was pushed back.

Producers are now trying to figure out how to salvage the usual autumn and winter ratings winners like The Great British Bake Off, Strictly Come Dancing, The Apprentice and I’m A Celebrity… Get Me Out Of Here.

Not all new reality shows have been scuppered by the lockdown, however. Channel 4 has announced a new series and a celebrity version of The Circle, in which contestants are helpfully locked away and communicate via a social media platform.

Love Island Australia launched on Monday with almost 500,000 live viewers – 15% of the total who tuned in for the launch of last summer’s series.

Many were struck by the lack of diversity and levels of superficiality and bravado that put even the British version to shame, with quotes like: “It’s a deal-breaker if a guy doesn’t have a boat”; and “I’m so good looking, I’m so pretty”.

Do I think love island Australia is going to be good? No. Am I going to watch it every night for the next 6 weeks? Absolutely 🤷🏼‍♀️ #LoveIslandAUS

I’m just not invested? Probs cos it’s old and there wasn’t the usual promo and hype #LoveIsland #LoveIslandAUS

The series was on Australian TV two years ago, highlighting one drawback of airing existing series from other countries – spoilers.

That’s a particular danger with the second series of The Masked Singer US – a show that relies so much on mystery – which is on ITV on Saturday afternoons, eight months after it went out in the States.

But TV critic Emma Bullimore says importing shows is “a clever idea” in the circumstances.

“In terms of entertainment shows, this has obviously been a really difficult time, as it has across the board,” she tells BBC News.

“Of course we don’t live in an insular world any more and there are spoilers everywhere on the internet. But if you want to watch it and enjoy it, you can choose not to look it up.”

With Big Brother, whose Best Shows Ever are on E4, it’s more about indulging in nostalgia than trying not to remember who actually won.

“It was such a different piece of telly, and people have so much nostalgia and memories wrapped up in it,” Bullimore says.

“It was fascinating to watch the first one with that Nasty Nick moment – it’s so tame now compared to things that happen on reality shows, but it was so dramatic back then.”

Big Brother’s Beat Ever Episodes have made me realise that repeats aren’t really that bad, so long as it’s carefully curated stuff that we have not legit seen in ages.

It’s not just reality shows that have been dredging up old memories – the soaps have also turned to classic moments to make up for new episodes being scaled back.

EastEnders finally ran out of new episodes on Tuesday, when the programme ended with the words: “To be continued…”

Bullimore points out that TV executives are “not just rehashing things – there have been some really good, clever last-minute commissions”.

Shows from Grayson Perry’s Art Club to Jamie Oliver’s Keep Cooking & Carry On and Peter Crouch’s Save Our Summer have been hastily put together, with varying degrees of success.

So what will become of the major entertainment shows that are due on air in the coming months?

ITV said Britain’s Got Talent and The Voice will pick up where they left off “later this year”. But those live shows are unlikely to have a studio audience.

I’m A Celebrity is expected to go ahead in November as usual, but it’s not yet clear where and how.

Bake Off normally reaches screens in late August, but filming has been delayed and a Channel 4 spokeswoman said it would start “as soon as it is safe to do so”.

Meanwhile, the BBC has “committed” to the return of Strictly this year, with the professional dancers set to start rehearsing remotely at the end of July.

Strictly and Bake Off are both shows where some or all of the cast and crew may be required to isolate together in order to protect them from the virus.

The Apprentice normally starts in October, but filming on that was delayed too, and Lord Sugar said in April that it could return in the spring, or be postponed for a whole year.

Another series that’s usually a fixture at the end of the year is The X Factor. But bosses accidentally pre-empted the lockdown restrictions, with Simon Cowell reportedly having decided in early February to “rest” it for a year.

If the pandemic continues, viewers can rest easy that there’s lots of TV out there to fill the schedules.

Love Island alone is shown in Romania, Poland, Belgium, Sweden – and 10 other countries.