No matter how much free time you have this weekend, we have TV recommendations for you. Come back every Friday for new suggestions on what to watch.

This Weekend I Have … a Half-Hour, and I Like Action

Sunday’s episode of “Barry” is an outlier and potentially divisive — but I love it. Barry (Bill Hader) has been sent to kill another unsuspecting dude, but Barry is off his game this season, and again things don’t go according to plan: Brutal, bone-breaking fight sequences ensue that tilt back and forth between heightened cartoonishness and grim human agony. It’s some of the best fight choreography I’ve ever seen on TV, not because it’s so sophisticated, per se, but because it’s so character driven.

“Barry” is a dark, dark show, but it’s never more curious about violence than it is curious about the consequences of violence. This episode has brutal moments and legitimate shocks, and much in the way the acting class is an externalization of Barry’s own social performance, these fights are a physicalization of Barry’s turmoil, his self-loathing, his ostensible desire to change and his deep fear that he can’t. 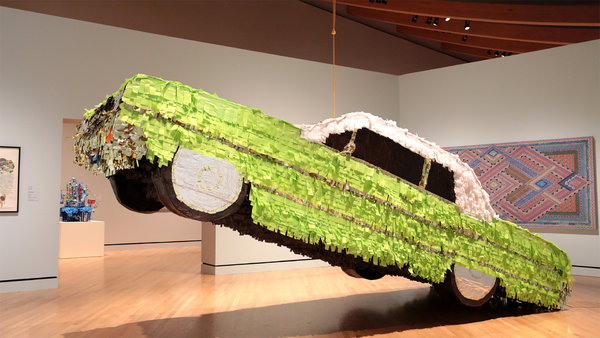 This one-off special examines the work of several different artists from around the country, and it’s an interesting and inspiring look at the often overlooked vastness of American expression: replicas of engines carved in stone, found-object sculptures that somehow capture the tumult within, piñatas that reinterpret Chicano identity. Sometimes art documentaries can feel a little stuffy, but this is intimate and joyous.

… Several Hours, and Feed Me, Seymour

‘Street Food’
When to watch: Now, on Netflix

What if “Chef’s Table” left the realm of the chichi and turned its attention elsewhere? That’s this new nine-part series, which takes that same obsessive chef worship and lusty cinematography and focuses it on street food. Each episode is set in a different city in Asia (for this season) and profiles a few fascinating chefs. The food all looks amazing, obviously, and “Street Food” emphasizes how autobiographical cooking is, how contextual. The episode about Yogyakarta, Indonesia, is especially good.