When the artist Luciano Garbati made his sculpture of Medusa holding Perseus’ severed head — an inversion of the centuries-old myth — feminism was not what he had in mind.

He wasn’t thinking of the #MeToo movement either: Mr. Garbati had created the work in 2008, nearly a decade before the movement went mainstream.

Mr. Garbati, an Argentine artist with Italian roots, was inspired by a 16th-century bronze: Benvenuto Cellini’s “Perseus With the Head of Medusa.” In that work, a nude Perseus holds up Medusa’s head by her snaky mane. Mr. Garbati conceived of a sculpture that could reverse that story, imagining it from Medusa’s perspective and revealing the woman behind the monster.

On Tuesday, Mr. Garbati’s sculpture — “Medusa With the Head of Perseus” — was reimagined as a symbol of triumph for victims of sexual assault, when it was unveiled in Lower Manhattan, just across the street from the criminal courthouse on Centre Street. 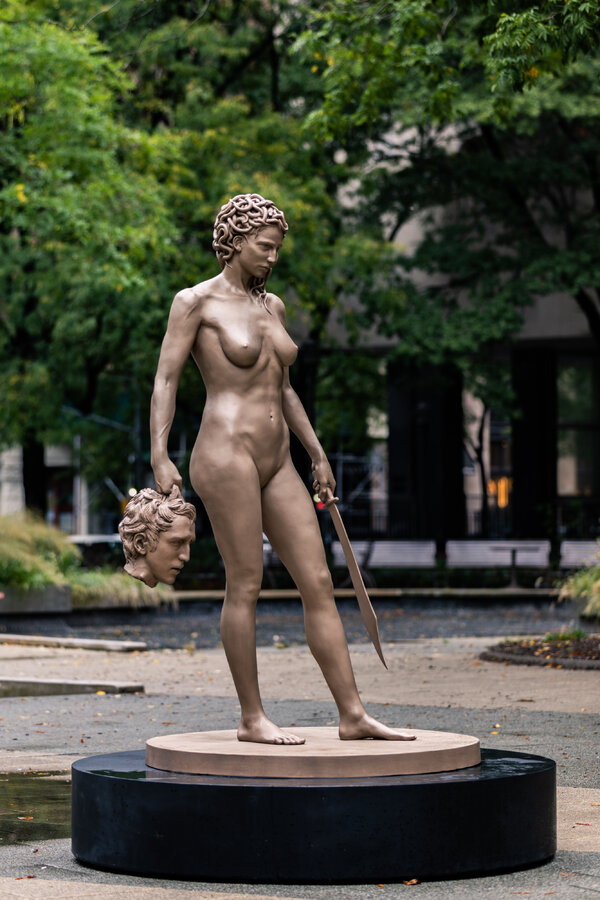 A news release advertised the statue as an “icon of justice,” noting that the towering, nearly 7-foot-tall Medusa stood across from the building where men accused of sexual assault during the #MeToo movement were prosecuted, including Harvey Weinstein, who had been convicted of two felony sex crimes there in February. (The idea for the site predated the trial, but the sentiment remained.)

Standing in the center of Collect Pond Park, Medusa — her gaze low and intense — holds a sword in her left hand and Perseus’ head in her right. The head was designed after the artist himself — a convenient model.

In his application to the city’s Art in the Parks program, which reviews proposals for public art installations like this one, Mr. Garbati noted that Medusa had been raped by Poseidon in the Temple of Athena, according to the myth. As punishment, Athena turned her wrath on Medusa, transforming her hair into snakes. The application stated that the story had “communicated to women for millennia that if they are raped, it is their fault.”

At Tuesday’s unveiling in the park, where the statue will stand until the end of April, Mr. Garbati talked about the thousands of women who had written to him about the sculpture. Many saw the image as cathartic, he said.

But for some online commentators, the sculpture did not quite meet the moment. As news about the sculpture’s planned installation spread, activists and observers on social media wondered why a piece of art meant to honor the #MeToo movement — which was animated, in large part, by an outpouring of personal stories from women — was created by a man.

Others wondered why, if the sculpture was intended to be about sexual violence, Medusa carried the head of Perseus and not Poseidon, her rapist. And some questioned the decision to depict Medusa as a lithe, classically beautiful nude figure when she was described as a monster.

Mr. Garbati said in an interview that, by now, his sculpture had a sort of independence from him, a life of its own created by outsiders’ observations and interpretations.

“I would say I am honored by the fact that the sculpture has been chosen as a symbol,” he said. He noted how the whole project had helped him realize that he was a “product of a patriarchal society” himself.

As for the question of mythological accuracy, Mr. Garbati said his work was a direct response to Cellini’s sculpture, which depicts the story of Perseus slaying Medusa and then using her severed head as a weapon, harnessing her power of turning people to stone with her stare.

Regarding Medusa’s model-esque figure, Mr. Garbati suggests that critics consider the literature from a recent exhibition at the Metropolitan Museum of Art that chronicles how artistic depictions of Medusa morphed from beastly to beautiful starting in the fifth century B.C.

Bek Andersen, a photographer who worked with Mr. Garbati to install the sculpture in Lower Manhattan, isn’t bothered by the gender of the artist.

“To me, it’s exciting that the artist is a man,” she said in an interview. “I think men feel left out of the Me-Too conversation, and I think they’re afraid of what it means for them.”

In 2018, a decade after the creation of the original resin sculpture, images of Mr. Garbati’s sculpture began to spread online. It gained meme status after he posted photos of the work on Facebook, and it was used as a symbol of female rage when the #MeToo movement dominated the news.

Ms. Andersen’s involvement began around that time. Scrolling through Instagram in bed, she saw a photo of the work, and was immediately taken with it, particularly because of her interest in mythological characters and the concept of “flipping the script.”

Mr. Garbati’s sculpture was exhibited in a storefront pop-up gallery on the Bowery in 2018. With the help of an anonymous donor, Ms. Andersen and Mr. Garbati founded the Medusa With the Head project and started to generate 12-inch replicas of the piece, which sell for $750 each. (Ten percent of the proceeds are donated to the National Women’s Law Center.)

Last weekend, even after criticism of the new sculpture bubbled up on Twitter, Ms. Andersen said, the miniature replicas sold out on the website.

“Destabilizing the narrative as told through a patriarchal lens is really where the power of the work lies,” Ms. Andersen said. “It causes a person to pause.”