“The Jungle,” a new British play about a French refugee camp, was an obvious candidate to transfer to New York: critically lauded, commercially successful, timely and talked about.

But it had one big problem: Three of the 17 people in the London cast were citizens of predominantly Muslim countries whose residents have been barred by President Trump from traveling to the United States. 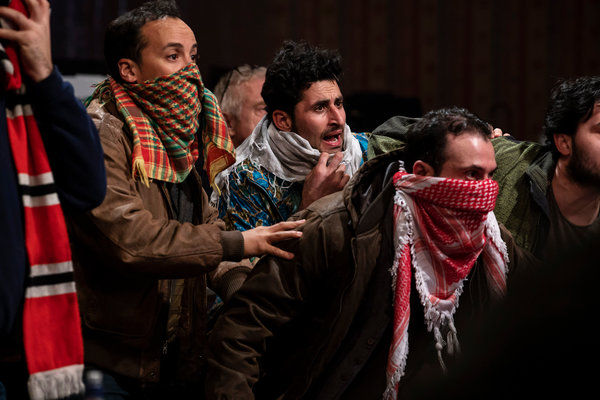 The show’s creative team and producers were reluctant to move the play without all the cast members, saying their life experiences — several had lived in the Calais refugee camp being depicted — gave the show its authenticity. But trying to get two Iranians and a Syrian into Trump-era America to perform a drama that is inherently sympathetic to refugees was, to put it mildly, daunting.

“The odds were against us,” said Stephen Daldry, who is directing the play alongside Justin Martin. “We knew it was going to be a challenge.”

Over several months, a coalition of celebrities (including Sting and Benedict Cumberbatch), religious leaders (the former archbishop of Canterbury) and politicians (the mayors of New York and London) joined forces in an effort to persuade the administration to grant the actors a waiver from the ban.

Of course, there was contingency planning: An Iranian-American actor, Arian Moayed, was quietly flown to London and intensively rehearsed for a key part (he even went on one night in the ensemble) so he could replace one of the refugees in New York if need be.

And then there was a zany-seeming gamble: After one of the Iranians was initially rejected by the State Department, the producers decided that, rather than try to persuade the United States to admit the Syrian actor, they would endeavor to win him British citizenship, thinking that would be an easier path to New York.

It worked. All three performers — Ammar Haj Ahmad, the Syrian refugee who successfully became a British citizen, and two Iranian refugees, Moein Ghobsheh and Yasin Moradi — were ultimately granted employment visas by the State Department, made it through airport security (Mr. Moradi was held for hours of questioning because he had once been fingerprinted while fleeing across Serbia) and are now happily rehearsing in Dumbo, Brooklyn.

“I still can’t believe I’m in America,” said Mr. Ahmad, 36, who was trained as an actor in Syria before seeking asylum in Britain, where all three men live now. “It’s bizarre that we live at a time when you need all this work to get one person to another country, and amazing that it happened. But I also feel very privileged, because every day I’m here, I think about the millions of people who can’t go from one place to another.”

“The Jungle,” cast intact, will start performances Tuesday in anticipation of a Dec. 9 opening at St. Ann’s Warehouse, a prestigious and globally minded nonprofit theater on the Brooklyn waterfront. The show has an immersive set — audience members sit in a replica of an Afghan cafe at the camp, and post-show performances and talks will be held in the same geodesic dome that was used by the show’s writers, Joe Murphy and Joe Robertson, when they established the Good Chance Theater at the camp in 2015. The play is scheduled to run for eight weeks, which will make it the longest-running show in the theater’s history.

Mr. Ghobsheh, a 23-year-old songwriter and musician who is now using the first name Milan, and Mr. Moradi, a 26-year-old kung fu practitioner who competed on the Iranian national team, were both discovered by the theater in the Calais camp, known as the Jungle. Mr. Ghobsheh, who is Kurdish and said he fled Iran because it had become increasingly difficult for his people, started teaching kung fu to other refugees in the Jungle, and then began performing as an actor. He said he believes in the power of the play. “I think it is going to be helpful to show our story,” he said.

Matthew Covey, a Brooklyn lawyer whose firm specializes in helping international artists overcome visa problems, assembled a 160-page package of legal arguments and letters of support for St. Ann’s and the refugees. Mr. Covey said performing artists have faced challenges getting visas to enter this country for years, but that the travel ban is a new, and largely untested, hurdle. In addition to Syria and Iran, it restricts travel from Libya, Yemen, Somalia, Venezuela and North Korea, and was just upheld by the Supreme Court in June, after two previous versions were overturned.

“The issue of refugees is on everyone’s mind right now,” Mr. Covey said, “so a powerful artistic piece coming out of that context is very compelling, and when this first came in, we said, ‘We have to do this, and we have to make it work.’”

The case was given a push by Senator Kirsten Gillibrand, a New York Democrat whose office urged the State Department and the American Embassy in London to take a look. “Welcoming refugees is what the Statue of Liberty stands for and what our nation stands for, and this play is so important because it gives refugees a chance to bring their powerful experiences to the United States,” she said in a statement.

A State Department official, who declined to be quoted by name, said he could not discuss the specifics of the “Jungle” cases, citing “visa confidentiality.” He added, though, that the government is granting waivers for people whose entry “would be in the national interest” and “would not pose a threat to national security or public safety” and whose prohibited entry “would cause undue hardship.”

Those are the arguments the show’s promoters sought to make — saying support from the government (St. Ann’s gets money from the New York State Council on the Arts) and testimonials from important cultural figures showed that the project was in the national interest. “We said, ‘We have a story that we think people should hear, and only these people can tell it,’” said David Lan, the former artistic director of London’s Young Vic Theater, where “The Jungle” was presented before moving to the West End.

Sting and his wife, Trudie Styler, sent a letter to the American Embassy in London, arguing that “the play discusses and confronts issues and stories that are largely unreachable outside the world of art,” while the former archbishop of Canterbury, Rowan Williams, called the British production “a genuine national event” and said, “I believe that the planned production in New York will likewise be a profoundly significant event for the U.S. cultural world.”

“The Jungle” is not the first production to win waivers from the travel ban, but they are rare. Rami Farah, a Syrian dancer, was issued one to perform at Cincinnati’s Contemporary Arts Center. The West-Eastern Divan Orchestra said it had received waivers for musicians from Syria and Iran to join a five-city American tour. And Nassim Soleimanpour, an Iranian playwright, just got one that should allow him to come to the United States to appear in his play, “Nassim,” which is scheduled to begin performances at New York City Center on Thursday.

The challenges are common enough that Mr. Moayed, a founder of the New York theater company Waterwell, said he has been called upon before to fill in for actors who might be prevented from entering the country; he also faced an issue last year when an Iranian actor was barred from traveling to New York for a Waterwell production of “Hamlet” set in Persia, in which Mr. Moayed was starring. “I knew exactly what I was walking into, because this was not the first time,” he said. “I’ve been dealing with immigration since I was a kid, so I know it’s complicated, even when it’s not complicated.”

But those involved with the push to bring “The Jungle” actors to New York said their success both illuminates the new obstacles for artists from restricted countries, as well as the possibility that those obstacles can be surmounted.

“Part of what makes the ending of this story really exciting is that it shows there are channels through this,” Mr. Covey said. “The U.S. immigration system is obviously very connected to the current administration, but there remain ways that the value of a piece like this can be recognized and can be supported, even though it does appear to run contrary to what we hear from the top of that administration.”