Daenerys’s fate is still very much up in the air as we head into the Game of Thrones finale this Sunday, May 19. After basically going all “Mad Queen” in episode 5, “The Bells,” Dany’s chances of actually getting control of Westeros are slipping away as those still loyal to her slowly realize she might not be the ruler the Seven Kingdoms need. Now, fans are wondering if GoT will reveal Dany is pregnant with nephew-lover Jon’s baby, which would not only affect whether she lives or dies but could be a total game-changer for who gets the throne.

Back in the halcyon days of season seven, Dany and Jon got it on while sailing from The Wall to Dragonstone. The pair were falling in love, with Jon officially bending the knee after cautiously getting close to Dany throughout the season and the mother of dragons realizing Jon would be a good match and a better ally. By the season finale, the two were knockin’ boots on a boat, blissfully unaware that they were related. At the time, Dany believed that the only children (albeit non-biological) she would have were her dragons, so this encounter was purely for fun. Jon’s cute, she’s cute, so why not?

But Dany has gotten pregnant before, but her pregnancy ended in the stillbirth of an apparently deformed, inhuman-looking baby and the subsequent death of her first husband, Khal Drogo. The loss of any possibility of having a family of her own rapidly changed Dany and she seemed resigned to the belief that something was wrong with her body. Dany’s grief was understandable, as was her belief that her body may not be able to create a child strong enough to survive birth. It’s a miracle that Dany even survived the birthing process (for centuries, Targaryen women all the way back to Aegon the Conqueror and his sister-wife, Rhaenys, have died trying to birth an heir), so it’s also possible Dany just didn’t want to try out of fear all she had worked for in her quest to reclaim the throne would be lost trying to preserve the Targaryen bloodline.

That said, we doubt there is any kind of effective birth control in Westeros aside from the pull-out method or blood magic and I get the sense Dany and Jon had sex more than once before they found out they were related. Given this and the fact it’s been years since her last pregnancy, it’s entirely possible she could be pregnant. Theoretically, season eight began shortly after the season seven finale, so Dany would still be in her first trimester (read: not showing) — Cersei was probably legitimately pregnant during the latter half of season seven and still wasn’t showing when she died in Jaime’s arms.

Fans have begun to suspect the GoT series finale will throw in the big plot twist that Dany is pregnant with Jon’s child before the credits roll for the final time. It would be the twistiest plot twist yet, but hey, the showrunners and writers of GoT clearly give no fucks about a logical story, just one worth watching, so why not reveal Dany is pregnant?

Of course, Dany is also still a threat and she could still be killed especially now that she is full Mad Queen. Fans have begun to worry about this, too, hoping with every fiber of their being GoT doesn’t decide to reveal this and fulfill the Azor Ahai prophecy by having Jon kill Dany to save Westeros.

If Dany is pregnant, I hope and pray Jon doesn’t actually kill her. Instead, there’s every chance she is removed from power but keeps her baby. She could choose her child over the throne because having that unconditional love she has searched for her entire life would fall right into her lap with a child. This would open up the throne for another leader to take and Dany could give birth to a child. Even if she died in childbirth — which, again, could totally happen because it’s common in her family — you know Jon would step in to raise their son or daughter into the same kind, honorable person he is and possibly make sure they takes the throne when he’s old enough (supposing Jon assumes the throne first). 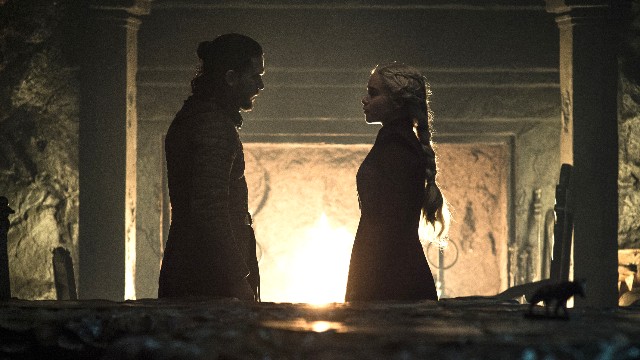 Listen, anything could happen at this point. As far as GoT theories go, this one is pretty tame.