On Fourth of July weekend in 2015, while Hillary Clinton campaigned in New Hampshire for the Democratic presidential nomination, theatergoers in Falmouth, Mass., got a look at a work in progress about her — Lucas Hnath’s play “Hillary and Clinton,” now poised for Broadway.

Set in an alternate universe during the 2008 primaries, as she fights for survival against a charismatic upstart, it was a comic tragedy, and it couldn’t have been more topical. Unfolding around a pivotal moment in the contest, it examined how the strictures of her gender and the baggage of her marriage affected her ability to navigate the men’s world of politics.

Hal Brooks, the artistic director of the Cape Cod Theater Project, remembers his audiences loving the series of staged readings. But he was so sure of the real Mrs. Clinton’s odds in 2016 that when he thought about the future of this play, rooted as it was in a failed White House run, he did have a concern.

“Once she’s president,” he said, “will anybody really be interested?”

Needless worry, that. Bad news for Mrs. Clinton seems to have been a stroke of luck for the play. So, apparently, has the uprising of feminist outrage that followed her defeat, propelling a wave of women into Congress this year and a pack of female candidates into the 2020 presidential race.

Starring Laurie Metcalf as Hillary and John Lithgow as Bill, and directed by Joe Mantello, “Hillary and Clinton” arrives at the Golden Theater in March amid a raucous cultural debate about gender politics and the double standard that women face.

Not a bad outcome, but a surprising one for a play that was written in 2008 and had to wait eight years for its world premiere — until Mrs. Clinton was once again waging a primary campaign. Directed by Chay Yew, it opened at Victory Gardens Theater in Chicago in April 2016.

Charles Isherwood, writing about that production in The New York Times, said that “Hillary” found Mr. Hnath (pronounced nayth) in “unusually cautious” form. But Chris Jones, in The Chicago Tribune, called the play “audacious, whip-smart, highly entertaining” and “an important piece of writing.” 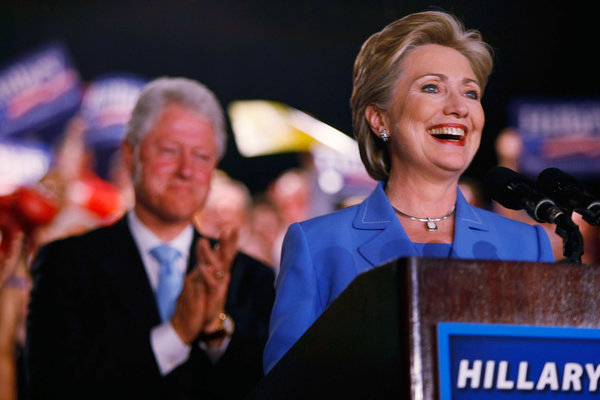 It’s a play that ponders how publicly tough Hillary has to be, how tender she can afford to be and whether it’s possible to strike a balance that won’t risk condemnation.

In the gap of years before he staged it, Mr. Yew said, the script “kind of bounced around to some theaters, and nobody knew what to do with it.”

“Also one wondered at the time, for some theaters, whether it was relevant,” he added.

Still, when he first read it in 2012, he recalls being smitten — finding it “utterly feminist and tragic” as it confronted “the eternal question of the role of women in society.”

In the summer of 2014, he directed a workshop of the play at the Ignition Festival at Victory Gardens, where he is the artistic director. In 2015, he and Mr. Hnath took “Hillary” to Cape Cod.

Then as now, it wasn’t meant as biography. Guarded and battle-scarred though she is, the Hillary in the play isn’t quite the Hillary Clinton from the news. The same goes for the men around her — her husband, Bill, though he’s still a thousand times more cavalier than she’ll ever be; her opponent, Barack (known in earlier versions of the play as The Other Guy); and her strategist, Mark Penn.

Like Mr. Hnath’s other plays about famous figures (Walt Disney, Isaac Newton), “Hillary” blends fiction with fact, aiming to subvert what audience members think they already know. But Laura Colleluori, who directed the play for Second Thought Theater in Dallas in January 2018, said the effect is to bring the audience closer to Mrs. Clinton.

“Talking about her as a fictional character is kind of the only way that we can have a fair conversation about the real woman,” she said. “It gives you the option, the chance, the request even, to grant her maybe a little bit of the humanity that 40 years in the public eye can kind of take away from you.”

In the version of the “Hillary” script published in 2017 by Dramatists Play Service, Mr. Hnath admonishes performers against imitating the real Clintons (“Don’t do it!”), then adds for directors: “Don’t even try to cast actors who look like these people.”

All of the show’s full productions leading up to Broadway have cast Hillary as an African-American woman, a directorial choice not required by the script. An audition notice for understudies and possible replacements in the Broadway production, three of whose stars are white, specified an ethnicity only for actors playing Barack, who must be of African descent.

The opening monologue in the published script asks the audience to consider the likelihood of “an infinite number of planet earths.” And then: “It would be very helpful if — as you watch this play — you were to imagine that the play takes place on one of those slightly different planet earths located billions of light years away from our own.”

Spectators, of course, don’t always do as they’re asked. Mr. Yew remembers that at Victory Gardens, “everyone brought their garbage, really, to the play”; whatever they were thinking about the election came into the theater with them. Some got upset, worried that “Hillary” would harm the real Mrs. Clinton’s chances.

That same spring, right after the Chicago run, Ken Rus Schmoll directed a production at the Philadelphia Theater Company. After the election, though, few other stagings followed. (Through a spokeswoman, neither Mr. Hnath nor anyone affiliated with the Broadway production would comment for this article, but Mr. Yew said that the playwright had been revising “Hillary.”)

The Hnath work that’s truly taken off is “A Doll’s House, Part 2,” which opened on Broadway in April 2017 and, according to American Theater magazine, is the current season’s most-produced play. The first Broadway show for Mr. Hnath, who until then was a downtown darling known for brainy experimentation, it won Ms. Metcalf her first Tony.

In “Doll’s House,” she played Nora, Mr. Hnath’s reworking of Ibsen’s classic character — a strong-minded, convention-breaking woman, a figure important to the cultural imagination and much deliberated there. The same could be said of Hillary Clinton, except of course that she is also a living human being.

In his notes for the published “Hillary,” Mr. Hnath sounds almost eager to discover how the play comes across without a Clinton candidacy hanging in the balance.

He wants audiences to be able to consider “what her runs for the presidency mean.” But if that’s going to happen, he warns, the tone of the production has to be just right.

Hillary — the one in his world, like the one in ours — knows that stage direction well.