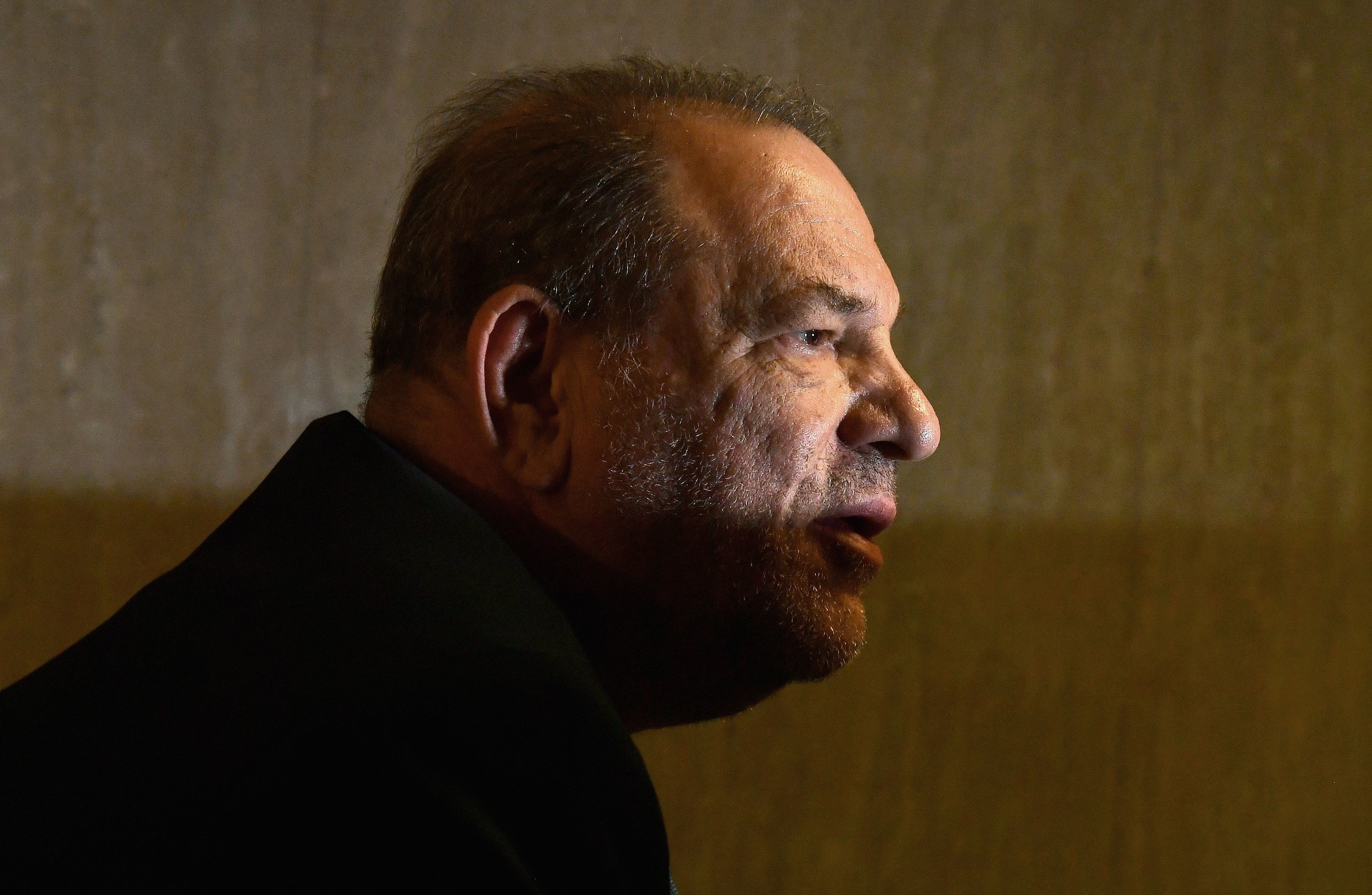 Harvey Weinstein in court on Monday.

A jury on Monday found Harvey Weinstein guilty of raping a woman and sexually assaulting another woman, and he has been jailed pending his March 11 sentencing. He was acquitted of the two most serious charges of predatory sexual assault that carried a possible life sentence.

After a six-week trial, jurors took four days to convict him after hearing the testimonies of six women, who provided harrowing accounts of how Weinstein used his power and influence to coerce them into nonconsensual and degrading sexual encounters.

The charges against Weinstein were based on the allegations of two of those women: An aspiring actor Jessica Mann said Weinstein raped her in a Manhattan hotel in 2013 and a former production assistant, Miriam Haley, said Weinstein forcibly performed oral sex on her in 2006. Actor Annabella Sciorra’s testimony that Weinstein raped her in the ’90s was used to bolster two predatory sexual assault charges against him in combination with the testimonies of Mann and Haley.

Weinstein was facing five charges, but per the structure of the charges, he could only be convicted of two charges at the most.

The jury convicted Weinstein of criminal sexual act in the first degree for forcibly performing oral sex on Haley and of third-degree rape in relation to Mann’s rape allegations.

Prosecutors had also called three other women — Dawn Dunning, Tarale Wulff, and Lauren Marie Young — to testify that they were sexually assaulted by Weinstein in order to establish a pattern of his predatory behavior over the years.

“This is a new landscape for survivors of sexual assault,” Manhattan District Attorney Cy Vance told reporters after the verdict. “These heroic women broke their silence to hold Harvey Weinstein accountable, and a generation of sexual assault survivors heard their every word,” he said.

Vance said he was not disappointed that the verdict did not convict Weinstein of the top two charges. He thanked the jurors and said “their verdict turned the page in our justice system on men like Harvey Weinstein.”

The key question facing the jurors was whether to believe the women, whom prosecutors almost entirely relied on to show that Weinstein was a “seasoned” sexual predator with a pattern of using his power to manipulate women who were trying to achieve success in Hollywood.

“Here the rapist was at the pinnacle, at the very profession his victims strived to make a career in,” Assistant District Attorney Meghan Hast said in her opening statement. “Thus, the power and balance he deviously exploited was not just physical, it was also professional and profoundly psychological.”

Mann, 34, — whose accusations were central to the case — gave horrific testimony about how Weinstein forced oral sex on her, raped her, and then manipulated her into a degrading relationship, which she said included him wanting to film her having sex, urinating on her, and asking if she liked his “big Jewish dick.”

She said that the confusion and fear she felt after the abuse made her continue to maintain a relationship with Weinstein, even after he raped and assaulted her.

Haley broke down on the stand describing how Weinstein sexually assaulted her twice over two years and said that she felt like an “idiot” after Weinstein raped her a second time.

Sciorra tearfully recalled that she did not report the rape to police because she felt confused about what happened.

Lead prosecutor Joan Illuzzi-Orbon said that Weinstein was the “master of his universe” who treated the women in his sphere of power as “disposables” who didn’t get to complain when they were “stepped on, spit on, demoralized, and raped, and abused” by the once-powerful Hollywood mogul.

But Weinstein “underestimated” these women, Illuzzi-Orbon said in her closing arguments. He didn’t expect them to “walk out of the shadows and call him exactly what he was: an abusive rapist,” she said.

Weinstein’s lawyers sought to convince jurors that it was the women who had manipulated Weinstein to get ahead in their careers and that their sexual encounters with him were consensual.

His lead lawyer, Donna Rotunno, said that prosecutors had written a script in which they created an “alternate universe” where “women are not responsible for the parties they attend, the men they flirt with, the choices they made to further their own careers, the hotel room invitations, they plane tickets they accept, the jobs they ask for help to obtain.”

His lawyers argued that what the women said happened was not “evidence.”

Weinstein’s defense team also played up old myths about sexual assault victims, questioning the women about their memory, their life choices, their appearances, and their choice not to report their sexual assault to the police.

His lawyers got other witnesses to describe how “normal” and “okay” the women appeared to be in the immediate aftermath of their assaults.

They particularly sought to discredit Mann and Haley’s credibility by questioning why they continued to have consensual sex with Weinstein and stayed in touch with him after the sexual assaults.

During her testimony, Mann sobbed uncontrollably and had trouble breathing when Rotunno repeatedly pressed her about why she had maintained a relationship with Weinstein after the assault, including asking him for professional and personal favors and sending him friendly emails.

“I know the history of my relationship with him,” Mann said after being grilled by Weinstein’s lawyers. “I know it is complicated and different, but it does not change the fact that he raped me.”

In her closing arguments, Rotunno urged the jury to make the “unpopular decision” to acquit Weinstein despite an “overzealous” prosecution and media.

“In this country, it’s the unpopular people that need juries the most,” she said.

“The only test that matters in this case is whether or not the credibility of these witnesses stand up to you,” Damon Cheronis, another Weinstein lawyer, told the jurors at the start of the trial.

Ultimately, the seven men and five women on the jury, decided that two of the women’s accounts were credible.