Shakespeare’s Globe theatre has staged a one-off performance of Hamlet for migrants at the camp in Calais known as the “Jungle” on Wednesday.

The show was part of a world tour which aims to perform Hamlet to as many countries as possible by April.

A synopsis translated into languages including Arabic and Farsi was handed out, along with bags of popcorn.

Abdul from Afghanistan, who has been in the camp for seven months, said: “It’s good. It’s making people happy here.”

About 6,000 people live in the Jungle in dangerous and unsanitary conditions.

The show was part of the Globe to Globe tour, which has also seen performances staged at migrant camps in Jordan, Djibouti and the Cameroon. 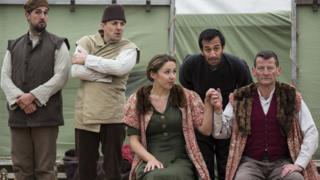 “The sheer scale of the refugee crisis demands a response, however small,” he added.

“It’s a great privilege to play for displaced people in Calais. As a theatre company, the only gesture we can offer is this – a show that we hope speaks to the human spirit at its greatest and its darkest moments.”

Tom Bird, the executive producer of Shakespeare’s Globe, said: “We are entertainers and there is a lot of boredom as well as a lot of need here.

“If we can give two hours of entertainment and diversion then it’s worth doing.”

The production was staged in partnership with Good Chance, a theatre company based at the Calais camp.

Joe Murphy and Joe Robertson, the artistic directors of Good Chance, said last week: “As a production which has travelled to audiences all over the world, it is fitting that it visits the camp here in Calais, where the fault lines of over 20 different nations meet.”

The Jungle show will be followed by a performance for Libyan migrants in Malta on Monday.

Unesco patronage was granted to the tour in 2014 in recognition of its engagement with communities and its promotion of cultural education.