LONDON — The writing’s on the wall, we’re told. Whether it was Johannes Gutenberg’s printing press in the 15th century, the invention of the typewriter 300 years later, or the emoji of today’s smartphones, the act of writing seems to be forever on the precipice of extinction, without quite falling off.

“Writing has never been static,” said Adrian Edwards, a curator at the British Library who put together the exhibition “Writing: Making Your Mark,” which runs through Aug. 27. “The marks we make on the page have always changed and developed in ways in tune with our needs,” he added.

“I think writing’s going to be around for quite some time to come,” Mr. Edwards said. 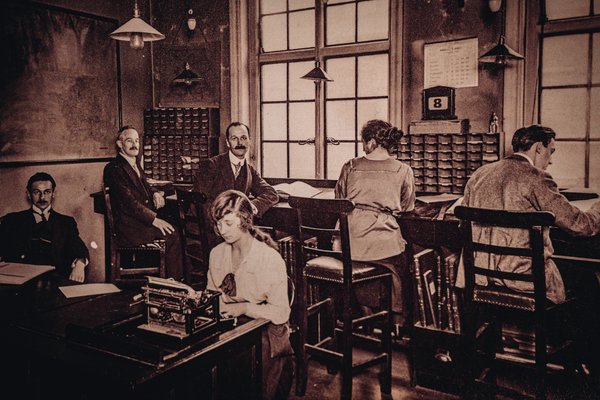 With 120 objects that represent 44 different systems of writing from the past 5,000 years, “Writing: Making Your Mark” examines the intriguingly similar past, present and future of writing, showcasing a Mesopotamian tablet that has an early form of cuneiform worked into its clay, an ancient Egyptian monument covered with hieroglyphs and the ink-stained, slightly damaged quill of the poet Alfred, Lord Tennyson.

The sheer breadth of the show suggests that writing will most likely never go away, even as new technologies change the definition of what it means to write.

And what does it mean to write, exactly? For one, writing is fundamentally an act of thinking. It would be wrong to define writing exclusively as the act of putting words onto a page, because it is ultimately about the conception and transmission of thought.

Surely, John Milton, who wrote “Paradise Lost” after going blind — he dictated it to his daughters — was still a writer, even though it was not his own quill touching the page. The same goes for Jean-Dominique Bauby, who suffered from locked-in syndrome, but managed to write “The Diving Bell and the Butterfly” by blinking when an assistant read out letters from the alphabet.

“In the past, the well-to-do often employed a scribe to do their writing for them,” said Nick Bostrom, the director of the Future of Humanity Institute at the University of Oxford, “which is not so different from using an A.I. speech-recognition system.”

Modern forms of writing can be frightening in their speediness and apparent thoughtlessness, but what we find most disturbing about writing’s latest iterations — like someone quickly drafting a message with autocompleted sentences and looped GIF images on their smartphone — is the apparent lack of care involved. A video in the exhibition wonders how we might wish someone “happy birthday” decades into the future. Already, today, many of us simply see a birthday on Facebook and toss out a “like” or WhatsApp a hasty “HBD!”

“The vital signs aren’t good,” said the futurist Richard Watson, the author of “Future Files: A Brief History of the Next 50 Years” and a lecturer at Imperial College London. “We don’t really write anymore, we just type. We just thumb through a stream of consciousness.” Writing on paper by hand, he said, “is so very different to typing or texting on a screen. It’s slower, deeper, more reflective, more real.”

To be fair, though, even typing comments on Instagram or adding text to Snapchat requires a series of judgments. The difference is that these decisions have limits: There’s a controlled amount of space, and if using emoji, a restricted number of symbols. Alphabets throughout history, from the Phoenician to the Roman, have fluctuated in what they have allowed their speakers to convey. Emoji, in this sense, are nothing new.

Literary writing is easily romanticized, even fetishized, but the written word has more mundane uses, too. A Mesopotamian tablet in the exhibition that is inscribed with a record of how much barley to pay farmhands for their work is a perfect example. Writing is what we make of it.

It can also provide an emotional link to the past. One of the most moving objects in the exhibition is an Egyptian schoolchild’s homework from the second century A.D. done on a wax tablet. An instructor has written out two lines in Greek, which the student has tried and failed to copy below. The student forgot the first letter then couldn’t finish the sentence because they ran out of space.

The slow abatement of handwriting today feels like the severing of a historical tie. It relates us to the Mesopotamians, to Chaucer, to that struggling Egyptian student. Finland, for instance, has dropped its handwriting requirements in schools in favor of typing lessons. In the United States, in 2010, Common Core standards excluded cursive requirements in elementary schools, and most states no longer require students to learn it. (In some, however, there are signs of a cursive comeback.)

Will the historical cycle of doubting writing before it proves itself again continue? On the one hand, we should have faith: Writing has resurged time and again. On the other, technology is advancing at a pace like never before. Will the future of written expression become so simple — a smattering of autocompleted sentences, emoji and GIFs — that it will lack any critical thought at all?

“I certainly do not expect writing to go away,” said Mr. Bostrom, of Oxford. At least, he added coyly, not within “the finite period of time remaining before machine intelligence makes human intelligence irrelevant.”