PARIS — Long-separated siblings looking to avenge their father, an ancient dynasty under threat, savage murders and even a penis chopped off. No, this isn’t the final season of “Game of Thrones” but two plays written nearly 2,500 years ago: Euripides’ “Electra” and “Orestes,” newly staged at the Comédie-Française by the Belgian director Ivo van Hove.

The production is a timely reminder that for a fraction of the cost of big-budget TV and movies, theater can still hold its own when it comes to larger-than-life sagas. Mr. van Hove’s operatic, mud-soaked “Electre/Oreste” finds psychological truth in Euripides’ classical tragedies — with the help of a little choreography in lieu of CGI.

The tireless director has combined the two plays into one uninterrupted staging, a strategy he has used in the past: His “Roman Tragedies” (2007) and “Kings of War” (2015) each stitched together several Shakespeare plays. Euripides’ “Orestes” picks up five years after the conclusion of “Electra,” but it’s as if no time has passed. After Electra and Orestes conspire to kill their mother, Clytemnestra, and her lover in the first play, the siblings face justice and spiral into further violence in the second.

None of the elements that make up Mr. van Hove’s production are especially original on their own. A quartet of percussionists is in the background throughout and creates an ominous soundscape for the action, in a manner reminiscent of classical Japanese theater. (This is acknowledged in the playbill.) The thick layer of mud onstage, meanwhile, brings to mind Pina Bausch’s earthy “Rite of Spring,” and the comparison doesn’t stop there. The action is interspersed with ritualistic dance scenes led by Electra and the Chorus, who beat their chests and fall repeatedly into the mud. While the choreography was created by Wim Vandekeybus, it is indebted to the raw, primal spasms that drove Ms. Bausch’s dancers to exhaustion.

Yet Mr. van Hove knows exactly how to measure his ingredients, and he draws maximum tension out of the interplay of dance, music and text. “Electre/Oreste,” which will be shown live in cinemas worldwide on May 23, is aesthetically very different from the director’s first production for the Comédie-Française in 2016, a video-heavy adaptation of Luchino Visconti’s film “The Damned.” Still, both productions lay bare the brutality of intergenerational tragedies, and the subtle ways in which violence begets violence over time.

A number of Comédie-Française actors from “The Damned” return in “Electre/Oreste,” starting with the idiosyncratic Christophe Montenez, by turns rabid and vulnerable as Orestes. Elsa Lepoivre plays the two women murdered by the siblings, Clytemnestra in “Electra” and her sister, Helen, in “Orestes,” with beautiful attention to detail. When Clytemnestra visits Electra, who was married off to a poor peasant, her awkward stumble as she steps into the mud in a gown and heels speaks to the class differences Euripides examines in the play.

Those divisions are evident throughout. The noble characters’ royal blue costumes stand out against the brown and black color scheme, and quickly stain in the mud. Electra is highly conscious and ashamed of her social demotion, and yet, at times, embraces it as a form of liberation.

She is by far the most interesting character in the plays, with an inner resolve and appetite for violence that outstrip her guilt-stricken brother’s, and Mr. van Hove found the right actress in the underrated Suliane Brahim. With her cropped hair and tattered shorts, Ms. Brahim cuts an androgynous figure, who doesn’t just maim Clytemnestra’s lover, Aegisthus, but bites into his dismembered genitals before throwing them at the Chorus.

Electra’s relationship with the members of the Chorus is one of the strengths of “Electre/Oreste.” As the peasants wash themselves from the same bucket as Ms. Brahim and join her in fervent dances, they seem like a surrogate family, joined in misery.

Mr. van Hove has made some cuts to Euripides. He skips the divine apparition at the end of “Electra,” for instance, but maintains the deus ex machina that concludes “Orestes.” Apollo (Gaël Kalimindi) appears to restore the peace, and tells Orestes that he must marry Hermione, Helen’s daughter, whose throat he was just about to slit. (A few awkward laughs ensued.) But then, as the god disappears, in a final flash, we see Orestes about to stab Hermione regardless. In Mr. van Hove’s world, violence isn’t so easily stemmed. 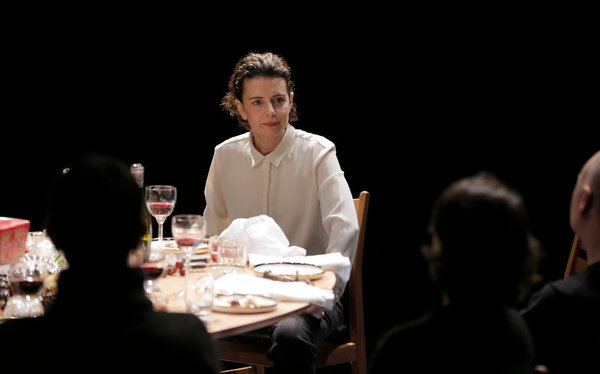 The British playwright Dennis Kelly thanks Euripides in the acknowledgments for “Girls and Boys,” staged by Mélanie Leray at the Théâtre du Petit Saint-Martin, and it’s not hard to see why. The family killings at the play’s heart reverse the story of Medea, the subject of another of the Greek tragedian’s plays. Here, it’s a father who takes revenge on his estranged wife by murdering their two children.

It’s a grim plot, and to Mr. Kelly’s credit, he builds up to the crime masterfully. “Girls and Boys” is a monologue told from the perspective of the unnamed mother, and it’s easy to miss the clues in the first half that horror awaits. While she tells us in the first sentence that she took an “instant dislike” to her future husband, her recollection of their first encounter, in Italy in the queue to board an easyJet flight, is delightfully funny. (My companion, who hadn’t read the playbill, thought she was in for a comedy about a marriage.)

“Girls and Boys” had its initial run in London and New York last year, starring Carey Mulligan. For the French premiere, Ms. Leray cast Constance Dollé, another experienced stage and film actress. Her performance has already earned her a nomination at the Molières, France’s most prestigious theater awards, and it’s well deserved. She takes to the role with an irrepressible animation that eventually makes her understated pain near the end all the more striking.

Mr. Kelly doesn’t specify to whom or where the woman is telling her story, but here, she isn’t completely alone onstage: Every night, four volunteers from the audience sit around a set dinner table with her. They aren’t required to interact, but their presence enhances the text’s conversational feel. One recent night, the three women and one man at the table nodded and tutted at regular intervals as Ms. Dollé’s eyes darted among them.

Philippe Le Moine’s French translation of “Girls and Boys” captures the woman’s working-class background and pluckiness. She is a bright, self-aware narrator, stopping at times to relive memories with her absent children before adding matter-of-factly: “I mean it’s not like I think they’re actually here.” Ms. Dollé’s character may be struggling to make sense of her own story, but she won’t be victimized, even in the face of unspeakable tragedy.