Creative motivation can be mysterious. Who knows exactly why most artists embrace a medium, a metaphor or an image and pour their lives into it?

But for the artist Zina Saro-Wiwa, the wellspring of her art is brutally straightforward: Her father, the Nigerian writer and anti-oil activist Ken Saro-Wiwa, was executed in 1995 by Nigeria’s military dictatorship for his work fighting environmental degradation and corruption in Ogoniland, the home of the country’s Ogoni people.

“I literally didn’t deal with it at first,” said the Brooklyn-based Ms. Saro-Wiwa, seated in her Crown Heights apartment. “I never cried about his death, nothing. I just sort of buried everything. And 10 or 12 years later I realized I had to do something about it. It was sort of bubbling up.”

Eventually it emerged in a way that she couldn’t have predicted. This week at Art Basel Miami Beach, her London gallery, Tiwani Contemporary, will display her video series “Table Manners” in the Nova sector.

The ongoing series, which began in 2014, shows people from the Niger Delta while they are eating. Just eating. The titles of the works are taken from the name of the performer and the food: “Felix Eats Garri and Egusi Soup,” for instance. As it has gone on, the series has taken a somewhat darker turn, with the subjects eating snake and other animals that appear in local folk tales.

Ms. Saro-Wiwa has a longstanding interest in the metaphorical idea of nourishment, and the condition of the places that grow the things we eat. “Food is huge for me,” she said, after putting out a plate of vegetables, sausage and crackers for a visitor.

Trevor Schoonmaker, deputy director and contemporary art curator at Duke University’s Nasher Museum of Art, included “Table Manners” in last year’s edition of the triennial Prospect New Orleans, which he organized. He said that her work got at “the vulnerability of people when they’re eating.”

“It’s a great leveler,” Mr. Schoonmaker said. “We all have to do it to survive.” Although Ms. Saro-Wiwa said that she is addressing “autonomy, creativity and environmentalism,” she said she doesn’t consider herself an activist, and she doesn’t directly tackle policies or governments in her work. Her website says that her specialty is “mapping emotional landscapes.”

Mr. Schoonmaker added that her somewhat elliptical approach to the subjects was “part of the charm. It doesn’t come at you head-on.”

Ms. Saro-Wiwa’s diverse interests — which have included the Nigerian film industry, known as Nollywood — have propelled her to some early successes, given that she dates her art career only to 2010. The winner of a Guggenheim Fellowship, she had a solo show at the University of Houston’s Blaffer Art Museum in 2016. 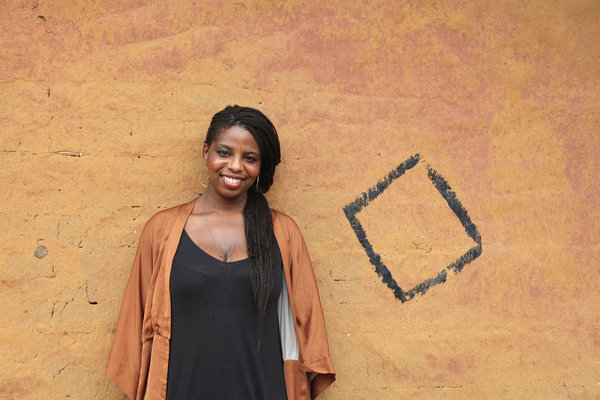 For many, watching the “Table Manners” videos can have a strangely hypnotic effect.

“It’s inclusive and confrontational at the same time,” said the curator Claudia Schmuckli, who showed part of it when she was at the Blaffer and who now works at the Fine Arts Museums of San Francisco. “Zina comes out of a documentary tradition, but she branched out to embracing it as an art form.”

Ms. Saro-Wiwa, 42, grew up in England and was educated there. After working as a journalist for BBC Radio, she made a 2008 documentary called “This Is My Africa” that began her transition to the art world, after which she moved to New York.

“The journalism part of my life was coming to an end, and I was going to become an artist — I just didn’t know at the time that I moved,” she said. “And I think Obama had a lot to do with it as well. There was something about him and the hope of him.”

She said that being in New York afforded opportunities that Britain didn’t, but much of her recent art was actually made during a two-and-a-half year stint in Nigeria. Her stay led to work like “Table Manners” and a series about evangelical Christian pastors in Nigeria, “Prayer Warriors: The Survival Performances.” She also established a contemporary gallery, Boys’ Quarters Project Space, in the city of Port Harcourt, that she still curates from afar.

“She’s an incredibly determined person,” Ms. Schmuckli said. “She went back to her hometown, where there is no cultural infrastructure to speak of, and little awareness of contemporary art, and opened a gallery so that it would a be a generative force for the community.”

Displaying that attribute may be a family tradition. Though Nigeria now has a democratic government, Mr. Saro-Wiwa’s execution, and the conditions that he was protesting, have continued to provoke outrage long after his death. In 2011, the United Nations Environmental Program issued a report saying it would take 30 years to repair the damage caused by oil exploration in Nigeria.

Jessamyn Hatcher, a professor of liberal studies at New York University who recently interviewed Ms. Saro-Wiwa as part of the school’s global lecture series, said that the artist “seems to be trying to find some space to get her relationship with her father back.” She pointed to the fact that Boys’ Quarters Project Space is in her father’s old office.

“He was overtaken as a person and became a symbol,” Ms. Hatcher said. “How do you make some room for yourself in there? She used art.”

Ms. Saro-Wiwa said she didn’t know exactly what her next project would be. As she considered ideas — one of which may involve a type of gin from Nigeria — she gave her own summation of her trajectory thus far.

“It turned out that art was going to be my way of having my own language,” she said.