It’s a vision of two Detroits that have mostly faded now — the social set born of the American auto industry’s vast wealth and the galvanizing magic of ’60s Motown — together in a room.

In June 1965, the Supremes, one of America’s biggest and most glamorous groups, performed at a debutante party at the Country Club of Detroit in Grosse Pointe, Mich., the posh all-white enclave just northeast of the city. 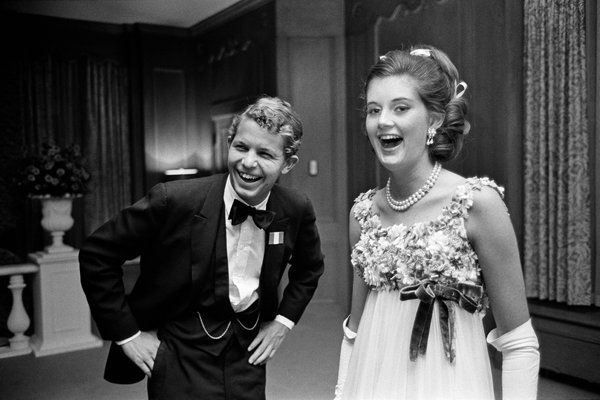 It was the debutante party of Christy Cole Wilson, and The New York Times pictures of the event tell a layered story of two groups connected, at least for the evening, by the music of that time and place.

The three elegant darlings of Detroit, led by the 21-year-old Diana Ross, serenade a room of finely attired guests, many of practically the same age. But between the groups were also the realities of race and class — the distance between Grosse Pointe and the Brewster projects where the Supremes grew up, 10 miles and several worlds away.

The Times covered the lavish event in avid detail. “It took three days, hundreds of fresh blue irises, thousands of little Italian lights and hundreds of thousands of yellow plastic flowers to turn the club into a French garden,” the story enthused. “Whole walls had disappeared behind Austrian silk panels of gold and mirrors before the 750 guests arrived.”

Not until the eighth paragraph did the story mention that “when they were not dancing and being entertained by a rock ‘n’ roll group called the Supremes, the Wilsons and their guests were polishing off 20 cases of French champagne, attempting to create a liquor shortage (the plot failed), and heaping their plates with food from an abundantly stocked buffet table.”

The trio hardly needed an identifier at that point. Between August 1964 and June 1965, the Supremes had five No. 1 singles, including “Baby Love,” “Stop! In the Name of Love” and “Back in My Arms Again,” which had gone to the top of the charts just six days before this party. Which is exactly why Ms. Wilson’s parents hired them.

“Everyone had very glamorous deb parties when I was growing up,” said Ms. Wilson Hofmann, 72, who now lives in Bristol, R.I.

Her father, Ralph C. Wilson Jr., a millionaire insurance scion who had “a stable in Lexington, Ky., and the Buffalo Bills football team,” seemed happy to toast his daughter in such style. The event reportedly cost $85,000, which would be roughly $675,000 today. (This was just the hometown event; the 18-year-old Ms. Wilson had already been formally presented at the Debutante Cotillion and Christmas Ball in New York in December 1964.)

It was an era when families of distinction across the country presented their daughters to society, with the intention that suitable men from similar backgrounds would meet their future wives. In Grosse Pointe, it was the “Ford girls,” the great-granddaughters of Henry Ford, who had ramped up the deb-ball arms race. Nat King Cole sang at Charlotte Ford’s storied party in 1959, while Ella Fitzgerald performed at her sister Anne’s soiree in 1961.

Racial dynamics were changing in the 1960s, but often in fits and starts. The Supremes performing at a private club in Grosse Pointe, which still had no black residents, reflected this lurching progress.

“Music filtered in,” said Izzy Donnelly, the director of education at the Grosse Pointe Historical Society. “The ’60s were about breaking tradition. Bringing black entertainers to debutante balls and private clubs was putting a big foot in the front door.”

It wasn’t an intentional political statement to hire the Supremes to perform at her party, Ms. Wilson Hofmann said. She chose them because she loved their music, and she was from a family that could make her request happen.

“I grew up in Grosse Pointe and loved the Supremes and that kind of music, like the Temptations and Marvin Gaye,” said Ms. Wilson Hofmann.

“They were extraordinarily popular with white audiences, black audiences and everyone else,” said Dolores Barclay, an author and adjunct professor at the Columbia University Graduate School of Journalism, who collaborated with Diana Ross on the singer’s memoir. “Appearing in white venues was breaking down racial barriers. But it’s a different type of disruption. It’s nonconfrontational. It’s having a platform and saying, ‘Yes, we’re here, we’re great and we’re a part of American music.’”

The Supremes were homegrown celebrities in Detroit and received star treatment, but there were black entertainers across the country still entering clubs and performance halls through the kitchen.

“Anything in the South was still tenuous,” said Coraleen Rawls, collections manager at the Motown Museum in Detroit. “On one hand, we had artists who were happy to perform because that’s their passion and vocation. But it was also disheartening to be international stars and still be treated differently.”

Just two years after Ms. Wilson’s debut, Detroit would experience the devastating unrest of 1967, as the city’s racial and economic disparities exploded into national awareness. And the Motown sound would prove to be a powerful force in the healing process.

“It unified people and brought us all together,” Ms. Rawls said. “Where there were ropes between whites and blacks, those ropes started disappearing, as the people on both sides were like, ‘We’re all dancing. Why do we have to have a rope in the middle? You’re dancing, I’m dancing. We’re singing, you’re singing, so why do we have to be separated by some rope because of some thoughts prior to our generation as to how you think we should be?’”

The year after the Supremes played Ms. Wilson’s party, the first black family moved to Grosse Pointe, and by 1974, The Times reported that three African-American families called the town home. In 2019, Grosse Pointe Farms, where the Country Club of Detroit is, remains 94 percent white, while the city of Detroit is 79 percent black.

The deb parties continued in Grosse Pointe, albeit in a scaled-back fashion. In 1970, The Times covered the celebration for Sheila Ford, another heir of the automobile family. She opted for a short purple dress instead of traditional formal attire, and hired the group Sha-Na-Na, who “played what the listeners called real modern blues music.”