Backstage at the Metropolitan Opera, a rehearsal pianist was ready to launch into Wagner’s famous “Ride of the Valkyries.” But before the battalion of singers could unleash their war cries — “Hojotoho!” — the conductor, Philippe Jordan, paused to offer a brief elocution lesson.

“Hoy-yo-TOE-hoe,” Mr. Jordan said, emphasizing the crisp “T,” which can easily get lost amid all those high-decibel vowels. “TOE-hoe.”

He gave a nod; the pianist thundered into the familiar, galloping rhythms; and the eight Valkyries began to sing — powerfully enough to shake the floorboards of the small rehearsal hall.

“Yes!” Mr. Jordan cried approvingly, having nailed down one of the myriad details needed to bring Wagner’s epic “Ring” to life. “I heard the ‘T’! One more time.”

Conducting the four operas of the “Ring” — about 15 hours of music — is a test of endurance and artistry unlike any in opera. For the revival of Robert Lepage’s production this year, which continues through May 11, the Met has entrusted the task to Mr. Jordan, 44. Relatively little known in the United States, he stands at the crossroads of a major career in Europe: Having spent nearly a decade leading one of the world’s most storied opera companies, the Opéra National de Paris, he is now preparing to become music director of the grand Vienna State Opera in 2020.

[Read about the breakout star of the Met’s “Ring.”]

[Take a look at the Met’s daring Brünnhilde.]

But he is spending this spring rehearsing and performing the “Ring” in New York. Despite the relentless pace, he said, it felt almost like an idyll. 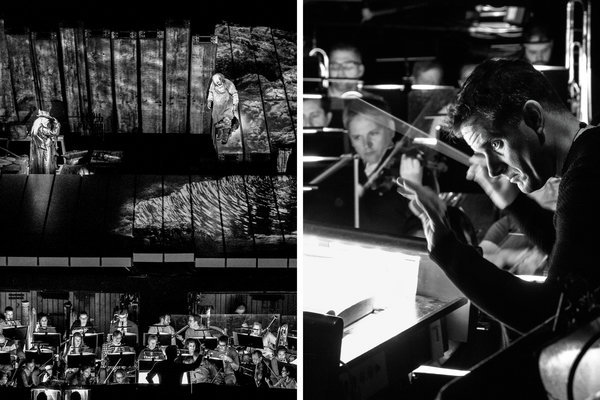 “It’s good for three months to just focus on music,” Mr. Jordan said as he ate lunch between an orchestra rehearsal of “Siegfried” onstage and a piano rehearsal of “Götterdämmerung” in the Met’s basement. “To just think about Wagner, and not the next audition, or planning meeting, or union meeting.”

Mr. Jordan is something of a rarity: a second-generation Wagner conductor. His father, Armin Jordan, conducted a number of acclaimed Wagner performances around the world, as well as the soundtrack of Hans-Jürgen Syberberg’s beguiling, experimental 1982 film of “Parsifal.” Illness curtailed the elder Mr. Jordan’s plans to conduct the “Ring” in Seattle at the beginning of this century, and forced him to cancel a planned Met debut; he died in 2006.

Now his son is emerging as a major Wagnerian, leading acclaimed performances of the master’s works in Paris; at Bayreuth, the festival Wagner founded in Germany; and now at the Met, where his propulsive but intense “Ring” is earning strong reviews. Before he leaves his position in Paris, Mr. Jordan will conduct a new production of the “Ring” next year, staged by Calixto Bieito.

It was not always a given that this would be a podium dynasty. Mr. Jordan said that his father had initially been skeptical of his desire to conduct. “He didn’t really believe in that,” Mr. Jordan recalled. “So I had to prove it.”

He learned the craft the old-fashioned way: as a musical jack-of-all-trades at a small but busy German opera house, the theater in Ulm. “It was very bizarre: I started conducting, and my father was watching a little bit, and he became very supportive,” Mr. Jordan said. “All the doubts he had before turned around the other way. I got all the doubts; he was more encouraging.”

He got a grounding not only in opera but also in operettas and musicals; his first piece was “Funny Girl,” and he said he did “West Side Story” dozens of times. It was the approach favored by his father, who wanted him to learn the practical aspects of conducting by doing it, rather than going the route of conservatories, competitions and sporadic concerts. After several seasons in Ulm, Mr. Jordan became an assistant under Daniel Barenboim at the Berlin State Opera.

“The orchestra is the best teacher,” Mr. Jordan said. “You get an immediate response if it works or if it doesn’t work.”

At the Met, shortly after his Valkyrie diction lesson, he found himself leading a rehearsal of “Siegfried” one morning without his baritone — so he gamely sang some of the lines himself. This kind of multitasking is key to the “Ring.” After spending another morning fine-tuning orchestral passages in “Siegfried” — “Chamber music now!” “More leggiero; lighter!” “Now, really fortissimo!” — he went to his dressing room to switch scores, which were piled in a tall stack in his locker above his shiny patent-leather shoes and below his white tie and tails. Then he spent the afternoon working with the honey-voiced heldentenor Andreas Schager on his death scene in “Götterdämmerung.”

Mr. Jordan’s approach to Wagner has evolved. “Every young conductor takes Wagner slow at the beginning, to enjoy the sounds and everything,” he said. “But it should go at the speed of the text.”

He said he had also come to realize that many Wagner works are played more loudly and heavily than the composer intended; he cited the opening of “Die Meistersinger von Nürnberg,” which he conducted in Bayreuth, as a prime example.

For decades at the Met, the “Ring” was the province of James Levine, its longtime music director. But in 2011, midway through the introduction of Mr. Lepage’s much-debated production, Mr. Levine was sidelined by a spinal injury and replaced by Fabio Luisi. The Met’s post-Levine “Ring” era had begun. Mr. Jordan was cast for this revival even before the Met fired Mr. Levine last year amid allegations of sexual abuse and harassment, which he has denied.

Mr. Jordan’s reviews have been positive. When the run began with “Das Rheingold” last month, Anthony Tommasini wrote in The New York Times that he “led a refreshingly lithe and transparent account of ‘Rheingold,’ keeping things fleet and colorful during playful stretches, but drawing out dark, heaving undercurrents when the music turned ominous.”

Now the eyes of the opera world are on Mr. Jordan as he prepares to assume the musical leadership of the Vienna State Opera, led in the past by Mahler, Richard Strauss and Herbert von Karajan. He was hired there by Bogdan Roscic, who will become the company’s next director in 2020, and who said he had been impressed by Mr. Jordan’s success in lifting the musical quality in Paris.

“I just caught myself going more and more to Paris,” said Mr. Roscic, who is currently the president of Sony Music Masterworks. “Whereas 15 years ago — I don’t want to say it wasn’t on the map, that would be arrogant, but it just did not have the same relevance.”

Mr. Roscic described Mr. Jordan as a conductor who “transcends national schools or specialties.” In Paris, he has led Berlioz operas and a starry new production of Verdi’s “Don Carlos” in the original French; and with the Vienna Symphony, where he has been music director since 2014, he conducted a Beethoven cycle, performed Tchaikovsky and reclaimed Bach from the world of historically informed performance.

Mr. Roscic offered a few hints about their plans in Vienna, including a focus on Wagner and Richard Strauss. “But Philippe will also conduct Italian opera of the 19th century; he will conduct 20th-century masterpieces,” he said. “He will conduct Mozart — which we have sworn will be a special focus of our work there.”

Mr. Jordan plans to step down from the Vienna Symphony to devote himself to the opera — and, in a rare move in an age of jet-setting maestros, he does not plan to take a post at another orchestra, at least in the beginning. The Vienna State Opera has not had a music director since 2014, when Franz Welser-Möst abruptly resigned.

“I think the house needs more presence of a music director,” Mr. Jordan said, adding that he plans to conduct 30 to 40 performances a season, including two or three new productions.

But all that is more than a year off. Right now he is focused on “Götterdämmerung” — the last installment of the “Ring,” which will open on April 27 — then on doing two cycles of the “Ring” operas, each within the course of a week, as Wagner intended.

Christine Goerke, the soprano singing Brünnhilde, recalled that when she and a colleague began discussing free will and their characters’ motivations at one rehearsal, Mr. Jordan eagerly joined in.

“He put all his stuff down and came onto the set and sat down with us,” she said. “He was really excited about it. I thought, this is going to be good.”