“A week ago I was dancing a bourrée,” the conductor William Christie said over the phone from Paris, where his baroque ensemble, Les Arts Florissants, is based. “A group of us sang a little song around the fire, and we all danced.”

This impromptu dance erupted at the inauguration of a 17th-century fireplace in a house in the Loire that’s part of a complex where the Fondation Les Arts Florissants now resides. But it could almost describe a moment in the program his ensemble is bringing to the Brooklyn Academy of Music this week under the title “Rameau, Maître à Danser.” These works, too, were written to celebrate happy events — in one case, the birth of a king — and involved singing and dancing, in equal measure.

The French court loved to dance, a passion that can be traced to Louis XIV, an avid dancer and a supporter of the creation of the Royal Academy of Dance, where the basic positions and movements of ballet were first codified. “Everyone danced in France,” the Baroque dance specialist Catherine Turocy said in a phone interview from her home in Dallas. “The singers danced, the dancers sang, and everyone played instruments. In that sense it was more like today’s musical theater.” 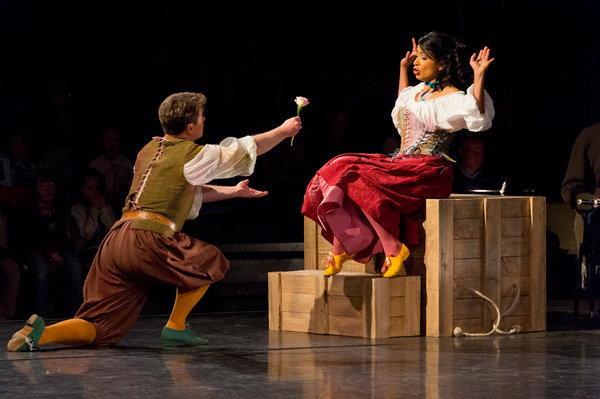 All the 17th- and 18th-century French opera forms included dance, from the solemn tragédie lyrique to the lighter opera-ballets, the loose genre to which the works of “Rameau, Maître à Danser” belong. “Daphnis et Eglé” and “La Naissance d’Osiris” were composed for the court of Louis XV, to be performed at the palace of Fontainebleau, where the royal family (and much of the aristocracy) retired each fall in to enjoy the hunt.

The two operas were performed in successive seasons — 1753 and 1754 — and seldom since, which is why Mr. Christie decided to revive them in 2014, on the 250th anniversary of the composer’s death. (The Brooklyn Academy’s production is the show’s American premiere.)

Each about 45 minutes long, neither of the two works would have taxed the attention of the aristocratic audience with complicated plots or deep subjects. “The plots are essentially nonexistent,” Mr. Christie said. “It’s just exquisitely beautiful music, tender and melancholy, and fabulous for dancing.”

There is just a whisper of a plot or, more accurately, a dramatic situation. In “Daphnis et Églé” (1753), a shepherd and a shepherdess approach the Temple of Friendship, only to be turned away, because, as Cupid points out to them, they are actually in love. In “Osiris,” shepherds and shepherdesses (notice a theme) await the birth of the god Osiris. (The piece, called a “ballet allégorique,” was meant to echo the birth of the future Louis XVI.)

“It was my idea to make the two works into one story,” the director, Sophie Daneman explained from London, where she lives. “I thought, gosh, they’re very similar: They’re both incredibly pastoral, and in that sense, very human.”

While the musical values of the Arts Florissants ensemble are faithful to what is known of the historical style, the dancing, like the staging, is more fluid. “There are elements and suggestions of period style,” Mr. Christie said, “but this has nothing to do with pure period staging.” Ms. Daneman noted that Mr. Christie “doesn’t have a strong philosophy on whether something should be ‘authentic.’ He’s more interested in authenticity of spirit.”

In this spirit, the dances are not meant to replicate Baroque styles, though they do make reference to their vocabulary of small jumps, elegant footwork and decorative wrists. Originally choreographed by Françoise Denieau, who died in 2015, the dances are being restaged for this run by her assistant, Gilles Poirier.

“For the most part,” Mr. Poirier said from Paris, Ms. Denieau “wanted to use a slightly later style of dance, closer to Noverre,” the ballet master who taught Marie Antoinette and the 19th-century Danish choreographer August Bournonville. (Bournonville enthusiasts will immediately spot the buoyant style.)

She even included a moment that is closer to something like contemporary dance, using expansive and stylized gestures that Noverre could not have imagined. “Françoise wanted that part to be in a style that was more undefined,” Mr. Poirier said, “neither classical nor contemporary” as a way to evoke timelessness.

Mr. Christie conducts the ensemble of period instruments from the back of the stage, close to the singers and dancers. At one point, a musician becomes part of the action: A French bagpipe player slowly traverses the stage, surrounded by the entire cast.

This leads into the final number, a contredanse, the French version of English country dancing. The dancers and singers form concentric circles, executing simple steps, weaving in and out. As in Mr. Christie’s celebratory bourrée by the fireside, everybody dances. Everybody sings.