Edith O’Hara, who started the 13th Street Repertory Company in Greenwich Village in 1972 and made it a quirky mainstay of New York’s Off Off Broadway scene, keeping it going through the decades while countless other companies fell by the wayside, died on Oct. 16 at her home, an apartment above the theater. She was 103.

Ms. O’Hara didn’t move to Manhattan until midway through her long life, but once she did she plunged into the theater scene with gusto. Her children called her the Hurricane.

She had come to the city from Warren County in northwestern Pennsylvania, bringing a show she had developed at a small theater she founded there: a musical called “Touch,” about young people trying the communal life. In the age of “Hair,” it found an audience, enjoying a two-year run.

Ms. O’Hara was smitten by the bohemian theater scene. When a building at 50 West 13th Street was advertised as being for rent and containing a small theater, Ms. O’Hara took a lease, and the 13th Street Rep was born.

The theater was never the type of feeder institution that sends plays to Broadway, but it had its place in the city’s theater ecosystem.

“It was an initial stop for many people who arrived in New York,” said Albert Poland, a theater historian whose publications include “The Off Off Broadway Book,” written with Bruce Mailman. “I would say it was a nurturing place.” 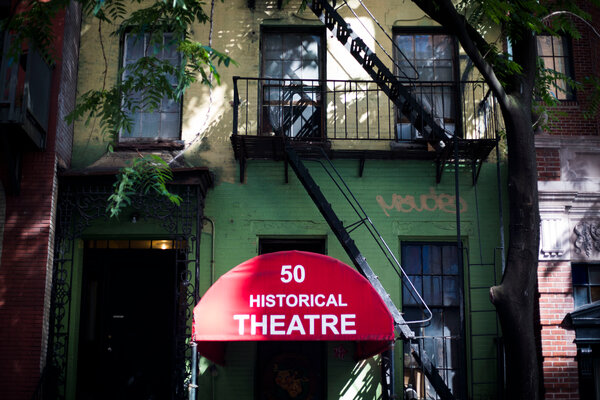 The theater offered a place for playwrights to try out new works and for would-be actors to test their skills. And it was not without its long-running successes. An Israel Horovitz play, “Line,” which opened there in 1974, was still running until recently, its cast ever-changing; it lays claim to the longest run in Off Off Broadway history. The comic monologuist Brother Theodore, who died in 2001, did a regular show there for almost two decades.

Ms. O’Hara joined a partnership that acquired the building in the early 1980s, but about 15 years ago she became embroiled in a protracted legal dispute as the building’s majority shareholder, a bookseller in Baltimore, first sought to buy her out, then threatened to evict her when she declined to sell. A settlement in 2010 allowed her and the theater to stay until her death.

Joe John Battista, who became the theater’s artistic director five years ago and has tried to bring a more businesslike approach to its programming and finances, said in a phone interview that the future of the 13th Street Rep was unclear, especially in light of the pandemic. But he vowed to keep it going in some form.

That Ms. O’Hara had managed to do so for so long, he said, was “a miracle,” given the pressures of producing theater in New York.

“Edith had such a big heart,” he said. “She gave so many people, whether they really deserved it or not, a chance to come in and try to create.”

Her story began a long way from the bright lights of Manhattan. Edith Mildred Hopkins was born on Feb. 15, 1917, on a farm outside Coeur d’Alene in northwest Idaho. Her father, Oscar, was a logger, and her mother, Mary, who died when she was a girl, was a homemaker.

“Growing up, I never heard the word ‘theater’ because I was born in the wilds of northern Idaho, and we were up in the mountains,” Ms. O’Hara said in “A Home in the Theater,” a 2010 documentary directed by Melodie Bryant about Ms. O’Hara and her fight to save the theater. “My father had a logging camp — no telephone, no electric power lines up there, no indoor plumbing.”

There was a one-room school, but it went only through sixth grade, so when she aged out of that the family moved to Coeur d’Alene so she could continue her education. Jill O’Hara said her mother had a summer job at a food stand catering to visitors to the scenic lake there, and the stand had a bear cub for the amusement of the tourists; her job included caring for the bear.

A life-changing moment came when her seventh-grade teacher put her in a school play.

“I played George Washington,” Ms. O’Hara said in the documentary. “Little boys weren’t too eager to be on the stage in those days.”

The experience kindled an interest in theater. She took theater classes at the University of Idaho and, while a student there, did an apprenticeship in New York. She wanted to stay, but, she said in an interview with the video project Active Aging Stories, she had been accepted at the University of California, Los Angeles, for junior year and figured she had better pursue that.

“On top of that,” she added, “I had my classmates in the car who needed a ride home.”

Her plans to return to New York were put on hold when she married John O’Hara and had three children; the family settled in Warren, Pa., in the 1950s. She and Mr. O’Hara divorced in 1962, but she stayed in Warren and started a children’s theater.

“I only did it because I was working as a children’s librarian and I noted they really could use help with their speech and diction,” she said.

That led her to found a summer theater in a barn. Productions by the company, the Plowright Players, included “Touch,” which generated enough buzz that theater producers came.

“One of them said: ‘I have a theater on East Fourth Street. I have grant money. If you bring your actors down, we’ll put it on together,’” she recalled in the documentary.

The show played at the Village Arena Theater. Mr. Poland signed on as the production’s general manager, and when the opportunity to rent the 13th Street space, a rather ancient building, came up, he accompanied Ms. O’Hara to look at the property.

“I was very concerned about the wiring,” he said in a phone interview. “There were wires hanging out everywhere. But she was not to be stopped.”

Mr. Poland worked on early shows there, including, in 1973, a collection of songs and skits, some of which he wrote, called “Hot and Cold Heros.” The title had an unintended effect.

“At lunchtime there were people lined up to get sandwiches,” Mr. Poland recalled. “We had to put up a sign that said, ‘Not a Delicatessen.’”

Mel Gussow, reviewing that production in The New York Times, concluded with a paragraph that seemed to sum up the career that lay ahead for Ms. O’Hara.

“This is a young, perhaps too energetic, cast of eight that sings well in unison, but is much less secure in solos,” he wrote. “But once again Mrs. O’Hara is to be encouraged for discovering new talent and nurturing it toward professionalism.”

In addition to her daughter Jill, an actress, Ms. O’Hara is survived by another daughter, Jenny O’Hara, also an actress; a son, Jack, a musician; three grandchildren; and a great-grandchild.

Ms. O’Hara not only lived in the building herself, but would also use its various spaces to give actors, writers and others a place to stay if they needed one. Some years ago she offered a crawl space to Tom Hanlan, who had been homeless. He became the theater’s resident set and costume designer.

“She took me in,” he told The Times in 2017. “I was about to sleep on a bench and I heard someone coming. I was going to run because I knew that sound. But it was Edith.”