This conversation includes spoilers for the first two episodes of “My Brilliant Friend.”

Can Ferrante Fever strike twice? HBO is hoping so, as it starts airing its much-anticipated “My Brilliant Friend” adaptation. In this first novel in Elena Ferrante’s Neapolitan series, we are introduced to the childhood friends Lenù (played by Elisa del Genio) and Lila (Ludovica Nasti) when they are in their 60s, and Elena is compelled to write the story of their lives.

Once a week, over the four weeks the series airs on HBO, we will gather a rotating group of Ferrante fans from across The New York Times newsroom to discuss the show. Here, Eleanor Stanford and Joshua Barone, editors on the Culture desk, and Valeriya Safronova, a reporter on the Styles desk, jump into the first two episodes. Major spoilers follow.

ELEANOR STANFORD Welcome to our little watching club! I first read “My Brilliant Friend” as part of a book club, so this feels very fitting. I was nervous when I heard HBO was adapting the series, partly because I have been burned by book adaptations in the past and partly because many HBO shows feel so aggressively masculine to me. How would such a network and a male director (Saverio Costanzo) interpret the books’ deep dive into feminine inferiority? But I was pleasantly surprised on that front: These first two episodes feel familiar in their tone, perhaps thanks to Elena Ferrante’s involvement in their development. As fans of the books, what hopes or fears did you both have going in?

JOSHUA BARONE There’s this tension: I often want a page-by-page adaptation of books I love, probably because I’m trying to find a way back to the feeling of reading them for first time. But I also want — and, in the end, am always more satisfied by — a completely new experience, something that retains the book’s spirit but presents it in ways that are satisfyingly unique to the adaptation’s medium, whether it’s TV, opera or anything.

Because the books are so much about a sense of place, I was hoping for that to be essential to the visual language of the series, as high of a priority as the relationship between Lenù and Lila. And, in many ways, Costanzo succeeded. The piazza the girls live on has the look of a stage set: grand, but static and ultimately stifling. (It is, after all, a studio soundstage.) They talk of never having seen the sea, yet they live just a short drive from it. Can you imagine living in a world so small?

STANFORD I grew up in a tiny village in England, so, sort of? But the Neapolitan neighborhood has an almost supernatural hold over people. In these first two episodes the girls are constantly testing the boundaries of their lives (or at least, Lila is and Lenù follows her). When they set off in the second episode to see the sea for the first time, it starts as this triumphant and rebellious adventure, where they can finally see a horizon stretching ahead.

But then, Lila turns back, and it’s the first time we see her scared of anything: She can handle being beaten by an older boy, being thrown out the window by her father, but leaving the familiarity of the neighborhood is too much for her. It’s a heartbreaking moment, one that really seems to foreshadow the rest of the story, as Lenù’s ambitions let her travel the world, and Lila can never rid herself of the neighborhood. 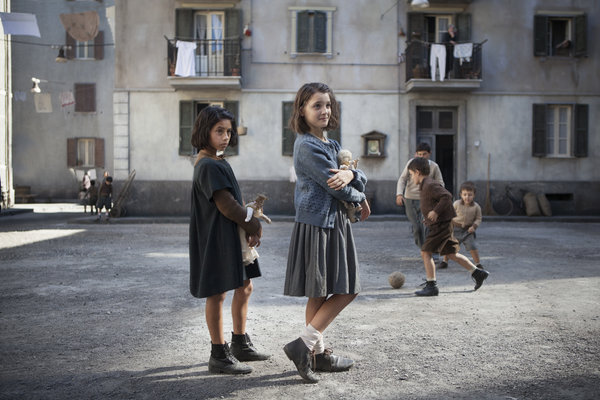 VALERIYA SAFRONOVA I thought the monochromatic tones of the neighborhood made the girls’ faces even more vivid and their movements more emphatic. I’m picturing the scene in which Lila throws rocks back at the group of boys, refusing to back down. When Lenù hands her the final rock, Lila twists into a miniature tornado of defiance, a moving, whirling force of nature against a static neutral background.

I also found that the city’s dull colors and straight lines underscored the violence that appears over and over in the two episodes, each aggressive act taking place on a new stage. What did you think of the violence? Did you find it too heavy-handed?

BARONE The violence did feel heavy-handed. I reread the portions of the book that correspond to these first episodes, and Ferrante mentions beatings, however severe, only in passing. In the first episode, the attack outside church against Signor Peluso is prolonged and graphic; on the page, it doesn’t take up more than a couple of haunting sentences.

STANFORD I think the graphic violence really worked. There was something almost ethereal about that scene where he’s thrown against the wall and the girls run out of the church to see. The swelling Max Richter score, the camerawork emphasizing how little the girls are, their desire to watch this really shocking violence, it all combined to create a moment that was even more powerful — dare I say it — than in the book. I do also think the explicitness might be a symptom of how the show has to set a precedent of normalized violence quite quickly.

SAFRONOVA What I found striking — and this is very true to the books too — is how flagrant the female anger is. You see Lenù’s mom berate her father for not knowing how to beat his daughter. You see the pleased expression on Imma Solara’s face as she stands outside her family’s bar after Don Achille is murdered. And, of course, you see Melina firing off expletives at Lidia, and later throwing her pots, pans and plants out her window while wailing.

BARONE Ah yes, firing off expletives into the piazza. It’s an Italian cliché, but for a reason: The story in my immigrant family is that my great-grandmother, who stayed behind in her tiny Italian town, lived well into her 100s but died only because she fell after yelling out her kitchen window. I appreciate how often Costanzo shows people doing this; you get the impression that the background noise of vocalizing matriarchs is as constant as bird song. It’s one of the many details, like the distinct use of local dialect and not more commonly spoken Italian, that make me optimistic for how the series will build out the worlds of Lenù and Lila as they get older.

STANFORD I couldn’t get over how striking-looking the two girls are. It seems like they were both cast, in part, for their staring ability: Ludovica Nasti (who plays Lila) has these eyes like glowing orbs and Elisa del Genio (Lenù) has such long eyelashes. There are lots of lingering glances as the girls try to figure out the world around them, and the actresses were so adept at conveying complicated emotions without a word, they rendered the narration a little redundant.

SAFRONOVA Ah, the narration. I definitely could have lived without it. Discussions of the books often focus on Lenù being an “unreliable narrator,” but I did not get a sense of that in the show. The only reminder we get that the entire story is being told from her memory is in the opening scene and in general, I found the narration distracting.

What did you think of the first two episodes? Join the discussion in the comments, and come back next week when we will be discussing Episodes 3 and 4. You can read The Times’ review of “My Brilliant Friend” here.