You’re boxing in a wheelchair, and you get into a vulnerable position that you want to get out of. Think about it. The only way to move away from the blows is to lower your hands to the wheels, leaving your head unprotected.

It’s a place you don’t want to be.

Donahue Fields, 36, got the idea to start a wheelchair boxing program after being beaten and robbed in a nursing home, where he was recovering from the amputation of both of his legs. Even more than his disability, the attack made him feel helpless and incomplete, “less than a man,” he said.

“I was in a dark place. I was done with life. I attempted suicide. I was afraid of people taking advantage of me in a chair.” 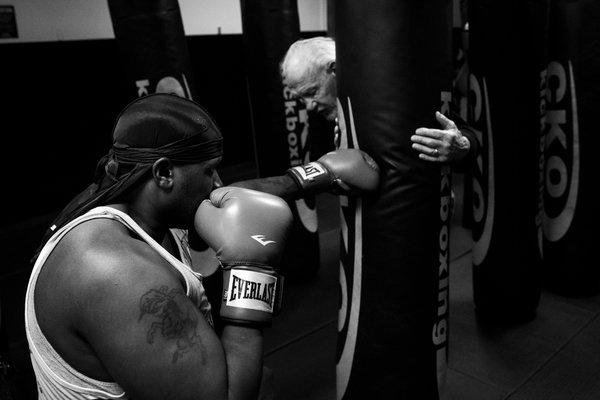 He had stood 6-foot-5 before a random .35-caliber bullet tore through his spine; now he rolled with his head at the level of a small child’s.

Nolan Ryan Trowe, 25, a photographer, is partly paralyzed from a cliff-diving accident, and when he met Mr. Fields through a mutual friend, he was fascinated. Nobody wants to be defined by a disability. But Mr. Fields tried to help others box their way out of their own feelings of helplessness or vulnerability, Mr. Trowe said.

None of them, Mr. Fields vowed, should have to go through what he had.

The boxers met most Saturdays at a kickboxing gym in Ozone Park, Queens. Mr. Trowe took his camera and his curiosity. He identified with what the boxers were experiencing.

So often since his injury, which has had him in and out of wheelchairs, strangers looked at him as needing their help. Some pushed his wheelchair across a street without asking him. Boxing sent a different message.

“Societal expectations of disabled people are that we need able-bodied people’s help to do things,” he said. “That’s simply not true.”

Though the fighters in these images are in wheelchairs, the photographs are not about disability, Mr. Trowe said. Instead, they are about a group of people striving to overcome obstacles and establish a new sport, one that might someday be part of the Paralympic Games. “It’s really an American story,” he said. “I want people to see that a person like Donahue — he’s been a victim of a lot of America’s structural violence, but he’s been able to come out of it.”

While visiting the boxers in training, Mr. Trowe was sometimes tempted to put on gloves, he said.

“I’m a competitive person, so there is that level of curiosity,” he said. “But if I’m boxing I don’t have my camera.”

And he did not want to miss anything.

John Leland, a Metro reporter, joined The Times in 2000. His most recent book is “Happiness Is a Choice You Make: Lessons From a Year Among the Oldest Old,” based on a Times series. @johnleland