In a bare room upstairs from his art studio inside an industrial building in the South Bronx, Derek Fordjour watched as three puppeteers brought a character drawn right out of his paintings to three-dimensional life. The artist was forging yet another branch of his multiform practice: a live show, inspired by Japanese puppet theater, to complement work in his upcoming gallery exhibition.

Mr. Fordjour often depicts Black athletes and performers — dancers, riders, rowers, drum-majors — as strivers who navigate the ambiguities that come with their achievement, and the racial scrutiny that accompanies visibility in the mainstream culture.

The wood puppet was a vessel for these concerns. He had an athletic look, in breeches and a tunic. The top was a striped number in pink, blue, and brown, typical of the busy colors and patterns that energize Mr. Fordjour’s paintings. The character careened between triumph and slapstick abjection as the puppeteers moved him across a long table with artificial turf.

The puppet bent to pick up a ball; it stuck to his hand. As he tried to shake it off, a laugh track played — a crowd guffawing at his distress. Later he soared for a dunk, Jordan-style. He was mocked and applauded — the story suggested that what elevates Black achievers in our society can also erode their psyches. 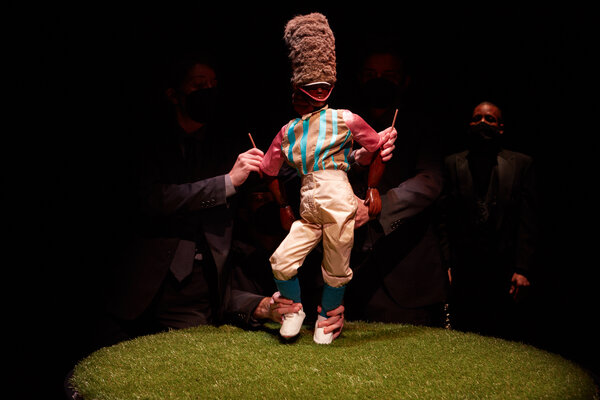 “I love learning other ways to have a conversation,” Mr. Fordjour said after the rehearsal, a collaboration with the puppet artist Nick Lehane. “Painting has its utility, but performance is another register.”

At 46, by art-world metrics, Mr. Fordjour is already registering. He was a market sensation in 2019 with a noteworthy sale at Phillips, where “Agency and Regulation (study)” went for $137,500, double its estimate. At the Frieze art fair he sold a suite of 10 paintings to Jay-Z and Beyoncé.

This year brought his first full-fledged museum show, at the Contemporary Art Museum St. Louis, where paintings hung in a tropical environment that included corrugated metal walls and an ingenious method to replicate the sound of rain. “The idea was about creating a multisensory experience,” Wassan al-Khudhairi, the show’s curator, said of the immersive staging. She added, “He’s an extremely ambitious person; risk-taking is part of the journey.”

Mr. Fordjour’s solo show, “Self Must Die,” at Petzel Gallery is typically elaborate, with a walk-in installation, two new painting suites, a series of sculptures and the puppet show, performed twice daily.

His rise has been remarkable considering that his breakout show, in an artist-run space in Bushwick, was in 2014. Two years later, he was still completing his M.F.A. at Hunter College.

The sculptor Nari Ward, his teacher and adviser at Hunter, recalled that Mr. Fordjour, who was older than most other students — was driven with big ideas. “He came in hungry,” Mr. Ward said. “I was like, ooh, what’s going to happen to this guy?”

Woven into Mr. Fordjour’s work are lessons from his tortuous journey since committing to art back in high school, the son of Ghanaian immigrants in Memphis, Tenn.

But it was the events of 2020, between the pandemic and the police killings of George Floyd and Breonna Taylor, that took his newest work on a bleaker path, one that digs deeper into the ceremony of Black grief and mourning. The focus of his art is shifting from the complexities of performative roles to include how we mark the lives that had been lost.

A new ensemble painting, “Chorus of Maternal Grief,” commemorates 14 women, from Mamie Till-Mobley, Emmett Till’s mother, to Tamika Palmer, Ms. Taylor’s mother, whom bereavement forced into public roles. It is a new move for him: specific portraits rather than archetypes.

“This year, I feel like memorial is important,” he said. “Black funerary tradition is on my mind,” he added. “Thinking about all the people who were not able to have funerals.”

The Petzel show arrives with an epigraph from “In the Wake: On Blackness and Being,” a 2016 book by the scholar Christina Sharpe, who refers to “wake work” — the ensemble of activities, grand and mundane, that acknowledge and address Black death, and in doing so, affirm Black life.

She writes: “What does it look like, entail and mean to attend to, care for, comfort, and defend, those already dead, those dying, and those living lives consigned to the possibility of always-imminent death, life lived in the presence of death … it means work.”

Mr. Fordjour was taken by that concept, he said, and he has also been reading Black liberation theory, by the theologian James H. Cone, and studies of Black mourning.

The artist recalled years ago criticisms of the funeral industry for inflating its prices. “And Black funeral directors really rebuffed it,” he said. “They said, this is the opportunity to celebrate. This is our chance to be ornate.”

One work in the show, “Pall Bearers,” is inspired by the lavish funeral given George Floyd in Houston. Struck by Mr. Floyd’s gold-finished casket, Mr. Fordjour researched recipients of similar gold coffins and found that they included Michael Jackson and Whitney Houston.

The painting presents men in top hats, in a flattened perspective that conveys rhythm and immediacy. “But the casket is probably the subject of the painting,” he said. “A man commemorated in a gold casket, contrasting so sharply with the way his life ended.”

Mr. Fordjour plays with the ornate; he is not afraid to dazzle.

“He’s a superb colorist,” said Manon Slome, the curator who developed with Mr. Fordjour a wild, funhouselike installation for kids (but not just) at the Sugar Hill Children’s Museum of Art & Storytelling. “There’s a theatricality in the work; they’re showmen,” she added. “The light radiates from within.”

When depicting crowds, as in “Parade,” Mr. Fordjour’s 2018 mosaic series inside the 145th Street subway station of the No. 3 line, the artist shows the inspiration of Jacob Lawrence and Archibald Motley, though his palette is lighter, more variegated.

The process of painting is at once humble and intricate: He covers a canvas or wood board with cardboard tiles, foil and other materials, and wraps it in newspaper (always The Financial Times, for its warm, salmon hue). The process repeats several times, with Mr. Fordjour applying washes of paint, then tearing and carving the accumulating surface as he goes.

These days, Mr. Fordjour has assistants handle the preliminaries, which involves seven or eight layers. “This is where I start cooking.” He applies hundreds of small pieces of hand-cut paper, and sketches in charcoal. Then he moves to acrylic and oil pastel.

“He found a technique,” said Mr. Ward, who remains his friend and sounding board. “It’s a kind of seduction of the hand, but once you’re in it, you realize you’ve been brought to another space — of inquiry and realization of a kind of historical angst.”

Mr. Fordjour’s first round in art school in New York, back some 20 years earlier, wasn’t such a success. Set on his path by Bill Hicks, a local-legend art teacher at Central High School in Memphis, he enrolled at Pratt Institute, but now says, “I went way off track.”

He dropped out and hung out — at the Met, at the Art Students League, and had a brush with the justice system in Brooklyn. “The truth is that I ran into some trouble. I got arrested,” he said. The charge involved drugs but the case was dismissed. The incident left him shaken and reminded him of his middle class privilege.

“The thing that saved me was that my dad was an oral surgeon, and I had a cousin at Harvard Law School. But I saw what happens when someone like me gets into that system.” Long ashamed, he revealed the story when he participated in Project Reset, where artists mentor young people facing misdemeanor convictions.

Mr. Fordjour returned to Memphis and enrolled in community college, then had a baby with a girlfriend (his son is now a college student). “Living some life kind of got me on track,” he said. He began teaching art in day care centers. He then finished college at Morehouse University, continuing to Harvard, where he earned a master’s in art education.

A different path was germinating, that of the artist. At Morehouse, Akua McDaniel’s course in African-American art history awakened him to a lineage from slavery to the Harlem Renaissance to the scholarship of David Driskell and Richard J. Powell. “It opened me up to a whole world of possibility,” he said.

And a series of portrait commissions for bankers and others in Memphis’s Black professional circles showed that there could be money in painting. By the time Mr. Fordjour reappeared in New York and got married, settling into suburban life in Mount Vernon, he was steadily producing portraits and landscapes in his basement.

He hated it. “It was a lot of bad work, failed experiments,” he said. Things he cared about did not show up in his work. When his marriage fell apart, he found himself sleeping on an air mattress in a storage building.

But he found it liberating to work with charcoal on newspaper — the only surface he could afford for a time. And he was making friends on the art scene like Hank Willis Thomas. Mickalene Thomas let him help in the studio; her work with fractured surfaces, bright color, and neon, he said, unlocked his own imagination.

By the time Mr. Fordjour enrolled at Hunter, his friends were alerting collectors. The construction executive Joseph Mizzi offered him an exhibition in his office in 2013. He accepted, recalling advice from Mark Bradford: “Show anywhere.” The painter Henry Taylor turned up and bought a sculpture.

“It just started happening, man,” Mr. Fordjour said. “I haven’t even put it together for myself.”

In the studio last month, collaboration was in the air. Art by friends hung in the conference room. On Zoom, Mr. Fordjour checked in with Hollywood designers, one a friend from high school, who were crafting his new installation. The puppet artists worked upstairs.

Mr. Fordjour contemplated how this year had elevated the stakes.

Last March, he was sued by a former gallerist, Robert Blumenthal, who claimed that Mr. Fordjour reneged on a deal they agreed to in 2014, to deliver 20 canvases. Mr. Fordjour’s lawyers call the pending case “meritless,” and have filed for its dismissal.

It was not lost on him that as his prominence grows, his own position resembles more and more the archetypal performers he has painted balancing between anguish and transcendence.

“To some degree maybe these are self-portraits,” he said, showing a painting of an argyle-clad man on a unicycle, holding balls in both hands, with another ball on his neck.

“I’m benefiting from a moment,” he said. “I hope that my work is good. I recognize that I’m an artist in society, and when society goes and moves in another direction I’ve still got to be rooted in what I’m doing.”

To keep steady, he said, meant living on shifting boundaries: between exposure and vulnerability, close-knit community and the broader social sphere. It was a challenge for his art, and for his life.