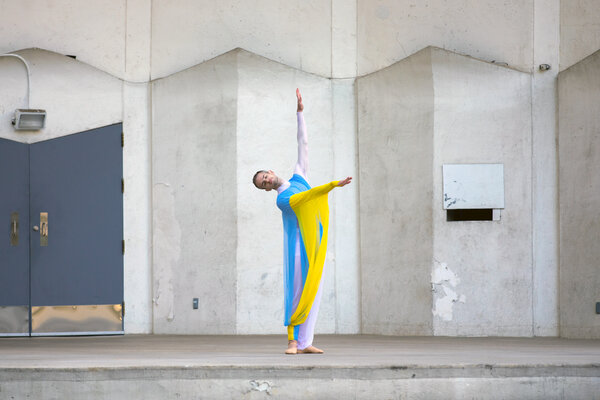 When it comes to digital site-specific work, there’s a thin line between a dance on film and a perfume ad. It’s dispiriting to say that in New York City Ballet’s New Works Festival we get plenty of eau de ballet.

That the company could present new work at all during a pandemic, as it did last week, with five short films that use the Lincoln Center campus as a set, is admirable. (Recently City Ballet called off its winter and spring seasons.) But there’s only so much whipping hair and water splashing, grassy knolls and dreamy overhead shots I can take.

The company did branch out of its usual bubble, commissioning choreography by Sidra Bell, Andrea Miller and Jamar Roberts, who were working with the dancers for the first time; as well as by Pam Tanowitz and Justin Peck, City Ballet’s resident choreographer and artistic adviser. 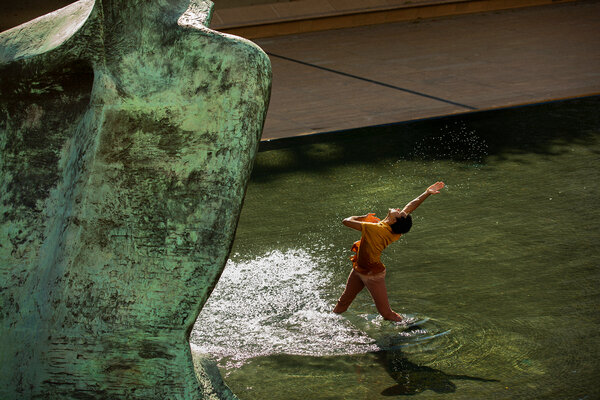 But what takes center stage more than the choreography is the filmmaking. Camerawork, both frantic and labored, gets in the way of dancing, creating a slickness — and a sameness — that turns stale fast. All but one of these short films was directed by Ezra Hurwitz (with cinematography by Jon Chema). Mr. Peck, with Jody Lee Lipes, as director of photography, took charge of his own.

Just as choreography needs a point of view, a site needs a purpose. One work, “Solo for Russell: Sites 1-5,” seems to have a reason for using Lincoln Center as its stage. Choreographed by Ms. Tanowitz with Russell Janzen — a rare instance of credit given to a dancer in the ballet world — the piece features the unflappable Mr. Janzen walking with purpose from one location to the next, sometimes with a roll of Marley flooring tucked under his arm, sometimes changing in and out of costumes (by Reid Bartelme and Harriet Jung).

In one iteration, strips of pale blue and yellow drape from Mr. Janzen’s collarbone to one leg. He is already statuesque, but as he stands on the stage of the Damrosch Park bandshell, the sculptural effect of the draping fabric and the towering structure transforms him into a monument from another time. (Is that what a dancer has become in the age of the coronavirus?)

Stoic and resolute, he has a last-man-on-earth quality. The clipped shots of movement — a slow promenade with a leg held forward in a pistol squat, a quick turn with a raised arm — are enhanced by Alfred Schnittke’s eerie music to convey a sense of resignation and alienation. Instead of showing us a complete dance, Ms. Tanowitz presents something more intriguing and, given our emotional mood, relatable: the shards of one.

Ms. Bell’s “pixelation in a wave (Within Wires),” set to an original score by her jazz musician father, Dennis Bell, features a cast — Ghaleb Kayali, Mira Nadon, Emily Kikta and Peter Walker — bouncing between landscape shots, which render them bite-size, and close-ups that tend toward the precious. Working with the dancers’ lines and shapes as they intersect with and are juxtaposed against the architecture of the site — at one point, a raised lawn above a concrete pathway — Ms. Bell’s chiseled shapes feel random with all the quick cuts; instead of the cool tension she seems to be going for, it’s hectic.

Ms. Miller’s “new song,” set to music by the Chilean singer Víctor Jara, has more flow as Harrison Coll, Indiana Woodward, Unity Phelan and Sebastian Villarini-Velez sail from the plaza to the wooded grove and into the water of the wading pool in the center of Hearst Plaza. Usually, Ms. Miller’s work seems linked to Ohad Naharin, the Israeli choreographer for whom she previously danced; this time, it is Pina Bausch. Hair. Long dresses. Got it.

The emotion of it, though, cracks something open in Ms. Phelan, who is unleashed in a way she hasn’t been before. But it’s all too earnest: As a group, the dancers walk into the water where, after the camera swoops overhead, they splash their chests with feeling.

The pool is a tempting location, and Mr. Roberts uses it, too, in his “Water Rite.” Most impressive here is the soloist, Victor Abreu, a member of the corps de ballet, who has always struck me as having a certain vulnerability: the look of a boy trapped in a man’s body. In “Rite,” set to jazz music by Ambrose Akinmusire, Mr. Abreu reveals a newfound maturity and power. And Mr. Roberts offers an arresting final image: The musicians, joining Mr. Abreu in the water, play the final note.

But in both this film and Ms. Miller’s, the use of the pool feels obvious and facile; I kept thinking of Eiko and Koma, the Japanese dance artists — and masters of site-specific work — who, in 2011, performed here, using the reflecting pool as a way, in part, to explore the sensation of surrender.

Mr. Peck succumbs to something else in “Thank You, New York”: sentimentality. The opening features images of the city alongside video portraits of the cast — Georgina Pazcoguin, Christopher Grant, Sara Mearns and Taylor Stanley — expressing their love for it in voice-overs. “New York, especially, now is a phoenix just waiting to rise from the ashes,” Ms. Pazcoguin says. “I know it. I can feel it. I can feel the embers, I can feel the energy.”

They do gas on, staring into the camera with lingering gazes or off into the distance. Woven throughout are images of the skyline, the Statue of Liberty, a street of outdoor diners. And then it gets worse. The music starts: a reworked version of the song “Thank You, New York” by Chris Thile.

In different locations, the dancers let loose: Mr. Stanley, at Riverside Park, sways this way and that while pausing to raise his eyes and arms to the treacly lyrics “Reaching up for stars that we’ll never see.” To the sound of “Mmmm,” he bends his knees and gives a little swivel.

Mr. Grant glides across the handball courts at Brooklyn Bridge Park with fervent footwork while Ms. Pazcoguin, atop the company’s theater at Lincoln Center, dashes to a corner of the roof and stares at the Metropolitan Opera: so near and yet so far.

In terms of their expansive, passionate dancing, the women definitely have an edge: Both Ms. Pazcoguin and Ms. Mearns, who is bathed in darkness while flittering across the pavement of a Chinatown street, never hold back. It’s true on film, too.

But this film is not a keeper for the pandemic time capsule. It is yet another sneaker ballet from Mr. Peck in the manner of Jerome Robbins, though without his subtle hand. Midway, it shifts into an unintentional comedy as the lyrics press on: “Thank you, New York, may I have another/Dance with you upon the winds of change.”

The music creates some earworm trauma. (And for whatever reason, I can’t get Taylor Swift’s “Welcome to New York” out of my head, either.) But while the sentiments behind Mr. Peck’s film are clear — we miss New York, and we miss dance — this love letter doesn’t deliver.