Clark Middleton, a versatile film and television actor who delivered striking performances in supporting roles and whose struggles with rheumatoid arthritis as a child gave him a cause to champion and grist for an autobiographical one-man Off Broadway play, died on Oct. 4 in Los Angeles. He was 63.

His wife, Elissa Middleton, said the cause of death was West Nile virus. She said he may have been bitten by an infected mosquito in their backyard.

Mr. Middleton, who was 5-foot-4 and had little movement in his neck, seldom played leading roles, but he was a scene stealer. He was often cast as peculiar, feisty and eccentric characters. In Bong Joon Ho’s postapocalyptic thriller, “Snowpiercer” (2013), he played the painter who quietly chronicles horrors that unfold on a rushing train. In Quentin Tarantino’s “Kill Bill: Volume 2” (2004), he helped bury Uma Thurman alive.

He was also a stalwart of the downtown New York theater scene, and he appeared on Broadway in 2018 alongside Denzel Washington as the anarchist Hugo Kalmar in Eugene O’Neill’s “The Iceman Cometh.”

Mr. Middleton’s best-known role was probably in the NBC crime drama “The Blacklist.” He played Glen Carter, the irritable Department of Motor Vehicles employee who becomes an unlikely informant to the show’s villainous protagonist, Raymond Reddington, played by James Spader.

“Raymond Reddington is a different character with Glen than with anyone else in that show, and that’s because Clark brought that,” Mr. Spader said in a phone interview. “Clark was not that character, but that character was all Clark.” 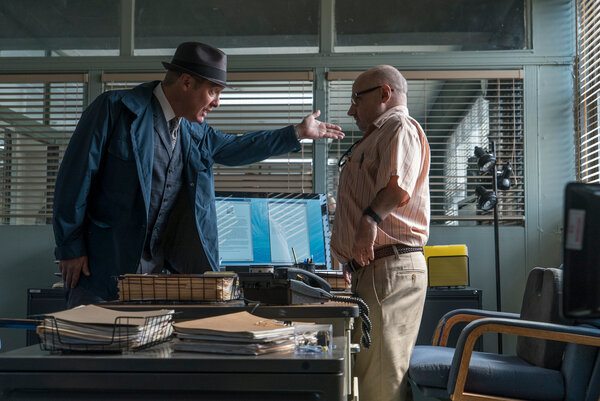 As a spokesman for the Arthritis Foundation, Mr. Middleton strove to convey the message that juvenile rheumatoid arthritis — a rare form of arthritis that causes joint inflammation in children younger than 16 and can interfere with growth and bone development — was not a limitation. But the condition, which ravaged his body when he was a boy, was undeniably part of his creative identity.

“By thinking of it as something that you’re fighting, you almost become a victim to it, and it has power over you,” he said of his disability in a video for the Arthritis Foundation. “So I suggest reframing it, and thinking about befriending it, and learning to dance with it.”

Clark Tinsley Middleton was born on April 13, 1957, in Bristol, Tenn., and grew up in Tucson, Ariz. His parents, Mel and Sue (Holbrook) Middleton, were public school teachers. Mr. Middleton attended the Palo Verde High Magnet School in Tucson and, briefly, the University of Arizona.

He learned he had juvenile rheumatoid arthritis when he was 4, and his family could do little but watch as the disease warped his body. He didn’t attend school for almost three years, taking classes at home.

“At first it distorted my hands,” he told The Gazette. “Then the cortisone I had to take made my cheeks fat. At 8, I lost movement in my neck. When I was 15, my hip snapped.”

Mr. Middleton endured agonizing flare-ups throughout his life. He underwent a dozen joint replacement surgeries and two back operations.

In his 20s, he headed to Southern California and found work at a car rental agency and in a Social Security office. He took an acting class on a lark and at one point performed a scene there from “A Hatful of Rain,” a play and later a 1957 movie about a morphine addict. The room fell silent.

“No one applauded or even spoke,” he said. “I figured I was terrible and started to cry. The teacher looked at me and said, ‘That was wonderful. You should be an actor.’”

Mr. Middleton headed to New York City to study acting. He got a dingy room at an S.R.O. in Hell’s Kitchen and started taking classes at the Herbert Berghof Studio. Soon he was immersed in the city’s independent theater scene.

Geraldine Page became his teacher and mentor. He performed at La MaMa and the Public Theater. He worked with playwrights like Sam Shepard, John Guare and John Belluso. And he found an affordable apartment on the Upper East Side, which he inhabited for over 30 years.

But the malady in his bones was never far away.

When he was 35, Mr. Middleton started experiencing excruciating pain. Doctors discovered that his hips had completely deteriorated and that he needed artificial ones. He had no insurance, but his doctors were able to arrange an operation. He recounted the episode in his one-man Off Broadway play, “Miracle Mile.”

Reviewing the production in The New York Times, Peter Marks wrote, “The actor is afflicted both by the tormenting legacy of his painful childhood disability, juvenile rheumatoid arthritis, and a contradictory urge that can be just as tenacious: the need to perform.”

Mr. Middleton’s film and television career bloomed in the 2000s, and he went on to play roles in the 2005 film “Sin City,” the science-fiction TV series “Fringe,” on Fox, and the recent “Twin Peaks” reboot on Showtime.

He married Elissa Meyers, who is also an actor, in 2006. He became involved with the Arthritis Foundation afterward.

“Some people get R.A., and they just want to curl up and don’t want to be seen or do anything,” Ms. Middleton said. “Clark was the antidote to that.”

In addition to his wife, he is survived by his mother, Sue Perior, and a brother, Kirby.

Mr. Middleton and his wife moved to Los Angeles two years ago. After the pandemic took hold on the West Coast in March, he didn’t leave the house, having already been living with a compromised immune system. But he remained active creatively, teaching virtual acting classes and reading Beckett and Shakespeare plays in his backyard.

One Saturday last month, Mr. Middleton woke up feeling sick and, by the afternoon, had developed a fever. Then his mental acuity started to fade. He died at Cedars-Sinai Medical Center two weeks later.

Mr. Middleton’s final live performance, in an intimate Zoom production of O’Neill’s one-act play “Hughie,” occurred in his bedroom in July. He played a weary Times Square hotel night clerk who must listen to the woeful ramblings of a gambler hanging out in his lobby.

The clerk’s role starts off quietly and simply enough. By the play’s end, Mr. Middleton had stolen the show.