I woke up with the sight of snow banked against my windowsill, so perfectly even and untouched that it was as if each flake had been placed by hand. Then the mug of hot oatmeal and the donning of the baggiest, fuzziest — and, thus, comfiest — lounge pants I own. What better way to prepare for a matinee performance of “A Christmas Carol”?

The ritual felt particularly apropos for the production I was readying to watch (my sixth “Carol” in 10 days, by the way): The Old Vic’s festive live broadcast, starring Andrew Lincoln and directed by Matthew Warchus. If you were in New York last (pre-Covid) holiday, you might have caught this same buzzy production at the Lyceum on Broadway, where Campbell Scott played the lead.

In his review last November, Ben Brantley praised the show for “retaining the jolliness and sentimentality” of earlier versions while also foregrounding the story’s social consciousness. This live-streamed production does the same, and despite some uneven pacing and distracting camerawork, this “Christmas Carol” provides all of the Christmas cheer you’ll need this season. 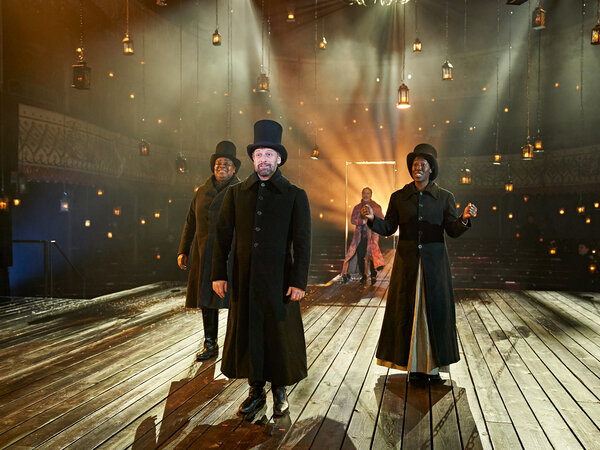 Jack Thorne, who did this nimble adaptation, puts more pep in Dickens’s step, speeding through certain parts of the narrative, expanding others and writing the most obstinate Scrooge I’ve ever encountered. This Ebenezer isn’t down to play any reindeer games. And did I mention the daddy issues?

Here we watch Scrooge’s father — an abusive alcoholic — beat his son and force him into the job market to cover his own debts. It’s like the DC Comics universe “Christmas Carol”— as dark and brooding as a sad, rich orphan who dresses up as a bat at night.

Don’t get me wrong: The changes contemporize the tale and varnish it with another layer of realism. Warchus’s purposeful direction sets a combative Scrooge and his kind clerk Bob Cratchit even more at odds. As the urchin-like Cratchit, John Dagleish seems to set himself a-quiver at every disturbance.

Lincoln, who spent years fighting zombies on “The Walking Dead” (and was the creepy guy with the poster boards in “Love Actually” — yes, actually), is remarkably charismatic even at his meanest. Still handsome with a wintry beard, his Scrooge is all eyebrows and mouth, furrowing into a suspicious glare or twitching into a sneer. It’s enough to make a Victorian girl swoon.

Speaking of which, Scrooge’s childhood love interest, Belle (a steadfast Gloria Obianyo), is given more than the usual personality, christened with a refreshing wit and keen sensitivity to economic inequality.

But neither headstrong Belle nor his earnest nephew Fred (Eugene McCoy) can rehabilitate Scrooge. In fact, even the ghosts have a tough go of it. Scrooge challenges the trio, criticizing their methods, dismissing their visions — even rushing them along, because he’s a very busy man with no time for second-rate hauntings. Warchus unfortunately seems to feel the same: It takes less than 15 minutes from the start for Marley’s ghost to appear onstage, just seconds after Bob’s exit.

The Old Vic doesn’t disappoint with its staging: Lanterns hang from the ceiling, hovering in the darkness like stars in a night sky, and snow falls as suddenly and quietly as it did in the Northeast this week. (Rob Howell designed the lovely sets and costumes.)

And yet the filming doesn't always do the production justice. This is the fourth, and most elaborate, Old Vic show performed and streamed live from an empty theater; the reliance on split screens and multiple cameras, here paired with manipulated shadows and video projections, can be confounding enough to make a caroler dizzy.

Mostly, though there’s plenty to be jolly about in “A Christmas Carol” right now; after all, isn’t it true that every time a miserly capitalist is awakened to a more politically progressive and generally humane way of living in the world an angel gets its wings?

And while Thorne’s script requires a few extra contortions to guide this cantankerous skinflint through his great transformation, it’s worth the wait to get to the finale.

Suddenly there’s snowfall and a jubilant chorus of “Joy to the World,” a cast performing on hand bells and a feast that literally comes down from the heavens (brussels sprouts by parachute and a giant turkey by zip line from the balcony). Yes it’s a lot, but it’s done with intention: a request for donations to a British food bank appears onscreen during the final minutes.

In another time I might have been more grinchy, might have felt this was all too much. But everything about this year has been too much — too many gravestones and too much Scrooge-worthy behavior. So let the veggies fly, and give us bells and snow and all the merry we can muster.

A Christmas Carol
Through Dec. 24; oldvictheatre.com