For nearly her whole career, Cira Robinson has — like many ballet dancers of color — performed a ritual: Painting her point shoes to match her skin.

She did it first in 2001, when she was 15, at a summer program with Dance Theater of Harlem. The company said her shoes needed to be brown, not the traditional pink, but she couldn’t find any in stores, so she used spray paint. “It made them crunchy and just … ew,” she said in a telephone interview.

When she joined Dance Theater a few years later, she started using makeup instead. “I’d go to the cheapest stores and get foundation,” she said, the kind “you’d never put on your face as it’d break you out. Like, $2.95 cheap.”

She’d go through five tubes a week, sponging it onto 12 to 15 pairs of shoes — a process known in ballet circles as pancaking. It took 45 minutes to an hour to do a pair, she said, because she wanted to make sure the foundation got into every crevice and covered every bit of ribbon.

Did she find these steps annoying? “I didn’t know any different,” Ms. Robinson, 32, said.

But now, Ms. Robinson — a senior artist at Ballet Black, a British dance company — is no longer obliged to do so. In October, Freed of London, which supplies her shoes, started selling two point shoes specifically for dancers of color: One brown, the other bronze.

Freed is not the first firm to make point shoes for dancers of color — the American company Gaynor Minden has been producing some more than a year — but the new shoes from Freed, a large supplier in the ballet world, highlight one of the stranger rituals that dancers of color have to perform. 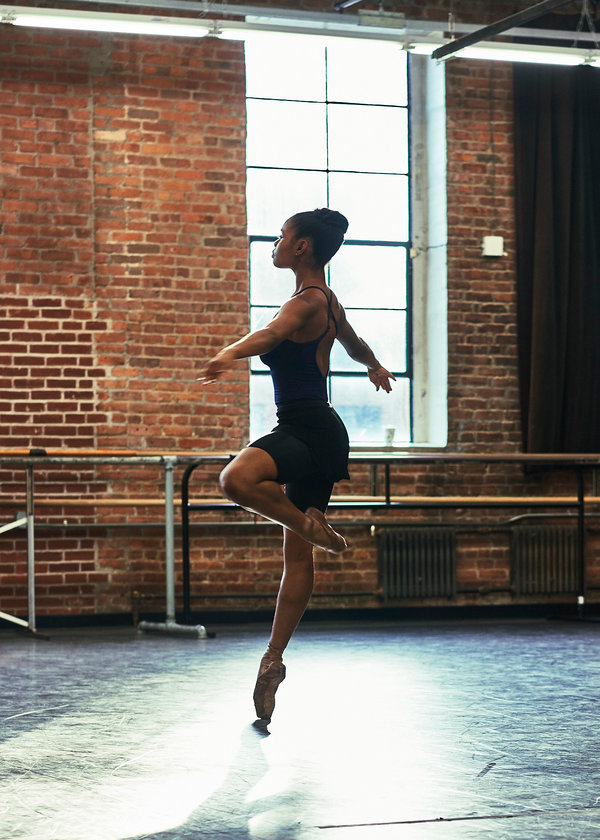 It’s also a reminder that black dancers — especially female ones — are still a rarity in ballet. They remain barely represented at the top of the field, despite some signs of change and an increased awareness of the need for diversity at the schools feeding professional companies.

Shoes aren’t the only costuming reminders of the lack of diversity in ballet. In September, Precious Adams, a first artist at English National Ballet raised the issue of pink tights. “In ballet people have very strong ideas about tradition,” she told London’s Evening Standard newspaper. “They think me wearing brown tights in a tutu is somehow ‘incorrect.’”

“But I want to look my best on stage. I’m not colorblind, and I think it ruins the line of my body.”

Dancers, though, cannot do whatever they like, Ms. Adams added. Directors decide on outfits. And often uniformity is a goal.

Dancers in the corps, particularly, have to blend in with the group. Ms. Robinson of Ballet Black said dancers of color can’t always wear flesh-colored shoes or tights, if it would make them stand out.

She said she had seen a soloist at the English National Ballet wear brown tights and shoes, when everyone else was in pink — “but she was a soloist.” (It works differently at Dance Theater of Harlem and Ballet Black, which are predominantly made up of people of color.)

“We want to shake up tradition a bit,” Ms. Robinson said, “but some things you can’t.”

Still, the new shoes have been welcomed. “This isn’t about shoes, this is about who belongs in ballet and who doesn’t,” said Virginia Johnson, the artistic director of the Dance Theater of Harlem, in a phone interview. “It’s a signal that the world is open to you.”

Point shoes were invented around 1820, said Anna Meadmore, a dance historian and curator of the Royal Ballet School collections. They contain a rigid “block” made of glue and fabric at the front that allows the female dancer to dance on point — on the tips of her toes.

The shoes were originally white to help dancers appear ghostly — the romantic ideal in the early 1800s was for women to be ethereal — but pink came to dominate as a way to approximate European dancers’ flesh. Shoes should blend in with the leg, Ms. Meadmore said, and not “break the line.”

Point shoes are made individually for dancers by specialist makers, and dancers always have favorite suppliers. Most dancers spend time customizing their shoes, whatever their skin color. Some who like them soft will bash them against walls repeatedly, or crush them. Others will add glue to keep them stiff. They also have to sew ribbons into every shoe so they can be tied to the foot, and sometimes add elastic for extra hold.

But the painting rituals are a step beyond. (Male dancers don’t traditionally wear point shoes, but they too have to paint their shoes if they want them to match skin tone.)

Ms. Johnson said she wore pink shoes when she started dancing in the 1950s and thought nothing of it until the ’70s when Arthur Mitchell, a founder of Dance Theater of Harlem, decided his dancers should wear shoes and tights to match their skin. Ms. Johnson then started using makeup to paint her shoes.

“It was quite wonderful to be onstage and just to be myself, 100 percent the color I was,” she said, “one line, one shape, a color that has integrity.”

She recalled that Capezio supplied brown shoes for Dance Theater for a short time, and at one point later the company’s dancers dyed their shoes with a product meant for bridal pumps. “Evangeline Shoe Dye,” Ms. Johnson said. “I haven’t thought about that name in years.” But since 2012, most members paint their shoes with acrylic paint, Ms. Johnson said. Dance Theater’s wardrobe master mixes paint to match each dancer’s skin tone.

Some dancers in the company still use makeup. Ingrid Silva has posted videos on YouTube showing how she pancakes her shoes to aid young dancers.

“A lot of people complain: It’s a long process, and it’s expensive,” Ms. Silva said. “The brand I use — Black Opal’s ebony brown — is $11 a bottle, and with that I can do three shoes.” She goes through an average of two pairs of shoes a week, meaning she used to spend $770 a year on makeup for shoes, a significant sum given dancers’ low pay. (Black Opal recently started supplying her free of charge.)

Ms. Silva, who is from Brazil, said the new shoes for dancers of color were a positive development, but more tones were needed. She can’t use the Freed shoes because they are not her color or style, she said. This echoes calls in the beauty world for wider ranges of foundation to reflect skin tones. (Last year, Rihanna introduced Fenty Beauty, a makeup line that offers 40 foundation colors, to meet that demand).

Shoes are also just one issue, Ms. Silva said. “There’s so much more the dance world has to learn,” she added, “starting from companies hiring more dancers of color.”

Olivia Boisson, a corps dancer at New York City Ballet, agreed that shoes are a small issue. She normally wears pink ones, she said, and is too focused on her dancing to worry about whether they affect how she looks onstage.

But, Ms. Boisson said, ballet is in a period of “checking itself,” especially following #MeToo revelations. (Peter Martins left City Ballet in January after allegations of physical and sexual abuse.) In such a moment, diversity issues are being discussed far more openly than even a year ago.

“We’ve talked about, ‘Are you feeling uncomfortable in these pink tights and pink shoes?’ Before we didn’t talk about things like that at all,” she said.

Freed could not estimate how many of its new shoes it expects to sell. “We have to be realistic,” said Sophie Simpson, its ballet company sales manager. “If you look at most companies, the number of black or mixed-race dancers is small. We hope that’ll change.”

Ms. Robinson of Ballet Black was involved in the shoes’ development, testing them for wear and their shades. “This is the first time in my career I haven’t had to do something to my shoes,” she said.

“I can just put them on and dance. I know that many people will be like, ‘O.K., it’s just a shoe.’ But a ballet dancer loves their shoes like a basketball player loves their basketball. They’re mine. They’re a piece of me.”

Alex Marshall is a European culture reporter, based in London. @alexmarshall81