Charity Danso had confronted malaria before, but this time was different. The problem wasn’t the disease; it was the cure.

It was the spring of 2007 in Kumasi, her native city in southern Ghana. To fight the malaria, doctors there administered a new drug.

The medication caused an allergic reaction. Bruises and sores bloomed on her body, and her fingernails fell out. She contracted a devastating illness called Stevens-Johnson syndrome and fell into a coma for two months.

The most traumatic — and permanent — symptom was impaired vision.

“I realized I couldn’t see properly,” Ms. Danso, now 47, recalled recently in her Chelsea apartment. “I couldn’t figure out faces, unless I knew someone.” 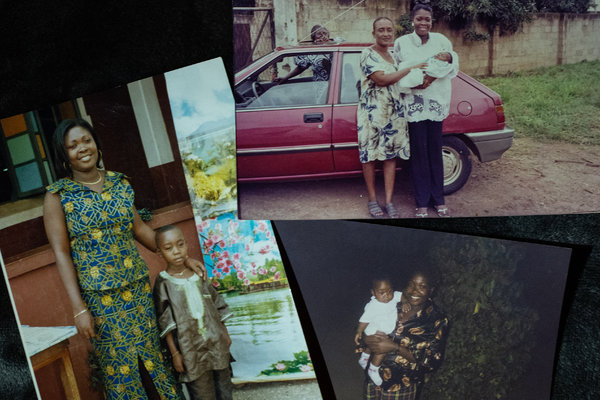 After the sudden illness, Ms. Danso’s vision continued to deteriorate. Her relatives pooled their resources to help her seek medical treatment in the United States. She left her 6-year-old son behind and packed to travel to New York, where she underwent a series of surgeries, including a corneal transplant.

“The next day, I started seeing something for the first time in eight months,” she said. “I could see colors.”

The improvement in her vision proved short-lived. A serious infection, followed by a number of unsuccessful procedures, left her blind, forcing her to accept a life in which every task is exponentially more difficult.

Eventually she moved to Chicago to live with a friend. There, she fell in love with a factory worker, and they married. But their home was far from the Lighthouse Guild, a nonprofit organization that assists people who are visually impaired, and the marriage soured.

Ms. Danso returned to New York, determined to further her education — she had dropped out of college in Ghana — and to reunite with her teenage son, Kofi, whom she had visited only twice since she left Africa.

Catholic Charities Archdiocese of New York has helped Ms. Danso with both goals. After preparing for her high school equivalency degree with the Lighthouse Guild, she went to the Catholic Guild for the Blind, which administers the state exam to visually impaired students. In January, she passed the test.

Since June, Ms. Danso has taken college preparatory classes with the Catholic Guild to prepare for placement exams at Borough of Manhattan Community College. The goal is to improve her math and language skills so that she can avoid taking remedial classes once she is enrolled.

“Hopefully by September of next year, I will be in college,” said Ms. Danso, who is now an American citizen, in her seventh-floor studio apartment in the Selis Manor for the Blind.

Bringing her son to New York proved more difficult. After months of paperwork and a year of waiting, Kofi, 17, arrived in the city in August. Now a student at the Liberty High School Academy for Newcomers, he longs to become a mechanical engineer.

During their long separation, Kofi lived with his grandmother in Ghana, but he spoke to his mother daily. “She fought for me,” he said. “I really wanted to be with her.”

Ms. Danso casts an affectionate gaze toward her son. “That was good, but it’s not the same as seeing someone face to face,” she said, referring to their frequent phone calls. “He’s been isolated for a long time. It’s high time for him to join me, to feel a motherly love.”

The two are on a waiting list for a one-bedroom apartment at Selis Manor. In the meantime, mother and son make do in the studio apartment, paying $215 monthly, and relying on $750 a month in Supplemental Security Income and $190 a month from the Supplemental Nutrition Assistance Program. When Catholic Charities learned that Kofi was sleeping on a mat on the floor, the agency used $323 in New York Times Neediest Cases funds to buy him a proper bed.

Catholic Charities has also helped Ms. Danso adapt to her apartment, which she moved into this fall. It is the first time since losing her vision that Ms. Danso has lived without an adult relative or friend.

Staff members placed 3-D dots on the microwave and taught her how to use adaptive kitchen tools, like a device that beeps when liquid reaches the top of a container. The Catholic Guild for the Blind also provided Ms. Danso with a watch that speaks the time, a crucial tool for her.

Since Kofi arrived, Ms. Danso has relished the chance to cook meals that they had enjoyed together in Ghana, like fried red plantains, bean stew and fufu, a West African mainstay made from cassava or other starchy staples. “I manage to work around it,” said Ms. Danso, referring to her vision loss. “I love cooking.”

In Ghana, Ms. Danso worked for a utility company as a customer service representative. As she has assembled the pieces of her life in New York, she finds herself yearning for a new career. She would like to become a social worker to assist others with vision loss.

“For somebody like me, who was seeing for 36 years and then all of a sudden, you lose your sight, you may think that your world has come to an end,” she said. “But you still have life and if you have life, you have everything. I’m happy because I’ve been able to come out with something good. And I’m pressing forward to reach higher.”