Chloé Lopes Gomes had done her hair and makeup and fixed the feathered swan headdress in place before the rehearsal in February. Then, she later recounted, she repeatedly dipped a wet sponge into a pot of white pancake makeup, applying it carefully to her face, neck and upper body.

Ms. Lopes Gomes, who is French, is the only Black female dancer at the Staatsballett Berlin, and just a few days earlier, she said in an interview, one of the company’s ballet mistresses had told her to use the white makeup to color her skin for “Swan Lake.”

“I felt humiliated,” Ms. Lopes Gomes said in an interview. “But what could I say?

Until fairly recently, it has been common practice in ballet companies for the female dancers in ballets like “Swan Lake,” “Giselle” and “La Bayadère” to apply a whitening makeup in order to look like beings from another world, be they swans, sylphides, spirits or Shades. Since most ballet companies — until relatively recently — included few Black dancers in their ranks, little thought was given to this; it was simply part of the creation of a uniform aesthetic effect.

But as companies have become both more diverse and more sensitive to racial issues, most have stopped the practice, or left it up to individual dancers. The Dutch National Ballet, American Ballet Theater and the Royal Ballet dispensed with the practice more than a decade ago.

But Ms. Lopes Gomes, 29, said that when she joined the Staatsballett Berlin in 2018, she was told by the ballet mistress in charge of the female corps de ballet to use the body makeup. “I said to her, I’ll never look white,” Ms. Lopes Gomes recounted. “She said, well, you will have to put on more than the other girls.” 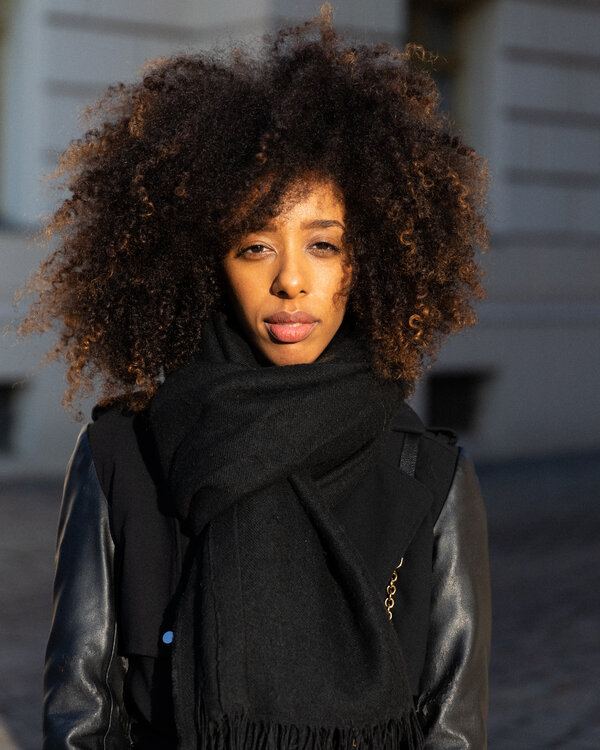 Ms. Lopes Gomes reported the incident to Johannes Ohman, at that time the co-artistic director, who issued a strict directive that she was not to use the makeup. But after he left the company in January, Ms. Lopes Gomes said she was told to use it again.

This is one of many racially insensitive incidents that Ms. Lopes Gomes said she experienced during her two years at the Staatsballett Berlin. She said she had been too afraid of losing her job to speak out earlier, but has decided to now after being told in September that she was one of 12 dancers whose contracts are not being renewed at the end of this season.

“I really hesitated about this because the ballet world is so small, and I’m scared I will never get another job,” said Ms. Lopes Gomes. “But I want things to change; there are so few Black ballet dancers, and I don’t want small Black girls to think, ballet isn’t for me.”

Christiane Theobald, the ballet’s artistic director, said in an interview that while she believes Ms. Lopes Gomes, she has been unable to corroborate her account. (Ms. Lopes Gomes said that Ms. Theobald, the deputy artistic director at the time, saw her wearing the whitening makeup after the February rehearsal and asked her why she was using it; Ms. Theobald said she has no memory of this encounter.)

But several people affiliated with the company confirm they either saw Ms. Lopes Gomes with the makeup applied, or that she told them at the time about the ballet mistress’s directive. All asked to remain anonymous, saying they were afraid they would lose their jobs if they commented publicly.

The practice of female dancers powdering or painting their bodies to look whiter probably dates from the mid-19th century, when romantic ballets like “Giselle” or “La Sylphide” popularized ethereal creatures who were variously ghosts, spirits or enchanted beings — like women who were turned into swans.

Behind the idea is another one that has long been fundamental to classical dance; the idea of aesthetic and stylistic uniformity. The female ensemble in many ballets is a multiplied image of the ballerina — the Swan Princess and the swans, Giselle and the Wilis — and the idea of conformity to a specific physical ideal is ingrained in the art form.

Female ballet dancers, in particular, are subject to strict physical requirements regarding height and weight. Individuality is subjugated in a corps de ballet; its very name, “the body of the ballet,” suggests the way in which classical dance often presents dancers as a massed presence in which no single person stands out in the group.

For those who believe in this historical ideal, the act of applying whitening body makeup is simply part of an overall aesthetic and theatrical effect, as much part of the costume as the tutu.

Benjamin Millepied, who stopped the practice of using either whitening paint or blackface during his tenure as director of the Paris Opera Ballet, said that defenders of these traditions always said that the dancer was simply playing a character. But it was not a valid argument in a context in which one race had oppressed another, he said.

“This armylike idea of everyone in unison, everyone looking identical, is a major problem with ballet,” he said. “It is an incorrect view; what makes the scenes work in ‘Swan Lake’ or ‘La Bayadère’ is great dancing, a sum of everyone’s energy and individuality, not a display of pancaked white people.”

The Paris Opera is waiting for the results of an external inquiry into racial diversity, commissioned by its new director, Alexander Neef, before setting a firm policy. But Aurélie Dupont, the current director of the Paris Opera Ballet, has told dancers not to use whitening makeup in the company’s upcoming production of “La Bayadère.”

Both Ted Brandsen, the director of Dutch National, and Kevin O’Hare, the director of the Royal Ballet, said they felt it was more important for their dancers to feel accepted than to adhere to a traditional idea of uniformity. “It’s really important to recognize that we’re in the 21st century,” Mr. Brandsen said, “and that ballet is an art form performed and enjoyed by people from many cultural backgrounds.”

It is still difficult to be a Black ballerina, said several dancers of color who were interviewed for this article. Most said they often felt they had to work harder than their white peers to prove their capabilities, or to change stereotyped ideas about what they could dance. But none had been asked to use body makeup, and each dancer praised her company’s current efforts to be more conscious of the issues around diversity and inclusiveness. (Several dancers mentioned that their companies now encouraged them to use tights and pointe shoes that matched their skin tones, rather than the standard pink.)

Ms. Lopes Gomes said that, in her case, from the moment she joined the company, she was picked on in rehearsals by one of the company’s ballet mistresses. “She would say, when you’re not in line or not on the music, we see only you because you’re Black,” she said. “It was upsetting.”

Several of Ms. Lopes Gomes’s colleagues said they had heard similar remarks directed at her. Mr. Ohman, the former co-artistic director, confirmed that Ms. Lopes Gomes had approached him in 2018 to report that a ballet mistress had told her to apply white makeup before performing. The choreographer Alexei Ratmansky, who staged his version of “La Bayadère” for the Staatsballett in 2018, said that he had not witnessed any discriminatory behavior.

The company said the ballet mistress had declined a request for an interview.

Ms. Lopes Gomes said that she believes her dismissal to be racially motivated. Ms. Theobald, who expressed her dismay and regret at Ms. Lopes Gomes’s account during an interview, denied this, saying the contracts of the 12 dancers had not been renewed for “artistic reasons.”

But Ms. Theobald said that, on the basis of Ms. Lopes Gomes’s account, the ballet mistress had been subject to “disciplinary measures.” For legal reasons, she said, she was unable to specify what these are.

On Monday, the company issued a statement on its website that did not refer explicitly to Ms. Lopes Gomes’s assertions, but stated that “the racist and discriminatory behavior that was brought to light in our company deeply moves us and shows that the necessary skills and tools to deal with issues of discrimination need to be worked on thoroughly to instigate profound change.”

Ms. Lopes Gomes said that despite the unpleasantness of some of her experiences in Berlin, she still hoped to find a job with a big classical ballet company.

“This has been my dream since I saw ‘Swan Lake’ when I was 8 years old,” she said. “At that time, everyone onstage was white. I would like to think it doesn’t have to be like that any more.”