The roving international art exhibition is carrying on despite the pandemic. This edition, in Marseille, could be a model for biennials in a changed world. 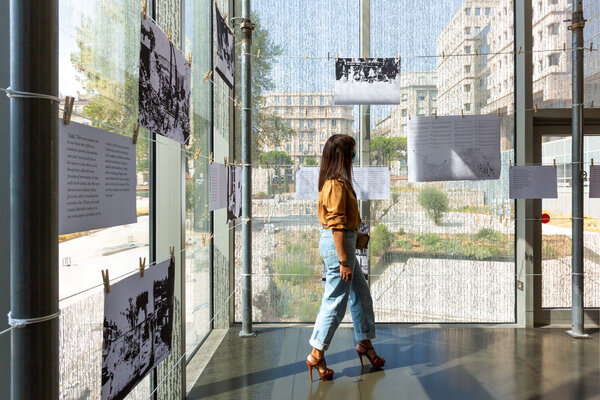 MARSEILLE, France — On the morning of Nov. 5, 2018, two residential buildings collapsed on the Rue d’Aubagne here, killing eight people and leaving a large gash in the city’s heart. Hundreds of others living in run-down Marseille homes at risk of crumbling were evacuated. Nearly two years later, the pain remains acute: The site where the two buildings stood remains a giant cavity, surrounded by barbed wire, and a nearby billboard commemorates the eight victims.

That building collapse is one focus of an exhibition at Manifesta, the roving international biennial, which has gone ahead with its Marseille edition this year, even as the pandemic has forced the cancellation of other major art-world events.

The no-frills documentary presentation about Marseille’s housing crisis, curated by Samia Henni, features photocopied photographs and sheets of text hanging from clothes pins. Speakers play recorded testimonies from campaigners, social workers, a bus driver and a policeman, who discuss Marseille’s shantytowns, slums and displaced populations, such as the hundreds still waiting to be rehoused after the 2018 collapse.

“When we went into lockdown, I thought, ‘What’s the point of taking part in this exhibition, when people are dying, suffering, and losing their jobs?’” said Ms. Henni, an assistant professor of architecture at Cornell University.

“I decided that if I participated, it would have to be together with the inhabitants of Marseille, and focusing on the suffering in the city,” said the academic, who, like an estimated 300,000 people living in Marseille, is of Algerian descent. 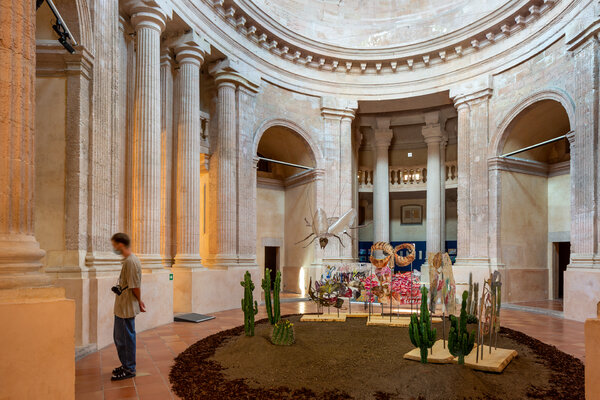 This year’s edition of Manifesta is tackling the tough realities of its host metropolis. The main exhibition is divided into six parts — “The Home,” “The Refuge,” “The Almshouse,” “The Port,” “The Park” and “The School” — all held in Marseille landmarks, and each addressing urgent social issues through modern and contemporary works. The six parts are opening weekly, in a staggered fashion until Oct. 9. Then the exhibition will be on view in its entirety through Nov. 29.

Yet because of a flare-up of the pandemic in France, and Marseille’s status as a “red zone” where masks are compulsory (even outside), international attendance has been very low so far. More than 100 groups of museum trustees, art professionals and patrons have canceled tours to Manifesta, international media coverage has been sparse and many live events to accompany the exhibition have been called off.

Manifesta’s 13th edition comes at a turning point in the international art world. With the pandemic causing so many deaths and wiping out so many livelihoods, global travel severely curtailed, and climate change threatening the planet, many are raising a question that has been percolating for a while: What is the point of biennials in the first place?

“Maybe this is a moment we should critically look at ourselves,” said Hedwig Fijen, the Dutch art historian who founded Manifesta 24 years ago, and who raised 6.2 million euros, about $7.3 million, for the Marseille edition. “Maybe we all need to think about the long-lasting potentiality of flying to 10 art fairs and 10 biennials every year, and whether this is relevant and urgent.”

She said other biennials were also questioning the model of an exhibition-oriented, marketing-driven event, and “looking for alternative relevance,” not just “having tourists attracted to a city and spending a lot of money there.”

For the six sections of this year’s main exhibition, Manifesta’s curators have kept the shipping of artworks to a minimum, and dug into Marseille’s collections. The shows combine historical archives, photographs and drawings related to famous onetime residents of the city — like the poet Arthur Rimbaud, the playwright Jean Genet and the philosopher Walter Benjamin — with contemporary artworks reflecting on slavery, racial discrimination and revolution, such as Hannah Black’s installation “Bastille,” a wall of bricks stuffed with pages from the Marquis de Sade’s “The 120 Days of Sodom.”

“I do think a biennial such as Manifesta has a role, particularly in times like these, to be very sensitive to the local context,” said Stefan Kalmár, one of the exhibition’s three curators and the director of London’s Institute of Contemporary Arts. Rather than parachuting in intellectuals from outside, it was important to “amplify existing voices,” he added.

Once described by the sociologist Michel Peraldi as “a sort of French Detroit,” Marseille is a sharply divided city. While millions have been spent to redevelop and gentrify it with shopping malls and state-of-the-art museums, it remains one of Europe’s poorest cities, and many of its working-class inhabitants, who are mostly of North African descent, live in tough conditions. The area around Rue d’Aubagne — a short walk from the city’s main drag — has the feel of downtown Algiers or Rabat, with its street stalls selling yams and mangoes, bustling barbershops and old men congregating on porches.

Members of these communities are disconnected from the kind of highbrow displays that are the mainstay of biennials such as Manifesta. So the Manifesta organizers have set up a temporary community and learning center in Belsunce, an economically deprived neighborhood, with rotating exhibitions and programs focusing on topics they hope locals will relate to — such as a 1990s rap group known as B.Vice (founders of France’s first hip-hop school), a century-old hiking association and a group that has worked to redevelop a dilapidated square.

“There’s a real need, a real demand for something like this, and people come in to say: ‘Thank you for existing,’” said Maéva Ngabou, the center’s manager. “Even though Manifesta may be hard to understand, and its program may be a bit complicated, it’s great to have this kind of place open.”

Curators and organizers say they want to meet local needs and make Manifesta relevant to its host communities. And, in interviews, they all agreed that the biennial concept is ripe for a rethink.

“Everybody needs to reassess the format,” said Mr. Kalmár. “I think we all need to slow down.” Mr. Kalmár said the virus was “a byproduct of an overheated economy,” and conveyed the message that “we need to also be more sustainable in our own physical and intellectual resources.”

“The depth is what we are missing,” he added.

Manifesta
Through Nov. 29 at various venues around Marseille, France; manifesta13.org.