PARIS — Milan’s not the only city with a La Scala. This fall, a long-lost theater of the same name reopened its doors here in Paris, and high-profile collaborations are already putting it on the map. This month, La Scala Paris welcomed a production of “Dans la luge d’Arthur Schopenhauer” (“On Arthur Schopenhauer’s Sledge”), by — and starring — the popular French author Yasmina Reza.

This chamber work with just four characters was a fine choice for the intimate, 550-seat venue. Painted in shades of dark blue, the modern auditorium was designed by Richard Peduzzi and offers flexible seating configurations. In the case of Ms. Reza’s exploration of one man’s depression, composed mainly of monologues, the thrust stage allows the audience to be close to each actor.

For La Scala Paris, this new act is just the latest development in a history full of twists and turns. It was designed as a smaller replica of Milan’s grand opera house by the widow of a 19th-century industrial tycoon, who had fallen in love with the original. La Scala Paris never presented opera, however. It started life in 1873 as a luxurious “café-concert,” or cabaret, famous for its glass ceiling. In the 20th century, it became a high-end movie theater and then a pornographic multiplex before being bought in 1999 by Brazil’s Universal Church of the Kingdom of God. 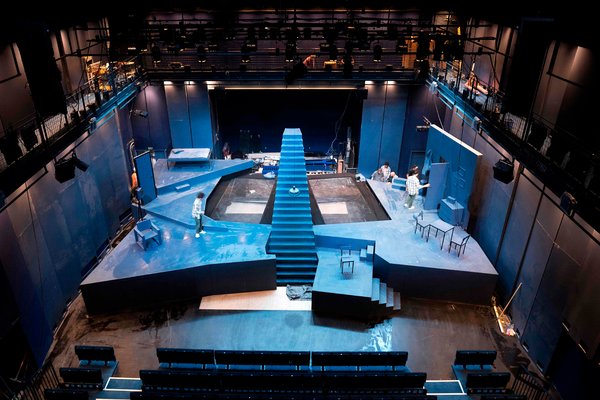 The venue was rediscovered and restored by a couple, Mélanie and Frédéric Biessy. Ms. Biessy is the head of an investment fund and provided financial backing for the operation, while Mr. Biessy has three decades’ experience as a theater producer. The theater’s model is unusual in France: While La Scala Paris is run privately, without state funding, the programming tries to bridge the gap between the country’s public institutions, which lean toward highbrow fare, and privately funded theater, considered less sophisticated. Crossover between the two remains limited, as artists mostly build their careers in one or the other.

La Scala Paris has found a natural partner in Ms. Reza, a playwright who has also straddled that divide, and “On Arthur Schopenhauer’s Sledge” is a creditable start. Frédéric Bélier-Garcia’s production, created in 2006 and reworked this season, doesn’t make much of an unusual stage layout, with stairs leading down to the audience on three sides. It relies on the four actors to carry the scenes but doesn’t always provide them with the most natural stage directions.

Ms. Reza’s wise, occasionally ferocious text is the real star. She has a gift for introducing details that bring out a character’s quirks and perspective, and she put it to good use in the monologues, which are generally addressed to another, silent character. Ms. Reza plays Nadine Chipman, who sets the scene by describing how the hand of her partner, Ariel, who has fallen into a depression, hangs listlessly over the armrest of his favorite chair all day. “My husband has no radicalism,” she sighs, the line at once odd-sounding and arresting in French.

The play’s title is inspired by Ariel’s journey. A specialist in the 17th-century Dutch thinker Baruch Spinoza, who saw happiness as one of the goals of philosophy, he instead turns to the pessimist Arthur Schopenhauer, the German philosopher of 200 years later, as his mental health suffers. André Marcon lends the role a gruff despondency, which perfectly contrasts with Jérôme Deschamps’s spot-on comic turn as the oblivious Serge Othon Weil, a friend of the couple, who preaches optimism by way of well-meaning platitudes.

The fourth member of this bourgeois quartet is a psychiatrist (Christèle Tual), who has little to do besides listening to the others. Her only speech, about becoming obsessed with an old lady who blocks her path in the street, is well constructed but feels somewhat detached from the rest.

Ms. Reza herself has uneven moments as Nadine, but she adroitly brings out the character’s exasperation and her shallow side as she considers cheating on her husband. We see the worst of her and Ariel, which makes the ending somehow more poignant. When he asks for simple kindness, and she hesitates before lying down against him onstage, their possible reconciliation rings true.

As one theater opens in Paris, however, another is being threatened with closure. Le Tarmac, located in the northeast of the city, has been locked in a battle with France’s culture ministry since last January, when the minister at the time, Françoise Nyssen, announced that the venue would be repurposed.

The plan was to hand it over to Théâtre Ouvert, a center supporting new writing, which will find itself without a stage in 2019 after its current lease ends. The irony is that the missions of the two rival artistic teams are mostly aligned. Le Tarmac, which settled at its current address in 2011, also focuses on emerging artists, specifically French-speaking ones from around the world.

The ministry’s highhanded treatment of Le Tarmac’s current residents prompted an outcry. A petition against the plan gathered over 15,000 signatures. Ms. Nyssen retreated, instead publishing an open call for projects for the venue last July. No results have been announced yet, and the departure of Ms. Nyssen last month as part of a larger cabinet reshuffle means it will now fall to her successor, Franck Riester, to solve the problem of what to do with Le Tarmac.

In the meantime, the theater has pressed ahead with its current season, and this month it presented a new play by one of its resident artists, the Guinea-born playwright Hakim Bah. Mr. Bah, 31, already has a solid body of work, and “Fais que les étoiles me considèrent davantage” (“Make the Stars Think Better of Me”) was staged by the veteran director Jacques Allaire.

It is set in the depths of winter, in a mining camp such as you would have found during the Klondike gold rush of the late 19th century. The first scene is captivating. As a woman, Ruby (Marina Keltchewsky), watches from a makeshift tent, a man wearing a heavy fur coat inches his way toward the front of the stage in near darkness. His face isn’t visible, but the story he tells — of survival in the mountains and grief after losing his child with Ruby to the cold — is epic.

Mr. Bah and Mr. Allaire were inspired by the works of Jack London as well as Nietzsche’s “Thus Spoke Zarathustra,” and attempt to spin a philosophical parable out of the situation, as the small community around these two people is driven mad by the discovery of gold near the camp.

It’s ostensibly a tale about greed, but its construction isn’t tight enough to explain the swings in tone, or the character’s erratic reactions. When Zan, the father of Ruby’s child, suddenly goes on a murderous rampage, neither the text nor the direction really clarifies why. It’s a shame, because Jean-Pierre Baro has real gravitas in the part, while Criss Niangouna and Malik Faraoun bring verve to their roles as miners.

The less than half-full auditorium was more worrying for Le Tarmac’s hopes of a happy denouement to its current woes. As the only theater in Paris devoted to French-speaking artists from outside the country, it has served an important purpose in identifying talents from territories including former French colonies in Africa, who may face systemic obstacles elsewhere. Leaving Le Tarmac without a venue to perform in would close a door to the Paris stage for them.