About a decade into the podcast boom, I’m continuously surprised there aren’t more shows about classical music. It’s an ideal medium: Little can compare with the experience of hearing someone talk about a piece, then listening to it with enlightened ears.

Yet few in the field have taken advantage of podcasting. Which is why the debut this month of “Aria Code,” by WQXR and the Metropolitan Opera, is both a major event and a gift. Eminently listenable and often illuminating, the 10-episode series is like a bonus feature for opera fans, and a welcoming entry point for newcomers.

Four episodes have been released so far, and each follows a simple format. The host — Rhiannon Giddens, the polymathic musician and MacArthur “genius” grant recipient — takes a deep dive into a famous aria with diverse guests who have included singers, scientists and even a sex worker-turned-writer. Then she signs off by playing the song in full. That’s it; the whole thing usually lasts no more than 30 minutes.

It doesn’t always require your full attention — I’ve taken in episodes easily while walking my dog or shopping — but the show occasionally commands it nonetheless, through an endearing personal insight from Plácido Domingo, or an intensely captivating performance by a soprano like Diana Damrau and Sondra Radvanovsky. (A partnership with the Met, it turns out, provides enviable access to the company’s great singers and its audio archive.)

Ms. Giddens approaches these arias as a fan barely on the outside. She has conservatory bona fides by way of Oberlin but left opera to carve an idiosyncratic, celebrated niche in folk music. So she is knowledgeable, but not didactic or technical. And, by bringing in guests far removed from music, she goes beyond mere analysis to make classical music surprisingly relevant to modern audiences.

You come to understand a 19th-century courtesan’s emotions in the aria “Sempre libera” from “La Traviata” by hearing about the first time a present-day sex worker fell in love. The episode on “Dio, mi potevi scagliar” from “Otello” is a relatable meditation on envy and despair; and the most recent one, about “Vissi d’arte” from “Tosca,” is a moving reflection on the difficult sacrifices artists have always had to make. (Ms. Radvanovsky, a widely praised Tosca at the Met this season, unpacks her guilt in choosing to sing in the opera’s opening night over helping her mother move into an assisted-living home.)

Where the show’s approach falls short, however, is in the second episode, about “Che gelida manina” from “La Bohème.” The guests bring historical and scientific perspectives to the opera that rob it of its, well, operaness. Rodolfo and Mimì’s meet-cute is over the top and extremely charged, but so is this art form. To explain their extraordinary attraction with brain scans and anthropology seems unnecessary, even irrelevant. 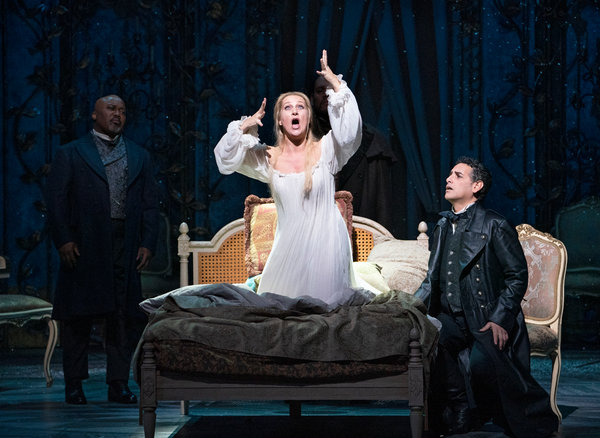 You may have also noticed that these four episodes have only featured music by two composers, Verdi and Puccini. Future installments will branch out somewhat — Saint-Saëns, Donizetti, Bizet, Massenet and Mozart — but “Aria Code,” by partnering with the Met, seems to have fallen into the company’s habit of narrow programming. Don’t plan to hear about the pathbreaking 17th-century arias of Monteverdi, or the fate of the aria in contemporary opera.

That problem isn’t limited to “Aria Code.” Another podcast, “Sticky Notes,” hosted by conductor Joshua Weilerstein and dealing primarily in symphonic music, is similarly informative and accessible, yet lacking in scope.

Most episodes of “Sticky Notes” are devoted to a single work. With endless enthusiasm and a curious mind, Mr. Weilerstein offers historical context and musical analysis (rarely too technical for outsiders), as well as a wealth of illustrative audio clips; the effect is like program notes for his concerts brought to life.

The works featured aren’t much different from what you’d hear from your local orchestra — which is to say “Sticky Notes” doesn’t stray far from the classical music canon. Occasionally, themed episodes feature, for example, female composers or “degenerate music” suppressed by the Nazis; but the treatment of these topics inevitably feels superficial compared with, say, a recent two-part exploration of Mahler’s Fifth Symphony.

To be fair, “Sticky Notes” is a humble operation, and Mr. Weilerstein shouldn’t be expected to carry the spread of history on his own. And, up until last year, contemporary classical music had been well represented in “Meet the Composer,” a podcast that ran from 2014 to ’17, also made by the New York Public Radio family that presents “Aria Code.”

Imaginatively produced by Alex Overington and hosted by the violist Nadia Sirota (who now hosts the New York Philharmonic’s Nightcap event series), “Meet the Composer” was devoted entirely to contemporary music; each episode was a vivid portrait, poetic yet informative, of a living composer. The archive is online and worth listening to — revisiting, even, if you’re about to hear a new piece by someone like Andrew Norman or Anna Thorvaldsdottir.

Ever since “Meet the Composer” ended, I’ve been waiting for a new show to fill the niche it left behind. “Classical Chicago,” a podcast by the record label Cedille, is one candidate; its episodes are tied to album releases, like a recent one featuring the violinist Jennifer Koh about the music of Kaija Saariaho. And it was heartening to see that New Amsterdam Records — a wide-ranging and essential label — recently announced it would launch a podcast, not yet titled, in 2019, “giving more people the opportunity to learn about music that is moving and meaningful.”

That mission sounds a lot like “Aria Code,” but the two shows are inherently different. One aims to illuminate great music of the past; the other, of the future. The ecosystem of classical music podcasts needs both.