When Brian Phillips came to New York in 1998, he quickly gravitated toward the downtown art and fashion scenes and, through internships at Paper, Elle and Visionaire, connected with other aspiring, boundary-smudging tastemakers and haunted contemporary art hot spots.

He also found mentors who guided him. Among them were Adrian Rosenfeld, now a San Francisco gallerist, who introduced him to a number of significant artists, and Nathalie de Gunzburg, chairwoman of the Dia Art Foundation, who, he said, “has one of the most phenomenal collections I’ve ever seen.”

Although he arrived to study architecture at Columbia, his career took a different turn and he founded Black Frame, an agency that represents clients in the arts, architecture and fashion.

As a collector, Mr. Phillips favors contemporary art and photography, often created by artists he has met, including Paul Lee and Matt Saunders. His taste in art is strikingly personal and he has acquired several homoerotic pieces. His collecting and social connections are intertwined: Mr. Phillips organizes his collection with the help of suggestions from friends and enjoys sharing discoveries with others in his circle.

“I started collecting when I was in my early 20s,” he recalled in a conversation in his apartment in the East 80s one recent sun-dappled afternoon — the sunlight favoring the art on his walls. These are edited excerpts from the conversation. 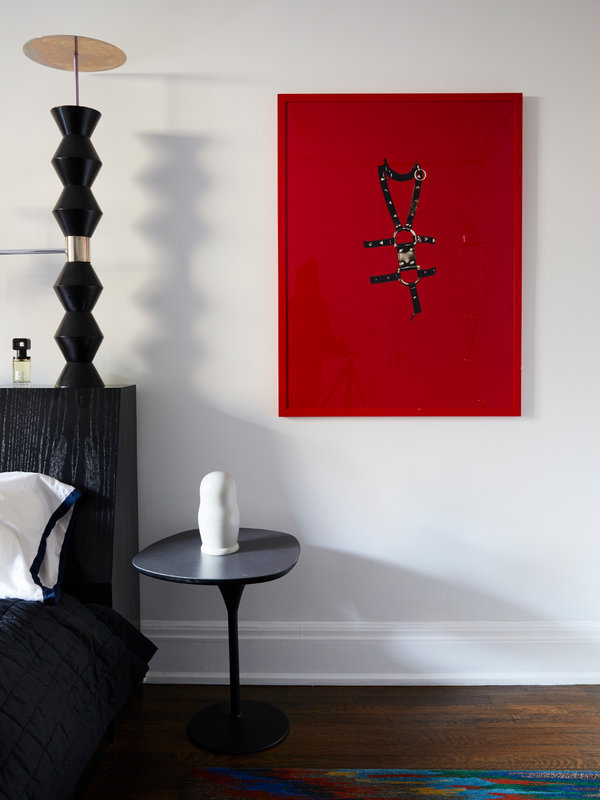 Is owning art better when you meet the artist?

Yes. It means a lot to me to collect this way. Sometimes I seek out artists after I’ve acquired the works. I also have several works by nonliving artists.

Many of the artists you collect are gay. Do you gravitate to gay artists?

Yes. Gay and lesbian artists have been marginalized in the canon. I feel compelled to do my small part to support their work and influence.

When artists are in your social and business circles, often so are their muses.

One of the first works I acquired was by the artist Matt Keegan and is a small photographic collage of Humberto Leon, my best friend. At the time, Keegan and Leon were dating. The work distilled the intimacy of their relationship.

Can you distill your own collecting aesthetic?

Sure. It’s painting that investigates the nature of painting. It’s photography with an undercurrent of eroticism.

I’d say that photograph above your mantel explains what you mean by “undercurrent of eroticism.”

Indeed. Hervé [Guibert] was a French writer and photographer who passed away from AIDS. The work [“Le Fiancé II,” a nude male in a diaphanous drape] is in black and white. It’s sensuous and personal, sexy but a bit somber.

The photographs on your mantel couldn’t be more different from the Guibert nearby.

Those are family photos! My mother is there with me as a child. Grandmother and Grandfather Phillips are in another. Grandfather was an artist. He mainly created landscapes. He took a very folksy approach to painting that reminded me of Bob Ross. Other than my grandfather, art to me growing up — and I grew up near Yosemite — was Ansel Adams. All Ansel Adams!

You were raised around great photography; you had an artist in your family; now you collect art and are friends with artists.

Let’s talk about the Wade Guyton in the hallway.

Wade Guyton’s a friend and I’ve always loved his work. I consider his work to be both inside and outside the canon of painting. He’s interrogating conventions, embracing them and also rebuking them. He prints most of his paintings on an Epson printer, which expands the definition of “painting.” I think of Wade as queering painting with his approach. As I came to understand more about his painting process I was gobsmacked.

And what’s with that tambourine in this painting? [Paul Lee’s “Thinking About It Then Knowing Now.”]

I like the idea of that sort of humor in painting. The tambourine’s made of metal, not wood, but it does make a sound.