PHILADELPHIA — When technology dashes forward, taste pussyfoots behind. Photography emerged around 1839, independently, in England and France. Through trial and error, the earliest practitioners learned for themselves how to use and improve the new processes. For aesthetic guidance, however, they relied on what they already knew.

The tension between the promise of the new and the tug of the old is one of the fascinations of “From Today, Painting Is Dead: Early Photography in Britain and France,” an exhibition at the Barnes Foundation in Philadelphia through May 12. The premature obituary in the exhibition title was supposedly pronounced by Paul Delaroche, a successful Parisian artist; and it is usually understood as an expression of painters’ anxiety that the new invention would kill their source of livelihood.

But the opening of opportunity more than compensated for any slammed doors. Some of the photographers in the Barnes exhibition — Gustave Le Gray, Roger Fenton and Charles Nègre — began as painting students of Delaroche and became photographers. Today their reputations outshine their teacher’s.

The roughly 250 photographs here — expertly curated by Thom Collins, executive director of the Barnes — date from the 1840s through the 1880s, and are owned by a couple from Scarsdale, N.Y., Michael Mattis and Judy Hochberg, whose equally outstanding collection of 20th-century photographs was previously showcased at the Barnes. The show is divided into categories like “landscape,” “portrait” and “still life,” that were used to classify 19th-century painting. The ranking is a reminder that photography’s pioneers regarded themselves as artists, not shutterbugs. And justifiably so. 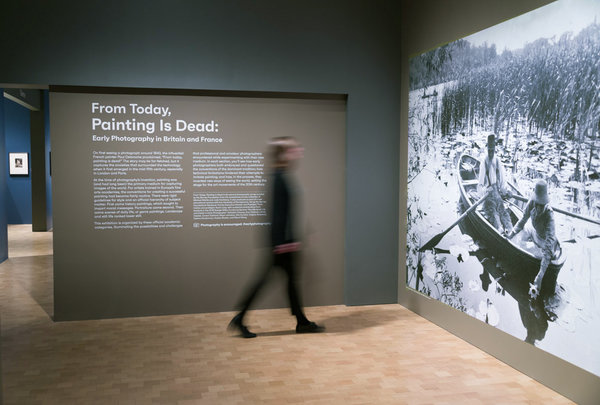 Le Gray’s “Oak Tree, Forest of Fontainebleau” (1849-50) and “Stormy Sky, Mediterranean Sea” (1857), stand up more than respectably alongside the studies of trees and clouds made by the premier nature painter of the century, John Constable. Because the silver iodide emulsions used at that time favored the blue end of the light spectrum, other photographers accepted blank, overexposed skies as the price required to open the aperture long enough to record the details of the sea or the countryside, which lay in shades of green below the horizon. Ingeniously (and secretly), Le Gray would combine two negatives that he had made — one for the sky, one for the water — to produce a finished print of a seascape that, as in “The Great Wave, Sète” (1857), revealed both whitecaps and clouds.

Most exhibitions of early photography zero in on an individual artist. A current show at the Metropolitan Museum of Art, for example, explores the daguerreotypes of Joseph-Philibert Girault de Prangey. An even tighter-focused exhibition at Hans P. Kraus Jr. Fine Art Photographs, until May 10, examines the work that William Henry Fox Talbot, one of the founding fathers of photography, produced at his ancestral home, Lacock Abbey, near Bath, England. In contrast to Louis Daguerre, his French rival claimant to the invention, Talbot didn’t train as an artist. He was one of those wealthy, well-educated 19th-century amateurs England was especially good at producing and whose tinkering proved epoch-making.

Talbot’s process used a transparent paper treated with light-sensitive salts to create a negative image (the areas most exposed to light would turn darker) that could then be reversed, by shining light through it onto photosensitive paper for the production of multiple, positive prints. Daguerreotypes are unique; Talbot’s calotypes, as he called them, inaugurated the reproducibility that became a hallmark of photography.

With Talbot, beauty slips in unannounced even when his aims were ostensibly prosaic. He had a natural flair for composition, and the fiber in his paper negatives sometimes lends a grainy, powdery texture to the prints.

In one of his last calotypes, “The Ancient Vestry” (1845), Talbot placed his friend and fellow photography enthusiast, Calvert Jones, small but conspicuous thanks to his black top hat and light trousers, in an arched stone recess, as the sunlight picks out every leaf of the ivy growing up the stone wall. In addition to 31 prints by Talbot and an exquisite one of leaves of grass by his assistant, Nicolaas Henneman, the exhibition at Hans P. Kraus includes work by four contemporary artists responding to Talbot; the most striking is a large print that Hiroshi Sugimoto produced from a facsimile negative of an oriel window at Lacock Abbey, which Talbot made around 1835 and never printed.

Talbot, like Le Gray, was a star player, but as the Barnes show reminds us, the thrilling possibilities at the dawn of photography attracted many brilliant practitioners. Sometimes, we admire them for achievements they may not have intended. Auguste Salzmann made close-ups of the stonework of Jerusalem to bolster archaeological suppositions about the dating of the monuments; today, when we have been exposed to the Ab Ex-influenced Martha’s Vineyard wall pictures of Aaron Siskind, Salzmann’s pictures are appreciated as studies in form and texture. John Beasley Greene, who died of tuberculosis at the age of 24, made his spare “View of Luxor,” of a pale desert and sun-bleached sky separated by a zigzag line of buildings and trees, in 1854. That was a generation before James Whistler’s nocturne paintings, but our appreciation of Greene is colored by our experience of Whistler.

The highly accomplished Julia Margaret Cameron produced many great portraits of prominent Victorian intellectuals, yet she can often slip into treacly sentimentality — particularly when she turned to children. There are some of those toothache-inducing renderings at the Barnes show. There is also, however, “Déjatch Alámayou, King Theodore’s Son” (1868), Cameron’s haunting portrait of an Ethiopian prince whose father had committed suicide after his defeat by the British. Brought to England by Queen Victoria, the prince sits in front of a shield and cradles an obscure object (other shots reveal it to be a white doll), with a melancholy air of noble stoicism. He might be an enslaved royal captive in classical times.

It is remarkable how few of the photographs in the Barnes exhibition lack artistic merit or are chiefly of documentary interest. At first, that might be thought of a sheet of uncut cartes de visite that recorded the execution of Emperor Maximilian I. It was designed to be divided up, and those passport-size photographs were then bought by Mexicans celebrating after the downfall of the French-imposed ruler in 1867. But viewing the multiple images of the corpse through today’s art-historical context, we can’t help but be reminded of the silk-screen paintings in Andy Warhol’s “Death and Disaster” series.

However, no anachronistic comparisons are required to make a case for Nadar’s showstopping portrait of the literary titan Victor Hugo on his deathbed in 1885. Born Gaspard-Félix Tournachon, the larger-than-life Nadar — theatrical down to his signature, with the “N” extending like an umbrella and the “R” trickling like a waterfall —— depicted with Romantic brio the artistic giants of Paris, who were also his friends. At the outset of his career, in collaboration with his younger brother, Adrien Tournachon, he printed on salted paper. “Pierrot Climbing Through a Window” (1854-55), the finale of a sequence depicting a mime in white costume and black skullcap, glows with the beautiful violet-brown tones characteristic of silver chloride prints.

Nadar was a technical innovator. The exhibition includes two photographs he shot in the early 1860s in the Paris catacombs, illuminating the subterranean cavern with a magnesium flash of his own design. For the Hugo portrait, he made early use of a photo enlarger, and the oversized gelatin silver print holds a wall at the Barnes — not simply by virtue of its size, but also with its commanding presence. By cleverly employing a mirror to reflect the glow of a streetlamp into the bedroom, Nadar created a chiaroscuro of light and darkness. Every strand of Hugo’s white beard glistens; his forehead is cooled with shadow.

It so happens that a grieving Delaroche 40 years earlier had painted his wife, Louise Vernet, on her deathbed, placing a halo around her head. There is no halo adorning Hugo. One isn’t needed. The suffusion of heavenly light that bathes the revered figure makes clear that, after his death, he is destined for immortality. Whether painting, in the wake of photography, is itself now dead — that question is left open.

From Today, Painting Is Dead: Early Photography in Britain and France 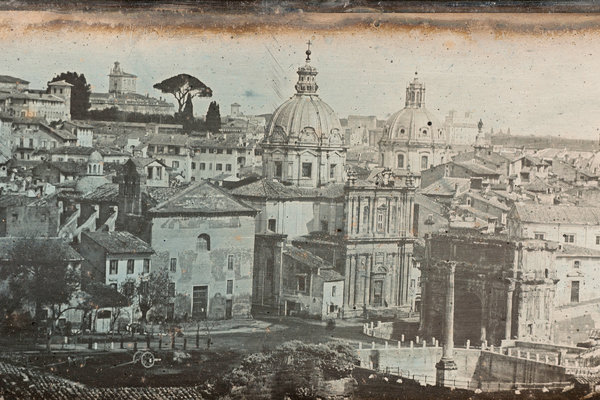 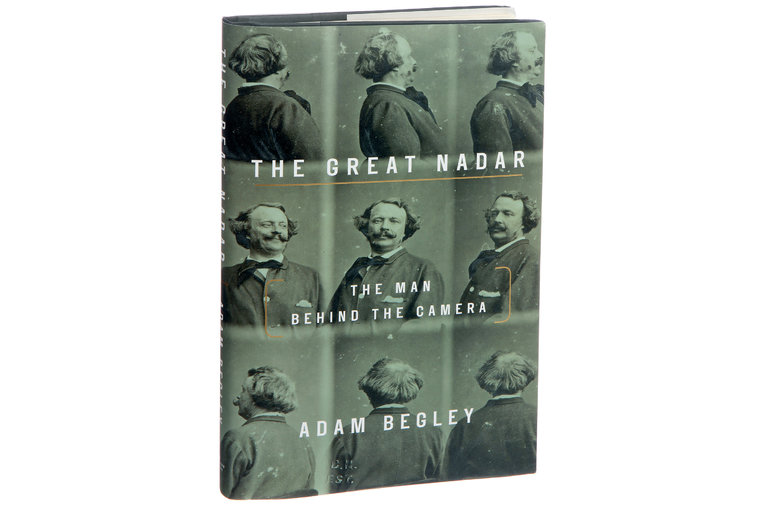