How can you get your cultural fix when many arts institutions remain closed? Our writers offer suggestions for what to listen to and watch, as well as see in person at a gallery.

Sad Songs of a Lonely Pest 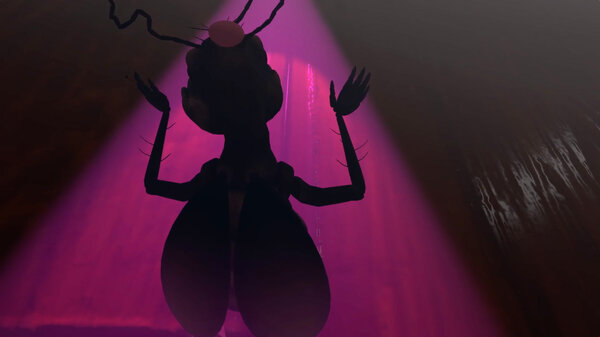 When the playwright Krista Knight received the news that her play “Crush” would no longer be produced because of the pandemic, she imagined a version she could stage in the 500-square-foot home studio in the East Village she shares with her collaborator, Barry Brinegar.

The result is a six-part series (the finale arrives on Friday) streaming on YouTube. Ranging from about two to four minutes, each episode stars a cockroach (voiced by the actor Ben Beckley, who did his voice-overs through Zoom) soliloquizing about the absence of the tenants in the apartment where it lives.

No tenants, no food.

The socially conscious insect challenges the tenants’ disappearance and wonders if they’ve fled to the Hamptons to pretend they’re rich. “I know you’re not; I live in your walls,” it exclaims.

Beckley’s suave voice work, paired with the virtual-reality puppetry Knight and Brinegar developed to capture Beckley’s movements, creates the ultimate New York character, someone we barely pay attention to in real life, but who is part of our world.

As the cockroach takes over the apartment, the series turns into a heartbreaking countdown: Will the tenants be back in time to feed the bug the crumbs it needs to stay alive? Will the roach be another New Yorker who succumbs to indifference? JOSE SOLÍS

Between the quarantining, sheltering in place, social distancing and other restrictions enacted to prevent the spread of the coronavirus, you may feel like you’re caged enough as it is. So why not embrace your inner Cage? Nicolas Cage, that is.

Last summer in Prospect Park, Sebastian DiNatale, a field producer for “The Daily Show With Trevor Noah,” and Zach DiLanzo, a writer for the late-night series, staged “Cage in the Park,” a farcical production that presented Cage’s 1997 film “Face/Off” as a Roman/Shakespearean tragedy. They had hoped to make their parody an annual event, but the pandemic had other ideas.

DiNatale and DiLanzo’s solution: “Night of Too Many Cages,” a livestream fund-raiser featuring multiple impersonators, a celebration of Cage’s eclectic filmography and a telethon hosted by the comedian and actor Chris Gethard (who can also be seen lightheartedly reminiscing about childhood traumas in the recent documentary “Class Action Park” on HBO Max).

The event begins on Saturday at 8 p.m. Eastern on the Planet Scum Live page on Twitch. Viewers also can follow along through Cage in the Park’s Facebook page and YouTube channel. Donations, which will benefit Artists Striving to End Poverty, can be made through Sunday on the telethon’s page on Tiltify. SEAN L. McCARTHY

Return of a Resilient Gallery

The survival instinct that Artists Space developed over its 48 years to outrun the ever-changing landscape of Lower Manhattan may serve as a paragon of tenacity when the existence of many cultural institutions is under threat by the pandemic. Just three months after the gallery unveiled its new, more permanent space in TriBeCa, the shutdown occurred. Earlier this month, the gallery reopened to the public by appointment only.

On its lower level, the performing arts live on in “She Who Is: Adrienne Kennedy and the Drama of Difference.” It contains archival material related to Kennedy, a prolific Black playwright, and her genre-defying oeuvre, which almost always made visible the complexities of Black womanhood, as well as ephemera related to “what had been significant to her and for her,” said Hilton Als, who organized the show with the gallery’s executive director, Jay Sanders.

On the main floor, Jana Euler’s “Unform” directly responds to its space; Euler conceived the show’s works after making multiple visits during the gallery’s construction. The resulting slug sculptures, manipulated to fit within the room, coexist with her paintings, which, as usual, depict ungainly yet attractive figural distortions.

Both exhibitions will be on view through Sept. 19. The gallery is open Wednesday through Saturday, from noon to 6 p.m.; appointments can be made at artistsspace.org. MELISSA SMITH

When I interviewed the Salzburg Festival artistic director Markus Hinterhäuser in 2018, he agreed with my saying that the classical music scene needs more recordings of operas by Hans Werner Henze. Now, in addition to Salzburg’s home video release of Henze’s “The Bassarids,” we have the DVD release on Friday of the modernist composer’s 1960 opus, “The Prince of Homburg,” courtesy of Staatsoper Stuttgart. (As with many of his operas, Henze published a revision in the 1990s; that’s the edition documented here.)

Ingeborg Bachmann adapted her libretto for the opera from the 19th-century play by Heinrich von Kleist. Bachman and Henze were intrigued by its conflict between military chain of command and individuality. Tellingly, the music darts among varied compositional styles and their associated rule books; Henze melds atonality, late Romanticism and even a fleck of jazz, a blend that feels like testimony on behalf of the opera’s idiosyncratic Prince.

The leads in the Stuttgart version, including Robin Adams (as the Prince) and Vera-Lotte Boecker (as Princess Natalie), have access to the requisite fireworks and subtlety, but the cast is not uniformly strong. Still, the conductor Cornelius Meister leads a punchy, thoughtful take on a complex work you’re not likely to see staged. And since DVDs of Henze’s operas have a habit of going out of print, interested listeners are advised not to wait. SETH COLTER WALLS

Last year, the saga of Lil Nas X’s “Old Town Road” — its explosion on TikTok, its ascent on and subsequent removal from the country charts — was a red-hot topic for critics. In the eyes of the singer Rissi Palmer, most of the coverage shared a flaw: a conspicuously narrow telling of the scope of Black influence in country music. This shortcoming gave Palmer the idea for “Color Me Country,” her new radio show on Apple Music, which debuted late last month.

Borrowing its name from the 1970 album by the trailblazer Linda Martell, “Color Me Country” aims to celebrate people, and particularly women, of color who have been excluded from the prevailing country music narrative. Palmer’s first subject is herself: Much of the first episode is spent introducing listeners to her story (in 2007, her song “Country Girl” ended a 20-year absence of Black women on Billboard’s Hot Country chart) and her influences (including Martell, Patty Griffin and Patsy Cline).

On the next episode, which airs on Sunday at 9 p.m. Eastern, Palmer’s guest is the singer Miko Marks. The pair will discuss barriers that performers of color face in Nashville, the story behind Marks’s probing song “Goodnight America” and more.

An Apple Music subscription is not needed to access the live broadcast, but only subscribers can stream episodes on demand after they air. OLIVIA HORN

The Dance Now festival has always been about finding possibility in limitations of time and space, with artists devising works of five minutes or less for the small stage at Joe’s Pub. So it’s no surprise that, faced with restrictions on gathering in person, the organizers responded with a creative alternative.

For its 25th anniversary, the festival will roll out online in six chapters — one a month from September through November and March through May — featuring a mix of new digital commissions and recordings from the Dance Now archive. Once released, each installment will remain at dancenow.online through June 2021. (Individual tickets are $10, and subscription packages are also available.) The first chapter, which went live on Thursday, includes new works by the cheeky trio LMnO3, the camera-fluent choreographer Mike Esperanza and the brilliant tapper Ayodele Casel, along with older pieces by Tricia Brouk and members of the collective Huma.

Each month also brings an “artist-to-audience celebration” in honor of a veteran Dance Now artist, beginning with Gus Solomons Jr. on Sept. 24 at 7 p.m. Eastern. Although it might be hard to replicate the bustling atmosphere of Joe’s Pub over Zoom, these virtual soirees, complete with suggested cocktail recipes and after-parties, will try to channel that cabaret spirit. SIOBHAN BURKE

Many of us would love to say goodbye to the current year. For some families, that opportunity is fast approaching: Rosh Hashana begins on the evening of Sept. 18. Also known as the Jewish New Year, this holiday is a time to reflect, rejoice and, of course, make some noise. In synagogues, that means blowing the shofar, a ram’s horn. At the Jewish Museum’s virtual celebration on Sunday, a guitar will star, too.

That’s when ShirLaLa, a.k.a. Shira Kline, will give a free 40-minute concert for children ages 3 to 7. Streaming at 10 a.m. Eastern on the museum’s YouTube channel, where it will remain afterward, the event will also include vivid imagery and an art project.

Incorporating whimsical animations by the artist Charrow, the show will demonstrate why Rosh Hashana is considered the world’s birthday. While the program, which requires online registration, chronicles the creation story in Genesis, the music will comprise not only traditional Jewish songs but also bits of American classics (“This Little Light of Mine,” “You Are My Sunshine”) and contemporary tunes (Ellen Allard’s “Shofar Blast”).

And what’s a birthday without wishes? Using materials including cardboard, fabric scraps and magazine cutouts (a full list is on the website), young listeners will collage a greeting card to convey all that New Year’s joy. LAUREL GRAEBER