NORTH BEND, Wash. — On the side of a towering rock face, Cing Kim gingerly placed her left foot on a small ridge. She tried to grab a higher ledge with her hands, but the tips of her fingers slipped, and she fell back a few feet onto an overhanging ledge. 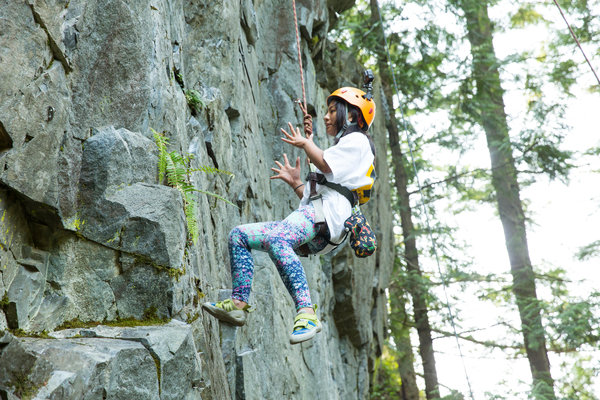 She had been trying to get over the same section of rock for 10 minutes. Her hands were shaky, and she was out of breath. She told the volunteer belaying her that she was ready to be lowered to the ground.

As Cing tried to recover during this late summer trip to Olallie State Park, 45 miles outside of Seattle, a program coordinator, Amanda Cook, approached.

“Whenever things are hard, we try again, right?” said Ms. Cook, who works with young people in the Seattle area through the International Rescue Committee.

It was advice she expected Cing Kim and her two best friends, Cing Sung and Cing Lun, to use during the rock-climbing excursion. And it is advice she hopes the three Cings (it’s a common name in their home country of Myanmar) continue to use as they build their new life in the United States.

The girls, ethnically part of the Zomi tribe, fled Myanmar because of persecution, and they have been adjusting to myriad new ways of life over the last few years.

The trip in August was part of a new rock-climbing program for refugee children in middle and high school. Called the Climbing Higher Stonemasters Program, it was organized by the International Rescue Committee, one of the eight organizations supported by The New York Times Neediest Cases Fund, and Vertical Generation, a nonprofit organization that brings climbing to underserved and low-income children.

Initially created as one-off field trips, the outings proved so successful that an eight-week program was introduced last spring. Eleven refugee children spent three hours each week at a local gym, meeting with mentors to work on homework and practice English, before jumping on the climbing walls.

“It was amazing,” said Cing Sung, 13, who has been climbing in the program since last spring. “We made a lot of friends, and adults are really nice, and they help us do our homework.”

Over the summer, the organizations took the children outdoors for two rock-climbing excursions. And last month, the program started back up with regular weekly tutoring and climbing.

The young climbers have fled war or persecution in countries like Bhutan, Iraq and Syria. Their transitions to the United States are often challenging. Many have huge gaps in their schooling and are trying to get caught up in the classroom, Ms. Cook said. They are trying to build stability in their lives as they go through the turbulent teenage years.

“A lot of our clients say coming to the U.S. and resettling here was the hardest thing they’ve had to do,” said Adrienne Ramm-Granberg, senior development coordinator for the International Rescue Committee. “And they’ve often come from what I would consider unimaginable circumstances.”

The program’s individualized tutoring helps the youths improve in school and advance their English, while the climbing develops their life skills, Ms. Cook said. Facing a daunting climb and determining the best route builds problem-solving. Motivating them to get back up after falling builds perseverance.

Those are attributes that Cing Kim, frustrated and tired on one of her last outdoor climbs of the summer, was picking up on. Thirty minutes after coming down from the side of the rock face that day, she put her harness back on and gave it another try. As her friends cheered her on (with Cing Sung and Cing Lun sometimes shouting in their native Zomi), she was able to make it much higher than her first try.

Cing Kim came to the United States from Chin State, a small rural area in western Myanmar with a history of human rights abuses, including forced labor, Ms. Ramm-Granberg said. She and her family fled to Malaysia before moving to the United States six years ago. Then Cing Sung and her family moved into the same apartment complex in 2016. On the first day of school, the girls sat together on the bus, and Cing Kim showed her new friend around.

“My first day of school, there was nobody to help me. It was only me and my brother,” Cing Kim said in an interview over the summer. “I wanted to help out so they don’t get scared too.”

When Cing Lun, now 13, her four siblings and her mother came to the United States to join her father in February, they moved into an apartment a block from the other two Cings in Tukwila, just outside Seattle. As soon as the pair heard about a girl their age from Myanmar, they headed straight to her home to introduce themselves.

Now they go to the same school and get together regularly. Cing Kim and Cing Sung have used their combined experience to help Cing Lun settle in. They often step in to translate for her and explain how things like the bus system work.

When it came to rock climbing, each started off as a beginner.

“We didn’t even have a full meal in a day, so I don’t think they’d be able to afford to send us to have all these activities if ever there was such a program back at home,” said Cing Sung, speaking partly in Zomi through an interpreter.

After just a few climbing trips, the girls have mastered the figure-eight knot for tying their harness into a rope and the lingo used on the climbing walls. With each new climbing route, they are learning that facing struggles and trying to overcome them are important parts of learning and improving.

At the end of the outdoor climbing trip this summer, the group circled up to talk about what each child had enjoyed most.

When it came time for Cing Kim to share, she said, “My favorite part was when I tried my second time and got higher than my first time.”