Justine Hill’s bright, multipart paintings are good and good fun, but it has taken some serious work to get them there. You can see it happening in “Touch,” her latest solo show in New York.

Five years ago, Ms. Hill broke her paintings into separate parts by cutting out eccentric shapes in plywood that she would cover with canvas, paint with various colors or patterns and hang together in rectangular configurations on the wall. The plywood is thin, making the works seem flatter to the wall than most paintings. They might almost be frescoes.

The paintings from 2020 are better than those from 2019 (one is on view; three are in the catalog). Looser, jauntier, they make more of less. Ms. Hill has been using more white: that is, arranging the parts of her paintings over greater areas of wall space. This expansion helps. She’s also using fewer colors (often two) on each part. And there’s as much drawing as painting: repeating waves in, say, goldenrod yellow or lipstick pink on black or white and networks of intersecting lines, some of which form harlequin patterns. The shapes often have resemblances — sometimes more than one — to columns or arches, tables or stools, baskets or vases. In fact two of the larger works, “Kilter” and the appropriately titled “Handwork” (craft is a big subject here), can read as stage-set-like interiors. 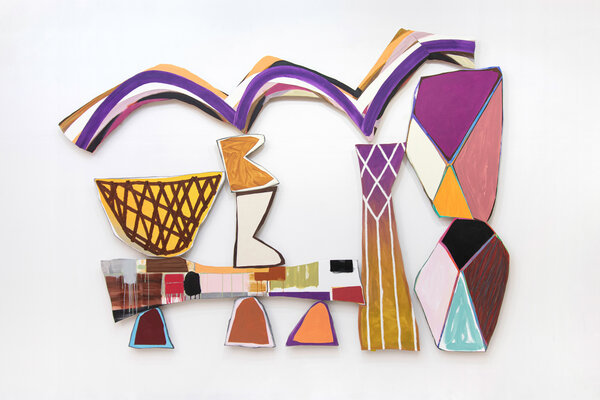 In the three paintings from her new “Replica” series, Ms. Hill heads in a more abstract direction, which is promising. In addition to Matisse and Picasso, she has paid attention to 1970s Pattern & Decoration painting, the ceramic wall pieces of Betty Woodman and the shaped paintings of Elizabeth Murray. Ms. Hill’s work proves that earlier ideas can always sustain new thought.
ROBERTA SMITH

Kevin Beasley’s show “Reunion” at Casey Kaplan is packed with art works. (In other words, it’s a bit overhung.) Some of the works are very good, and some are just OK. In total, however, the exhibition, titled after the family reunion Mr. Beasley attends in his native Virginia every August, effectively mixes the personal with the political, the past with the present, and the local with the national at a critical moment in our history.

Mr. Beasley, a New York-based artist whose work often considers the legacy and landscape of the American South, has a signature style and approach. Using found clothing, fabric and other materials, he packs these together and applies polyurethane resin to compose pictures that sit somewhere between sculpture and painting. Sometimes everything coheres beautifully, as in “The Road” (2019), a rectangular work that includes durags, caftans, feathers, raw and dyed cotton, a mobile phone, socks and boots, as well as soil, twigs and pine needles from Virginia. Here, materials are shaped into a transcendent image that nods both to the history of his ancestors (his family has continued to farm the Virginia land) and the Great Migration of Black Americans from the South. With its electric-yellow upper quadrant, it also suggests a blaze of brightness and impending hope.

Other works, like “Recliner” (2019-20), a figurative sculpture that conjures a specter or a shrouded corpse, are more ominous. Texts embedded in the resin in many of the works here detail brutality inflicted upon Black people, underscoring what it means to walk through the world under constant threat. All of this feels relevant in relation to thinking about race in the United States and the resurgence of the Black Lives Matter movement.
MARTHA SCHWENDENER