Our guide to pop and rock shows and the best of live jazz happening this weekend and in the week ahead.

ADELINE at C’mon Everybody (May 1, 8 p.m.). As the frontwoman of the Brooklyn band Escort, this Parisian-born singer lent her sultry vocals to slick nu-disco tracks. Now performing solo, she remains committed to her 1970s influences, as seen on the self-titled debut album she put out in November. After playing her record release show at this bar in Bedford-Stuyvesant, Brooklyn, Adeline returns for the first of four Wednesday-night concerts, over the course of which she will feature guest artists like the funk group IGBO and the electronic duo Life on Planets.
cmoneverybody.com

FOXING AND NOW, NOW at Warsaw (April 26, 8 p.m.). These joint headliners share Midwestern roots and emo proclivities. Foxing, a four-piece from St. Louis, most recently released a third album of indie-rock songs, which have grown more ambitious and expansive through the addition of lush synths, strings and, on one track, bagpipes. Their Minnesota-based tour mates, Now, Now, also made strides with their third album, last spring’s “Saved” — a record that ended a six-year lull and maintained the dark intensity of their previous work while introducing a new pop sheen, best heard on songs like “MJ” and “Yours.”
212-777-6800, warsawconcerts.com

TALIB KWELI at Brooklyn Bowl (May 1-3, 8 p.m.). A noted rapper, activist and sometimes Soulquarian, this Brooklyn native is perhaps best known as one half of Black Star, opposite Mos Def. Since the duo effectively dissolved in the early 2000s, Kweli has released solo music at a consistent clip, most recently on “Radio Silence,” the 2017 record on which he returns to a slate of topics that have become his bread and butter — police brutality and toxic masculinity among them. Special guests at Kweli’s three-night engagement in his home borough will include the poet Jessica Care Moore, as well as Niko Is and K’Valentine, two artists signed to his Javotti label.
718-963-3369, brooklynbowl.com

JACKIE MENDOZA at Park Church Co-op (April 26, 7 p.m.). This Mexican-American singer’s music is often described as “ukulele electropop,” but with its reggaeton and ambient touchstones, it feels much more eclectic than that label might suggest. A former member of the Brooklyn-based shoegaze band the Gingerlys and the psych-pop group Mint Field, from Tijuana, Mexico, Mendoza has been writing and recording music on her own since high school and is finally set to put out her debut solo EP, “LuvHz.” Her performance on Friday in Greenpoint, Brooklyn, coincides with its release date; expect her to perform highlights from the recording, including “Mucho Mas,” a dense experimental track on which she sings in Spanish about how there is “way more out there” for her.
adhoc.fm

[Read about the events that our other critics have chosen for the week ahead.]

MR. EAZI at Brooklyn Steel (April 28, 8 p.m.). This Nigeria-bred artist, born Oluwatosin Ajibade, has termed his signature style “banku music,” after the traditional Ghanaian dish — a winking reference to critical takes on his languid vocal style, which gives the impression of someone who has just had a heavy meal. Sonically, Ajibade’s music blends elements of highlife, a genre native to West Africa, as well as dancehall and rap; his palette will likely expand because he aims to “push every boundary and erase any genre lines,” as he told The Los Angeles Times last week. On Sunday, Mr. Eazi returns to Brooklyn, where he played his first-ever show in the United States back in 2016.
888-929-7849, bowerypresents.com

PUP at Brooklyn Steel (April 26, 7:45 p.m.). “I got stuck on death and dying and obsessive thoughts that won’t let up,” this Canadian rock group’s lead vocalist Stefan Babcock sings on their new album, which is aptly titled “Morbid Stuff.” The band can be cruel (“Just cause you’re sad again, it doesn’t make you special at all” is their refrain on one track) and self-deprecating (their name is an acronym for “Pathetic Use of Potential”), but their energy is boundless. Their opener, Diet Cig — the duo of Alex Luciano and Noah Bowman — are the rare act that can keep pace, with buoyant pop-punk tunes punctuated by Luciano’s signature high kicks.
888-929-7849, bowerypresents.com
OLIVIA HORN 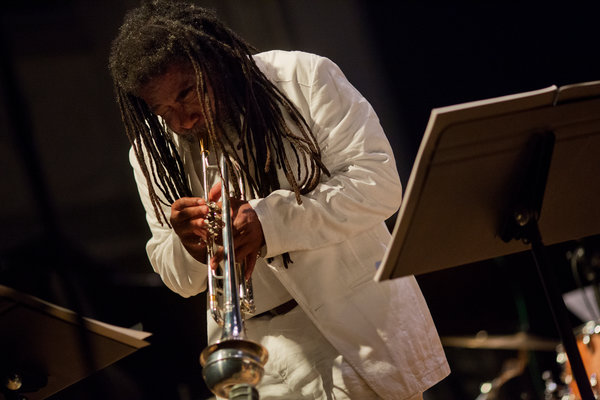 ‘A BIRTHDAY TRIBUTE TO ELLA FITZGERALD’ at Smoke (April 26-27, 7, 9 and 10:30 p.m.). The vocalists Charenée Wade and Brianna Thomas both root themselves snugly within the bluesier realms of jazz’s vocal tradition, and though neither sounds much like Ella Fitzgerald, there is no escaping the influence of the First Lady of Song. Wade’s clear but forceful voice will lead the way on Friday; the next evening, Thomas — whose singing is laden with rousing, youthful energy — will take the helm.
212-864-6662, smokejazz.com

MARIZA at the Town Hall (May 1, 8 p.m.). Since right around the turn of the millennium, Mariza has carried the lineage of fado — a Portuguese tradition centered on songs of heartache and lament — into the present day, drawing upon the deep sensitivity and raw, cinematic power of her voice. Born in Mozambique, she moved to Lisbon as a girl and learned fado at the knee of the music’s elders. Here she will perform pieces from her acclaimed, self-titled 2018 album.
800-745-3000, thetownhall.org

TOMEKA REID at the Jazz Gallery (April 26, 7:30 and 9:30 p.m.). Among the rising stars on jazz’s avant-garde, few are busier or more widely praised than Reid. The cellist — who recently released an album of duets, “The Mouser,” with the drummer Filippo Monico — enjoys the empowerment and open possibility of free improvisation, but she also seeks the firm foundation of a steady groove. Her clearly articulated, lyrically imaginative cello playing can fulfill a range of roles in quick succession: melodist, beat maker, textural accompanist. At the Jazz Gallery she will perform in two separate formations: a duo with the drummer Tomas Fujiwara (nodding to her new album) and a longstanding quartet featuring Fujiwara, the guitarist Mary Halvorson and the bassist Jason Roebke.
646-494-3625, jazzgallery.nyc

KARRIEM RIGGINS at the Blue Note (April 30-May 1, 8 and 10:30 p.m.). Riggins, a drummer and producer, has dual citizenship in the worlds of straight-ahead jazz (he has been a sideman for Mulgrew Miller and Diana Krall, among others) and left-wing hip-hop. His two albums, 2012’s “Alone Together” and last year’s “Headnod Suite,” attest to the strong influence of J. Dilla — the game-changing rap producer who mentored Riggins — but have a heavy swing vibe reflective of Riggins’s drumming. He recently served as one-third of the crossover supergroup August Greene, which also features the keyboardist Robert Glasper and the rapper Common. Here he presents a band of his own, one likely to toggle between hip-hop, dub reggae and jazz.
212-475-8592, bluenote.net

RENEE ROSNES QUARTET at Flushing Town Hall (April 26, 8 p.m.). Rosnes, a pianist, is still riding high on the success of last year’s “Beloved of the Sky,” an album of original compositions inspired by the paintings of Emily Carr. Its original pieces range from tangled melodic webs to coolly meditative exhalations. Taken together, they amount to a reckoning with the legacy of post-bop’s piano heroes: The ghosts of Cedar Walton, Andrew Hill and Geri Allen are alive in Rosnes’s playing. In Queens, Ms. Rosnes appears with two members of the band from the album — the vibraphonist Steve Nelson and the bassist Peter Washington — as well as the drummer Lewis Nash.
718-463-7700, flushingtownhall.org

WADADA LEO SMITH at the Kitchen (April 26-27, 8 p.m.; April 28, 3 p.m.). This trumpeter, composer and farsighted musical thinker has only ripened with age; at 77, he’s making some of the most affecting music of his career, and he is as prolific as ever. His most recent album is “Rosa Parks: Pure Love. An Oratorio of Seven Songs,” on which he blends brass, electronics and a string quartet to make slow, glassy music that’s often as faint as a memory, yet as urgent as a protester’s chant. He presents the 15-part work here alongside a deep cast of collaborators: The Diamond Voices trio, the RedKoral string quartet, the BlueTrumpet Quartet and the Janus Duo (Pheeroan akLaff on drums and Hardedge on electronics) will all be onstage with him. Jesse Gilbert will present a video component, and the butoh dancer Oguri will also perform.
212-255-5793, thekitchen.org
GIOVANNI RUSSONELLO

BC35 VOL. 2 RECORD RELEASE SHOW at Market Hotel (April 25, 8 p.m.). It’s an anniversary so right, Martin Bisi needs to celebrate it twice. Last week, this proprietor of BC Studio, which birthed such seminal albums as Swans’ “The Great Annihilator,” dropped the second volume of a compilation that commemorates his studio’s 35th birthday. The lineup this time is about the same as last year’s party for the first volume, with a couple of tweaks: Genevieve Fernworthy of Tidal Channel will kick things off with a five-piece that includes the drummer Stephen Moses from Alice Donut; Bisi will perform with the drummer Bob Bert, the bassist Ryan Skeletonboy and members of Pop. 1280 and Parlor Walls; the bassist Algis Kizys will rejoin Phil Puleo on percussion and Jim Coleman on electronics to unveil two new songs, but this time Dana Schechter from Insect Ark will add her bass skills to their mesmerizing, marvelous drone; White Hills will top that off with their next-level psychedelia; and best of all, Live Skull will end the night, playing together under that name for the first time in 30 years.
markethotel.org
DANIELLE DOWLING