Welcome to the weekend. To say it’s been a busy news week may be a small understatement. We began with devastating news out of Paris as a fire ravaged the Notre-Dame cathedral and ended with the release of the redacted Mueller report. For those celebrating this weekend, we hope you enjoy your holiday and some great reads along the way. 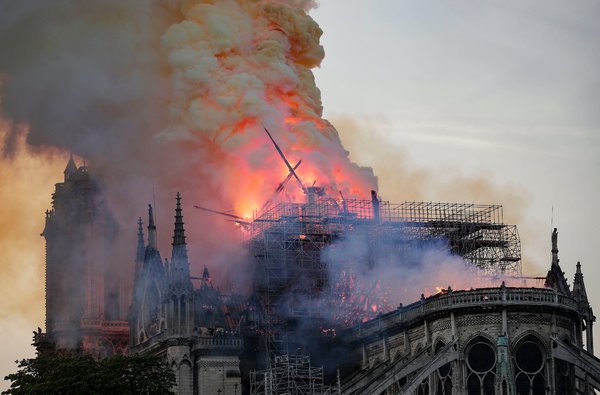 1. A France in Turmoil Weeps for a Symbol of Paris’s Enduring Identity

For centuries, the Notre-Dame cathedral has enshrined an evolving notion of what it means to be French. As smoke and flames wafted into the sky on Monday, the symbolism was hard to miss, our architecture critic writes. Foreign

[Also read: The Chaplain, the Cathedral Fire and the Race to Rescue Notre-Dame’s Relics]

2. ‘When the Glaciers Disappear, Those Species Will Go Extinct’

America’s glaciers are losing ice as the world warms. That’s disrupting habitats for fish, insects and even bacteria. Our climate reporter and a photographer traveled to the Pacific Northwest and Alaska to see how glacial melting is affecting the natural world. Climate

A hand-held device is bringing medical imaging to remote communities, often for the first time. Science

Ms. Haspel, the C.I.A. director, has proved to be an adept tactician in dealing with the president, but there is little evidence he has heeded her work to change policy. Washington

5. For Many Latino Players, Roberto Clemente’s Number Is Off Limits, Too

Only Jackie Robinson’s No. 42 has been officially retired across the major leagues, but many players have gone out of their way to not wear Clemente’s No. 21. Sports

[Also read: At Colorado, a Breach in Football’s Wall]

6. The Most Measured Person in Tech Is Running the Most Chaotic Place on the Internet

YouTube’s C.E.O. spends her days fretting over “Condom Challenge” and bestiality videos, talking advertisers off the ledge and managing a part of Google that generates as much revenue as Netflix. Business

A century after its founding, see where the school’s architectural legacy stands in seven countries around the world. Arts

8. ‘I Want What My Male Colleague Has, and That Will Cost a Few Million Dollars’

Women at the Salk Institute in San Diego said they faced a culture of marginalization and hostility. The numbers from other elite scientific institutions suggest these women are not alone. The Magazine

9. Let He Who Is Without Yeezys Cast the First Stone

Should pastors wear $5,000 sneakers? There’s been soul-searching recently over materialism in houses of worship. New York

The talk show host’s interview of the acclaimed biographer is a long-awaited win for Team Coco. Styles

In the Kenyan capital, Mexican culture is everywhere: on television, in restaurants, and even at the airport. Here’s a primer on the latest global mash-up. Travel