Moir sketches in the details: “Piers Morgan once reacted to a painting of mine. A friend in Deal used to live next to Richard Arnold, who works with Piers on Good Morning Britain. “One day my friend, Richard and I all went for lunch together. Richard had seen my ­portrait of Piers at a gallery in Deal. So he asked me, ‘Can I take it to work and show it to Piers?’ “The next day on air, Richard showed it to Piers who said, ‘Who did he use as a model for me? Jabba the Hutt?!’” But Piers is far from being the only TV ­personality he finds inspirational – as a ­portrait subject. “I always like doing Simon Cowell,” he admits. “He almost asks to have the mickey taken out of him.”

And if including less-than-flattering studies of the rich and famous in his new volume of paintings, Vic Reeves Art Book, puts Moir on the receiving end of criticism – or “more opportunities for negative reactions” as he puts it – is he worried about that?

“I couldn’t care less,” he answers joyfully. Neither is Moir, 61, concerned about ­falling victim to the prevailing so-called ­cancel culture.

As Vic Reeves, he has been in a very ­successful double act with Bob Mortimer since 1986 when Mortimer loved what he was seeing so much that he jumped on stage at the Goldsmith’s Tavern in New Cross, London, and joined the act.

And he believes that his work – both on canvas and in comedy – is too wacky ever to offend anyone.

“Bob and I never really went down that line – we were always too abstract, and we’ve always avoided politics.”

The duo teamed up for such hit TV shows as Vic Reeves Big Night Out, The Smell of Reeves and Mortimer and Shooting Stars, and, while their surreal comedy was as far from mainstream as it’s possible to get, they rarely attracted criticism.

“The most complaints we ever had was on Shooting Stars when we brought on a stuffed buzzard with a crucifix around its neck,” recalls Moir. “A lot of Christians wrote in to complain that birds couldn’t be Christians.” 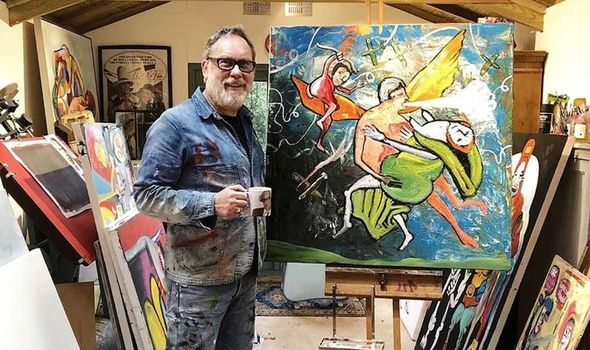 Moir’s art is just as delightfully daft. His book includes such weird and wonderful images as Ant McPartlin dressed as a cowboy, holding a bomb on the back of a bucking bronco, Edward VII showing off his new trainers and Moir himself with a bizarre, bright yellow wig setting off his grey beard.

Why? Who knows? The meaning is, thereis no meaning.

You might be inclined to say to the highly talented painter responsible for this work: “It’s art, Jim, but not as we know it.”

The comedian works in a garden studio at the house in Kent that he shares with his wife Nancy. He says he was immersed in art as a child growing up in Darlington.

“My mum used to paint and my dad did woodturning,” he says. “We would spend our weekends at craft fairs and art galleries. That was just what we did. We were steeped in that world,” he explains.

“All I ever did as a child was paint. I won two competitions back then. When I was 10, I won a competition that was on the back of a Corn Flakes packet for painting a picture of a combine harvester. I don’t know what I won – probably another packet of Corn Flakes!

At that time, my sister used to get Jackie magazine, and people would send drawings of their favourite pop stars into the magazine. So I sent in a drawing of Marc Bolan, which got published.” 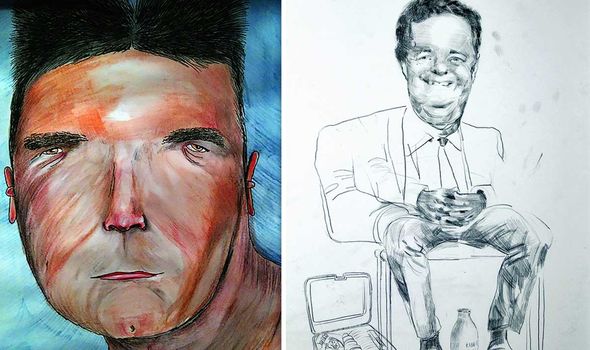 However, Moir admits: “I put my sister’s name on it because all I could think of was my friends mocking me, ‘Ooo, you read Jackie magazine!’

“I was over the moon when it was published, but I couldn’t blow my own trumpet because the ­picture didn’t have my name on it.” Now Moir is more than happy to have his name attached to his paintings. He has well and truly got the art bug. He says: “I like to produce something every day. The easiest way to get ideas out is to put them on paper. I like to sit back at the end of every day and think, ‘I created that today.’

“I’m in my studio at 6am every day because I work better in the morning. Then in the afternoon, I like to go for a walk. I enjoy going for a perambulation or a constitutional. It’s all very Victorian.”

An excellent draughtsman with a particular facility for painting animals, Moir has turned his art into an enormously successful business, with his works selling for hundreds, sometimes thousands, of pounds.

“My art has done very well financially,” he admits. “My paintings of birds sell the best. As soon as I do them, they fly out of the ­studio. People like them because they’ve always got room for something fairly innocuous and small that will go in a ­corner somewhere.” 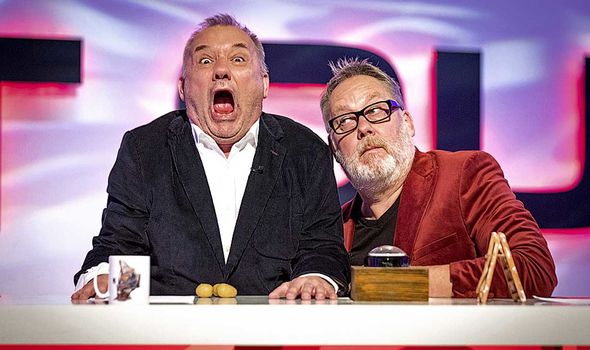 Moir’s work has also been recognised by a very august artistic institution.

“You know you can get those T-shirts with the sign of a huge tick on the front? I might go to the Royal Academy wearing that T-shirt.”

Moir, who studied art at Sir John Cass College in Whitechapel, east London, admits that last year he ­covertly broke gallery ­protocol. “I surreptitiously took a selfie in front of my painting at the Royal Academy, and then ran out very quickly so they couldn’t catch me,” he chuckles.

What is perhaps most impressive is that even now he is in his 60s, he is eager to keep learning.

Moir says he continues to be inspired by painters such as Pablo Picasso and Francis Bacon.

Touching on his current artistic ­influence, he reflects that at the moment, “I’m in a Rubens kind of mood. That sounds like an album by Richard Clayderman, doesn’t it?”

“I look at YouTube videos and think, ‘How would I do that?’ I like experimenting with things. For instance, drying paintings off too quickly in a microwave can look strangely beautiful.

“Pouring bleach on to paintings can also work. One day when Bob and I were writing, I found these old 1930s photos. I started dropping bleach on to them, and we immediately stopped writing and started doing that instead.

Moir sums up what he loves most about painting. “It gives me great ­satisfaction. When I’m painting, I haven’t got anyone looking over my shoulder. And if a painting goes wrong, it goes in the bin. No one is saying, ‘Do it again’.”

Vic Reeves Art Book contains four years’ worth of work, but the good news is that he is such a prolific painter, he feels he’s already got enough material for a second volume.

One type of celebrity that Moir paints especially well is rock stars – whether it’s Bono conducting a cookery club or Mick Jagger and Keith Richards doing battle with machine guns, while perched on top of ­elephant seals.

Another sequence of pictures features pop stars laughing because they have just won the lottery. And Sylvester Stallone, as Rocky, clutching a scratch card.

“I did those when I was filming an episode of [the drama] Shakespeare and Hathaway and had nothing else to do in the evening.

“I was thinking, ‘What would make pop stars laugh their heads off? Winning on the scratchcards, of course.’ They clearly buy scratch cards every week.”

Surreal to the last, Moir jokes: “In my local shop, there is always a line of pop stars waiting to buy scratchcards. Last week we had all of Foreigner, Weather Report and Deutsch Amerikanische Freundschaft queueing up for a scratch card!”