The Kardashians and Larsa Pippen were once inseparable. For over a decade, fans saw them attending each other’s parties, going on vacations together, and posting countless selfies together on Instagram. Kim Kardashian loved being around Pippen so much, she even called her "the most positive uplifting person" she knows. Meanwhile, Pippen gushed Kim was her "bestie her life." Unfortunately, things changed in the blink of an eye in 2020, and Pippen is singing a very different tune about the family these days. The timeline of the Kardashians and Larsa Pippen’s beef is a lot to take in, and shows how the greatest of friends can become like strangers again.

When celeb friends as close as the Kardashians and Pippen completely disappear from each other’s socials, fans are bound to suspect something is up. Even though Pippen initially denied rumors of a beef, before fans knew it, she was changing her story.

This drama has so many twists and turns, and you need to read about everything from beginning to end to believe it.

Before June 2020: A Friendly History

Here’s a brief history of the Kardashians’ friendships with Pippen. Kim first introduced Pippen to fans on Kourtney and Kim Take Miami around 2011. After the series ended in 2013, viewers continued getting to know Pippen on Keeping Up With the Kardashians. She was by the family’s side through many of their biggest moments on the show (both the good and the bad), like Kim’s wedding to Kris Humphries and Tristan Thompson and Jordyn Woods’ infamous cheating scandal.

The Kardashians and Pippen were also regular staples on each other’s Instagrams. In June 2019, Kim, Kourtney, and Khloé Kardashian, as well as Kendall and Kylie Jenner, all attended Pippen’s 45th birthday party. They made sure to document the night with a big group picture featuring their mutual friends, like Natalia Diaz, Michelle Pooch, and Nicole Williams.

Everything seemed perfectly fine in 2019, but that was just the calm before the storm.

The coronavirus pandemic forced so many people to stop seeing their loved ones, so when the Kardashians and Pippen suddenly stopped hanging out, fans thought it was because of the social distancing guidelines put in place to slow the spread of the virus. However, when Khloé invited her closest friends and family to her extravagant 36th birthday bash on June 26, fans were shocked Pippen was absent. Their suspicions about a fallout only grew when none of the Kardashians showed up to Pippen’s 46th birthday party on July 6, even though all her other friends went to celebrate.

The next month, one social media move had fans questioning everything: The Kardashians and Pippen unfollowed each other on Instagram. That was all fans needed to be convinced the sisters and Pippen actually had beef behind the scenes. Fans were so loud on social media that Pippen felt the need to address the rumors.

"I woke up this morning blessed and see that everybody is focused on who I am following and who I am not following on social media," Pippen wrote on her IG Story on July 23. "I am focused on my children, my new fitness brand Larsapippenfitness, and my relationships in real life. Praying that everybody finds peace in their own lives and focus on what brings THEM happiness."

Pippen didn’t exactly deny anything, so fans took it as a sign something major happened between her and the Kardashians, and she just didn’t want to talk about it.

During a Nov. 9 interview with The Hollywood Raw, Pippen finally confirmed she and the Kardashians grew apart and blamed Kanye West for their fallout. "I love you [Kim], you and I are best friends, we’ve been through everything together, I would never do anything to jeopardize our relationship, we’re like sisters, we’re family, but if you have to unfollow me to make your home a better place, do it," Pippen said. "He talks so much about me being this and that and this and that. I just feel like Kanye was in a place where he really didn’t trust anyone with Kim."

Pippen even went so far as to say West turned all the Kardashians against her. "[West] has literally brainwashed the whole family into thinking I don’t even know what," she said.

Pippen even accused Travis Scott of coming between her and Kylie Jenner. "I ran into Travis Scott one night at a club and Travis called Kylie and said that I was hitting on him. That never happened," Larsa explained. "I know he raps about being the highest in the f*cking room. So clearly, maybe he was the highest in the f*cking room. He imagined all this sh*t because it never happened."

She thought the incident could have added to the family’s distrust of her. To add some more fuel to the fire, Pippen dropped a huge bombshell, claiming she dated Tristan Thompson before Khloé. "Before Khloé or any of them knew [Thompson] existed. I was seeing him … I brought him to a party Kim had. I introduced him to all of them. Then a week later, or 10 days later, he started seeing Khloé, which is fine. I don’t even care. It’s whatever," Pippen said.

The day after Pippen’s bombshell interview, reports claimed the Kardashians did, in fact, not trust Pippen, but it wasn’t for the reasons she believed. Instead, an insider claimed the sisters caught her "talking behind their backs" once. Another source said the family thought Pippen was a "toxic energy," and that’s why they distanced themselves from her. (The Kardashians didn’t respond to Elite Daily’s previous request for comment on the report.)

As for what the Kardashians actually feel about Pippen’s claims, apparently they’re not letting it get to them. "The family thinks Larsa spoke out about this now because she is craving attention," a source told Us Weekly on Nov. 12. "And the only attention she got as of late was from being Kim’s best friend and from being on the show."

The same day, Pippen posted a cryptic IG Story that seemed to be directed at the famous sisters. "Telling the truth isn’t a crime," the post read. 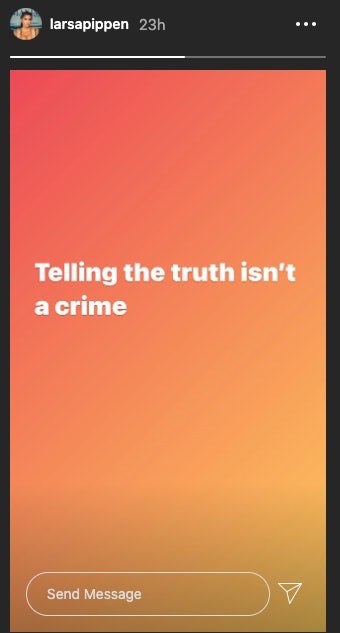 In the end, however, Pippen seemed to move on from the drama as well because she shared this quote on her main profile: "Pray, and then let it go. Don’t try and manipulate or force the outcome. Just trust God to open the right doors at the right time. Amen."

The Kardashians seemed to put the incident in the past as well. For one, reports from the family stopped coming, and they have yet to address the situation directly, either.

It’s sad to see the Kardashians and Pippen go their separate ways, but at least their drama seems to be over for now.

In Elite Daily’s It’s Complicated series, we dissect the biggest celebrity drama to find out what happened in front of the camera, behind the scenes, and everywhere in between. Read more here.