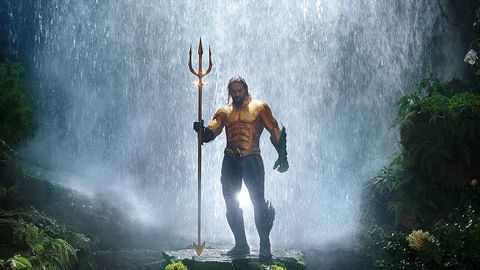 In case you’ve been living under a rock, the sea, etc., you’ve seen promo images of an extremely ripped Jason Momoa as Aquaman somewhere. Becoming extremely ripped was not an easy feat for the 6-foot-4 actor, who just told E! that since the film wrapped, he’s made no attempt to keep himself in that kind of shape.

“I had to not really eat as much to stay lean. I’m Hawaiian—if we eat, we just get big. So, genetically, it’s hard for me to get trim,” he told E! of getting into Aquaman-level shape. “You deplete yourself of carbs, so I had a harder time getting lean. I’d rather just get big.”

So “get big” he is: “I haven’t touched a weight in nine months. I’m just eating bread and butter! Every day is a cheat day!”

Lest you worry he’s neglected blowing off ab workouts too, don’t: He’s always hated doing abs, he said, because he can’t drink beer. And he wants to drink beer! So now he’s drinking beer.

That said, he’s committed to a few more of these movies, so he knows he’ll have to go back to the sad, carb-less life eventually. But for now, cheat day everyday.