Rihanna’s Savage x Fenty 2020 lingerie fashion show took place on Friday, Oct. 2, with some changes due to the coronavirus pandemic, but the event didn’t go off without a hitch. The show, which streamed live on Amazon Prime Video, might have been visually perfect to viewers, but there was one major moment that caused a lot of backlash. During the fashion show, models danced to London-based producer Coucou Chloe’s song “Doom" which includes a reading of a Islamic Hadith verse, and fans were not pleased. Rihanna’s apology for using Islamic verses in her fashion show was heartfelt and very much needed.

Following the show, social media users slammed Rihanna for using the song (which was criticized for incorporating verses from Hadith when it was first released in 2017) for entertainment, calling her out for alleged religious appropriation. For background, the Hadith is a collection of traditions and sayings of the prophet Muhammad which, apart from the Koran, is the major source of guidance for Muslims apart from the Koran.

Rihanna issued an apology on Monday, Oct. 5, where she not only expressed how sorry she was for her mistake, but also admitted to not being educated on the significance of the verses contained in the song, thanking the Muslim community for educating her.

“I would like to thank the Muslim community for pointing out a huge oversight that was unintentionally offensive in our Savage x Fenty show,” Rihana wrote. “I would more importantly like to apologize to you for this honest, yet careless mistake.” 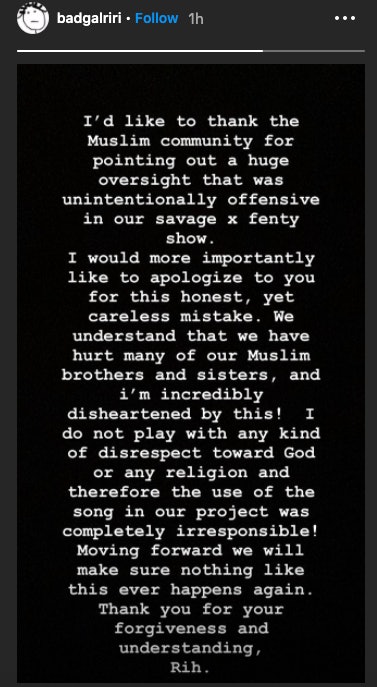 Rihanna concluded her post by thanking her followers for their "forgiveness and understanding."

Coucou Chloe also issued an apology regarding the song, tweeting: “I want to deeply apologize for the [offense] caused by the vocal samples used in my song ‘DOOM.’ The song was created using samples from Baile Funk tracks I found online. At the time, I was not aware that these samples used text from an Islamic Hadith.”

Chloe added that she’s "in the process of having the song urgently removed from all streaming platforms."