AceShowbiz -Fans of late rapper Nipsey Hussle have been trying to mortalize his legacy why doing murals all across the country. However, one teenager girl had the audicity to deface one of the rapper’s murals for an unknown reason, much to everyone’s rage.

In a video that hit the interneton Saturday, April 27, a woman, who was later identified as Kaitlyn Renee or “Kay Kay”, sprayed a can of black spray paint on the mural in Hartford, Connecticut. She drew a green image of a penis in addition to the letters SK.

As if vandalizing the mural was not enough, Kay Kay was seen laughing and even taking a selfie with the damaged wall. A woman could be heard telling Renee off, saying, “Not his face! Just don’t do his face!”

“She hella disrespected #NipseyHussle mural by spray painting over it and then took a selfie…Baby girl had action at knocking her out didn’t do anything! When are we going to realize that they aren’t our allies or associates? #PayAttention,” one Twitter user wrote.

“Smh people have no respect. Disrespected Nipsey Hussle’s memorial in Hartford, CT just for social media,” another fan ranted. “The young broad that spray painted on a #NipseyHussle mural in Hartford Connecticut. Smh negativity is what they’re about and fame is what they want. Here you go,” one other wrote alongside a screencap of Kay Kay’s Instagram update in front of the vandalized wall. 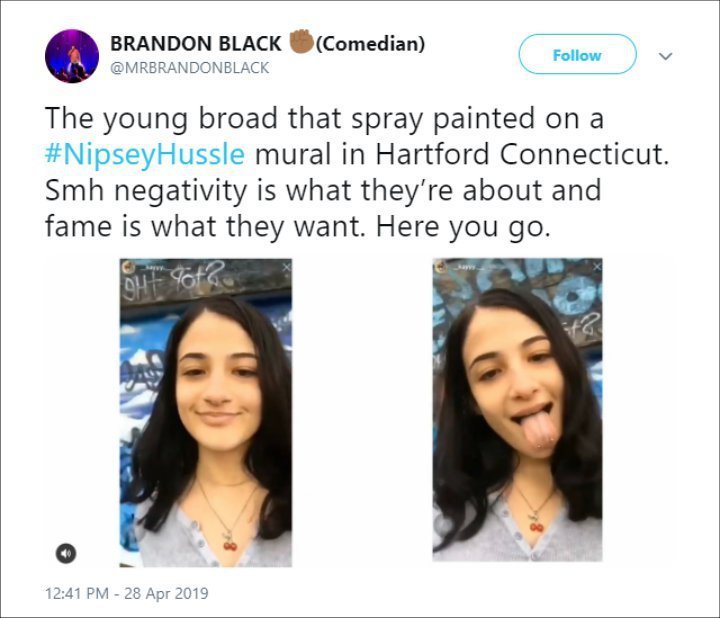 Kay Kay later took to Facebook, explaining why she did her crazy stunt. “Y’all really mad,” she wrote. “I ain’t boutta argue with none of y’all over some PAINTING. you know how much dope s**t in heaven park gets painted over? Oh alright then hop off. Yah Boutta ‘kill’ me over a painting. That s**t is hilarious.” 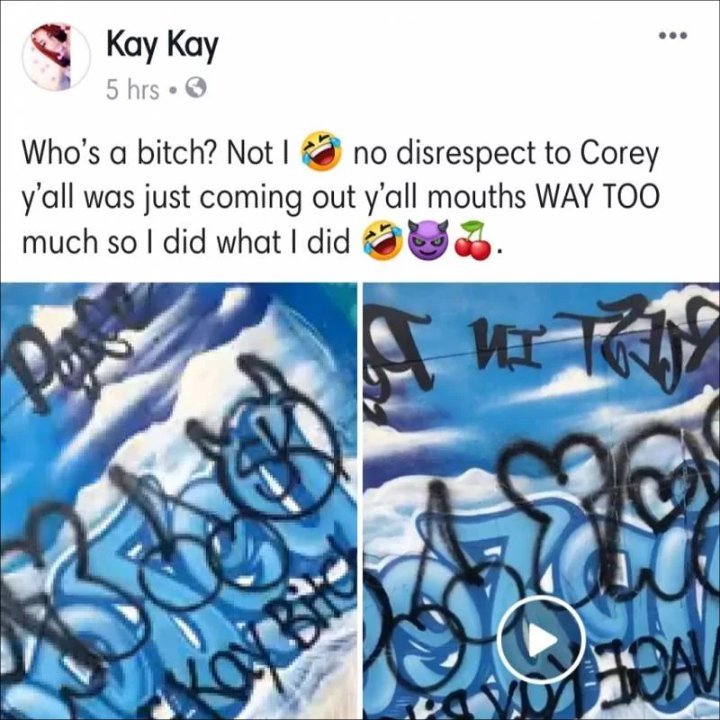 She continued writing, “Who’s a b***h? Not I. no disrespect to Corey [artist] y’all was just coming out y’all mouths WAY TOO much so I did what I did.”

Nipsey was murdered on March 31 after being gunned down outside of his Marathon Clothing store in South Los Angeles. To pay tribute to the rapper, on April 12, the Los Angeles intersection of Crenshaw Boulevard and West Slauson Avenue was officially re-named to Nipsey Hussle Square.