Mama June revealed a brand new look after she had more than a pound of fat removed while undergoing neck liposuction and major dental work done, which all cost an estimated $55,000.

Mama June, 41, is proudly showing off a new look and she’s thrilled about it! The From Not to Hot star recently underwent plastic surgery, which included neck liposuction and dental work that cost an estimated total of $55,000, and is showing off her amazing transformation in new photos that can be seen HERE! In the neck liposuction, June had more than a pound of fat removed from her neck, getting rid of her “triple chin”, and in her dental work, she had veneers fitted to her teeth, which were damaged by her crack addiction.

“It feels good to get rid of my triple chin and to have my teeth fixed and looking beautimmous,” she told The Sun about her makeover. “I feel like a new woman.” 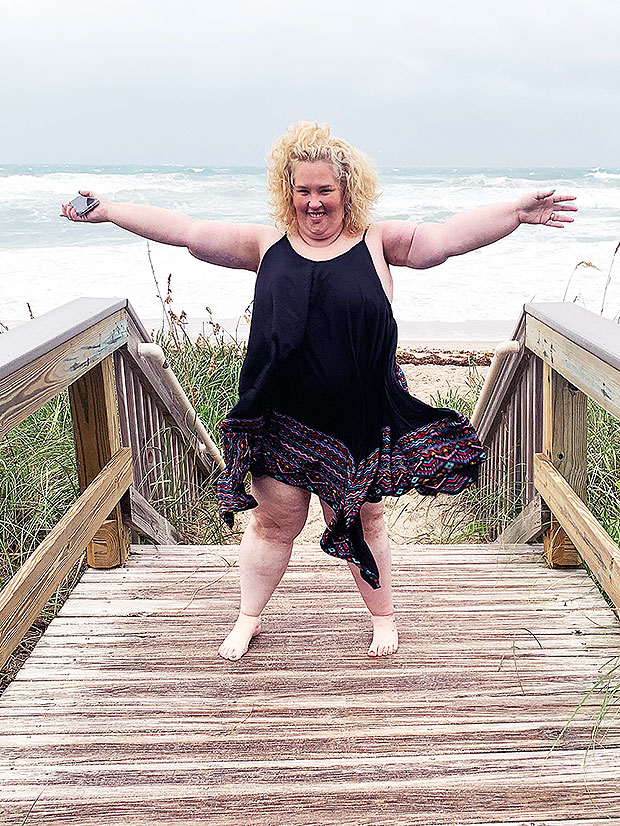 June’s neck liposuction lasted an hour and a half and cost $15,000. She had it done by Dr. Michael K Obeng in Beverly Hills, according to The Sun. Her veneers cost $44,000 and were fitted for both her upper and bottom teeth. They were done by Dr. Rashad Riman and Dr. Leedia Riman at Beverly Hills Dental Lab, the outlet further reported.

Before her cosmetic surgery took place, June originally intended on having liposuction and a tummy tuck to celebrate being sober for seven months after admittedly struggling with a $4,000 a day crack habit. She couldn’t go through with the procedure, however, because pre-op consultations showed that the fat on her stomach was “solid and deeper than expected.”

Oh k I’ve been waiting for a minute to share with y’all my new smile that @doakgeno and I got from @drleedia @beverlyhillsdentallab @sam_alawie @rdentalgroup @dr.rashadrima theey were all awesome Also @drmichaelkobeng did lipo on my chin and neck. @drsamkashani did the gastric balloon on @doakgeno and @drmichaelkobeng removed the lump on his neck and head. Big thank you to all of them!! 🙌🏼 and a big thank you to my favorite LA camera guy @starbuck67

Like June, her boyfriend Geno Doak, also underwent cosmetic procedures, including a $31,000 gastric sleeve surgery with Dr. Samuel Kashani and a $20,000 lipoma removal on his neck and head with Dr. Obeng. He also had $40,000 veneers placed on his upper and bottom teeth with the same dentists that June used.

He expressed his satisfaction for his own transformation to The Sun. “I was tipping the scales at over 300lbs and the lumps I had on my neck and head for years,” he said. “Having those removed, the gastric sleeve done and my new teeth feels great. I’ve already lost 23 lbs.”

Although it took a while to get on track, June revealed that she’s happy with the changes and feels like it is “the start of something new.”

“This past year has been a real struggle for Geno and I. We’ve had so many ups and downs with our troubles and then COVID-19,” she explained.“ After having all my procedures done and my hair and clothes styled I feel brand new. I’ve lost 11 pounds in the past couple weeks since I’ve been watching what I eat.”

“We just celebrated seven months clean so having this mini makeover felt like a reward,” she added. “We hope this is the start of something new and exciting in our lives.”