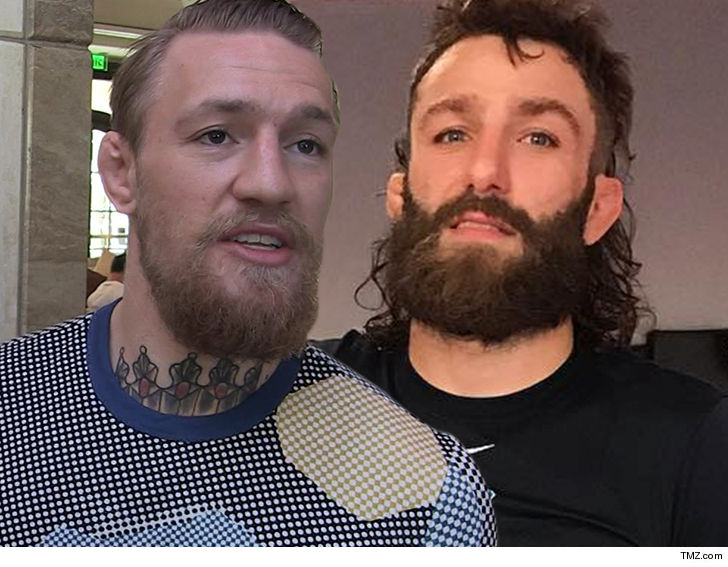 UFC fighter Michael Chiesa claims Conor McGregor‘s steel dolly attack was a publicity stunt intended to hype his fight with Khabib … and now he wants ALL of Conor’s UFC 229 profits.

Long story short … Chiesa (who was injured in the bus attack) claims NY law bars people from profiting from criminal activity and requires them to turn over ill-gotten gains to their victims. It’s called the Son of Sam law.

In new court docs filed by Chiesa, the UFC fighter argues the April 5 dolly incident drove up interest in UFC 229 and boosted sales of Conor’s Proper 12 whiskey brand, so all profits should be handed over.

It’s not a small number — Conor publicly stated he expected to make $50 MILLION for the Oct. 6 fight against Khabib … plus MILLIONS more from the sales of Proper 12.

Here’s how Chiesa spells it out in his lawsuit …

“By his own admission, [McGregor] engaged in the aforementioned conduct and acts with the premeditated intent and purpose of inflicting severe personal injuries and/or murdering Nurmagomedov, and sought to promote his brand and profit from his criminal activity.”

He also cited Conor’s UFC 229 press conference … when McGregor reflected on the bus incident and said Khabib would be “dead” if he had stepped off that bus that day.

Chiesa was a passenger on the bus and suffered cuts to his face when he was stuck by shattered glass.

Chiesa claims he was unable to compete in his scheduled fight against Anthony Pettis at UFC 223 that weekend — and lost an even BIGGER opportunity to fight Khabib when Max Holloway pulled out of the main event.

In his docs, Chiesa claims the UFC had reached out to him about filling in for Holloway in the title match at UFC 223, but Chiesa says his injuries prevented him from taking the fight.

Chiesa says he suffered from depression following the ordeal — and claims his inability to fight at UFC 223 hurt his overall standing in the UFC.

For his part, Conor has previously said Chiesa should NOT be able to sue for intentional infliction of emotional distress because he wasn’t the intended target.