Forget Tiffany’s – how about Breakfast In Bed? Oozing with sophistication, it’s one of the most iconic romantic comedies in film history. But as its final manuscript is sold, MARK EDMONDS tells how Breakfast At Tiffany’s was nearly a much racier affair 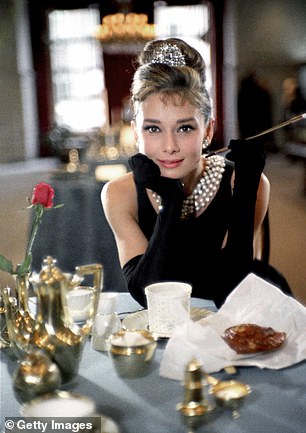 The character Holly Golightly seemed tailor-made for Audrey Hepburn (pictured), who played the kooky and complex New York girl-about-town in the Oscar-winning film Breakfast At Tiffany’s

The character Holly Golightly seemed tailor-made for Audrey Hepburn, who played the kooky and complex New York girl-about-town in the Oscar-winning film Breakfast At Tiffany’s.

The name itself was a perfect fit; just as snug, sophisticated and feminine as the Little Black Dress Hepburn wore in the film, released in 1961, as she skips flightily along Fifth Avenue, making a beeline for upmarket restaurants and society parties.

But if Truman Capote, the American author of the novella upon which the film was based, had had his way, Holly Golightly would have never existed.

For it was revealed last week that in his original story — the final manuscript of which has just sold at Sotheby’s for £377,000 — his heroine was called Connie Gustafson.

Yet the name sounded dull, stodgy, as though it might belong to a dowdy middle-aged housewife from the American Midwest — and it was a world away from the mid-century glamour of a film that would become one of the most successful romantic comedies of all time.

Oozing with sophistication and understated sex, Capote’s story follows the tale of a high-class escort’s dogged search for a rich husband and her eventual infatuation with a charming new neighbour, Paul Varjak — a struggling young writer.

Capote had based his protagonist on some of the aristocratic women in his New York circle, among them Gloria Vanderbilt. Neither they nor Hepburn, a poised ingénue from a well-bred Belgian family, would have been seen dead with a name like Connie.

So Capote decided to change it — just one of a large number of painstaking revisions and amendments that appear in his final draft, which was formerly owned by a Russian billionaire. 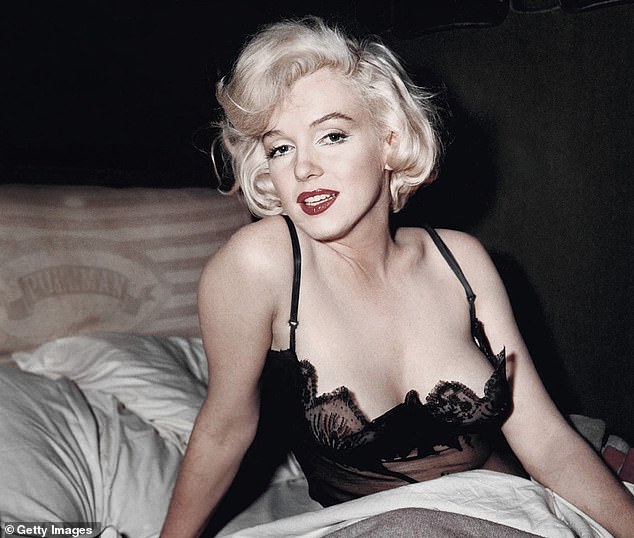 Truman Capote, the American author of the novella upon which the film was based, lobbied hard for Marilyn Monroe (pictured in a publicity still for the 1958 film Some Like It Hot) to be given the role. In fact, he’d had her in mind as his heroine when he wrote the novella

But while Capote decided to inject a sense of scandal into his protagonist’s name, many of his changes were part of a concerted effort to tone down the original version’s explicit scenes — principally in an attempt to appease squeamish editors at Harper’s Bazaar, where he intended to publish the story.

In one deleted section, referring to past sexual encounters, Holly says: ‘Boy, I have hit the hay with some real ghastlies just because I couldn’t stand it any longer. I had to have somebody hold me.’

During another expunged conversation between Holly and her flatmate, Mag Wildwood, Mag reveals that while having sex, she fantasises about a statue of her forefather ‘Papadaddy Wildwood’, dressed in his military uniform.

Yet Capote’s original manuscript — fascinating historical document it may be — tells only part of the story behind the resulting film. 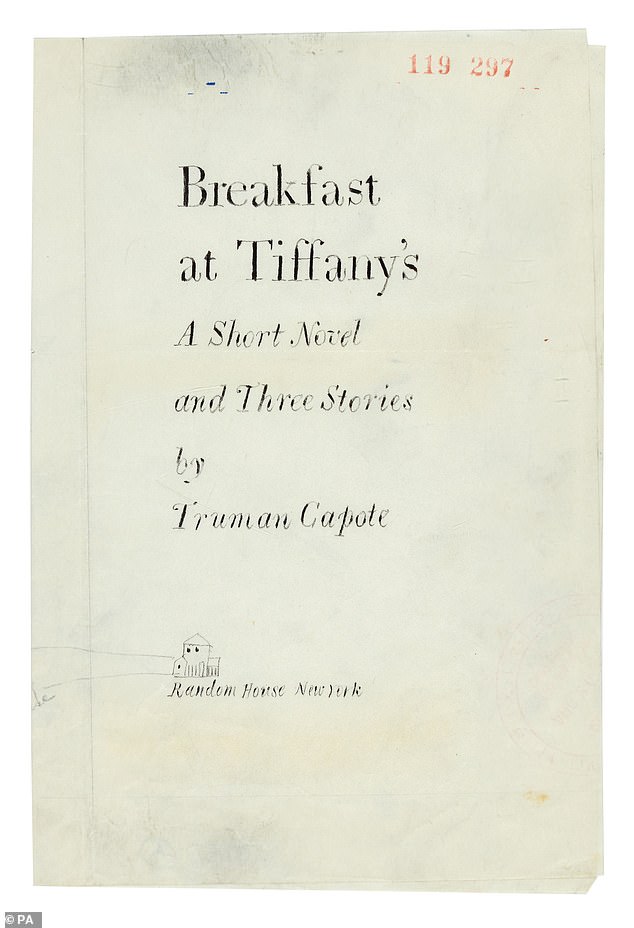 It was revealed last week that in Capote’s original story — the final manuscript (pictured) of which has just sold at Sotheby’s for £377,000 — his heroine was called Connie Gustafson

For the version of Breakfast At Tiffany’s that finally made it to the silver screen — and turned Audrey Hepburn into an international superstar, earning her an Oscar nomination — was very different from the film that Capote, himself a highly controversial and tortured personality, had envisaged.

The Breakfast At Tiffany’s he’d had in mind was a much darker affair, more sexually charged and direct, but it was deemed far too hot for Hollywood to handle.

The prevailing Motion Picture Production code made it very difficult for mainstream films to include sex scenes, and even in the early Sixties, sex could be only alluded to. And so director Blake Edwards had to be very careful.

In the film, Holly is an eccentric society girl, much in demand with various suitors — yet her precise employment status is made deliberately ambiguous.

She is never confirmed as a call girl, but she has no compunction in taking $50 from a succession of men ‘for the powder room’. 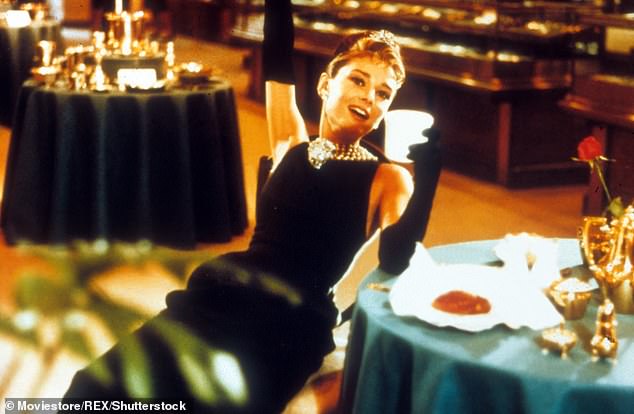 The version of Breakfast At Tiffany’s that finally made it to the silver screen — and turned Audrey Hepburn into an international superstar, earning her an Oscar nomination — was very different from the film that Capote

At the time, even in the early Sixties, Hollywood directors were very anxious about the blatant depiction of sex, let alone paid-for sex.

In the novella, however, there is no question that Holly is a prostitute, albeit an upmarket one, servicing clients in an opaque way, somehow managing to blur the line between companionship and financial transaction.

In a 1968 interview, Capote said: ‘Holly Golightly was not precisely a call girl. She had no job but accompanied expense-account men to the best restaurants and nightclubs, with the understanding that her escort was obligated to give her some sort of gift, perhaps jewellery or a cheque . . . if she felt like it, she might take her escort home for the night.’

That’s partly why Capote lobbied hard for Marilyn Monroe to be given the role. In fact, he’d had her in mind as his heroine when he wrote the novella.

Monroe, of course, was by then a brassy Hollywood siren. She exuded sex from every pore, but beneath her overt promiscuity Capote felt there was also a simplicity that would imbue Holly Golightly with vulnerability. 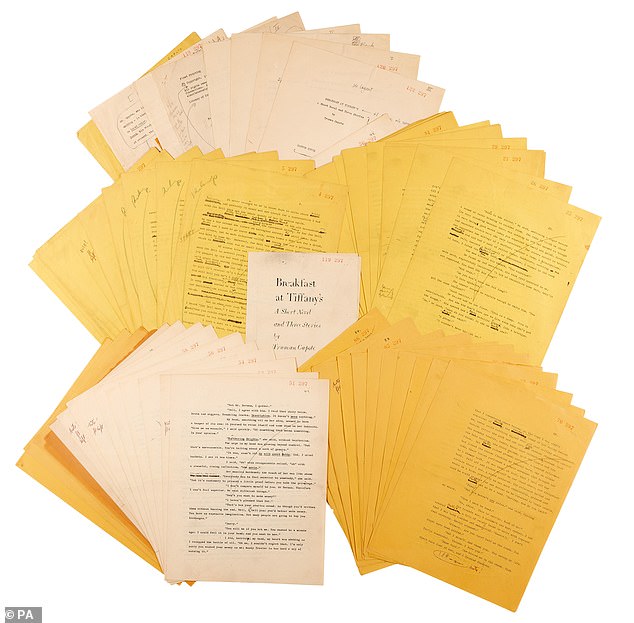 The typescript, covered in hundreds of Capote’s handwritten edits, sold to an anonymous buyer at Sotheby’s London for more more than double the pre-sale estimate of £120,000-180,000

For Monroe, at heart, was a little-girl-lost. She once confided to Capote: ‘I’ve never had a home. Not a real one with all my own furniture.’

Capote and Monroe had long been friends, and he was well aware of her vulnerabilities — they would often go out to dinner, sitting conspiratorially in the dark corners of smart Manhattan restaurants. They would even dance together, Monroe in bare feet, kicking off her shoes so that she would not tower over the 5ft 3in author.

But there was never anything sexual in their relationship; Capote was famously homosexual, and was valued by Monroe only as a confidant, companion and walker.

As for playing Holly Golightly, Monroe had told Capote that she was very keen on the part. But the producers were not having it.

The character — a woman living on her own and on her wits in the centre of New York City — would have to be tough and strong. Monroe was simply not that person. 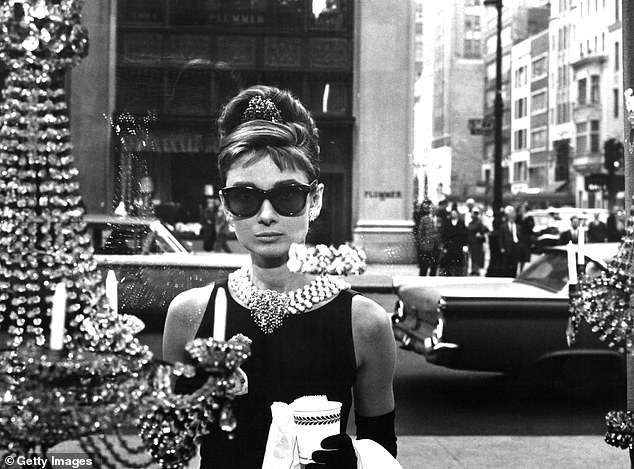 The Breakfast At Tiffany’s Capote had in mind was a much darker affair, more sexually charged and direct, but it was deemed far too hot for Hollywood to handle

Of course, there were other, more practical considerations. In any film, Monroe was almost impossible to manage. Arriving on set, she was always chronically late, and when she did make it into work, she had a pathological inability to remember any dialogue.

Even the most straightforward of lines would be a challenge for Monroe and often required around 40 or 50 takes.

In the end, it was Monroe’s agent who had the final word. ‘Marilyn will not play a lady of the evening,’ she pronounced.

Perhaps she was concerned by the book’s further nods to sexual intrigue, although they’re barely hinted at by the film, which ends with Holly and writer Paul, played by George Peppard, embracing.

In the book, however, Capote makes a strong case that Holly is a lesbian — and that her love interest, Paul, is secretly gay. 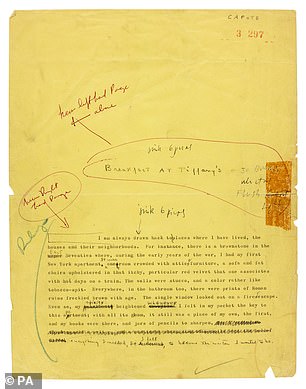 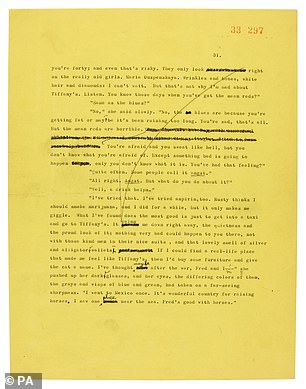 In one deleted section, referring to past sexual encounters, Holly says: ‘Boy, I have hit the hay with some real ghastlies just because I couldn’t stand it any longer. I had to have somebody hold me.’

Of course, the premise of this would have been unthinkable to a Hollywood director at the time — and might even have precluded the film from release.

Capote would later say: ‘It’s a well-known fact most prostitutes are lesbians — at least 80 per cent of them, in any case. So are a great many of the models and showgirls in New York . . . there’s a lesbian component in every woman.’

In the novella, Holly tells a former flatmate, with whom she shared a home in California: ‘Of course, people couldn’t help but think I must be a bit of a dyke myself. And, of course, I am. Everyone is a bit. So what? That never discouraged a man yet — it seemed to goad them on.’

Of course, Audrey Hepburn never said such a thing in the film.

Even so, between Hepburn and Capote, they created an intriguing legacy: a blockbuster of a film that is much loved, with a story behind it that is even more gripping than the one that appears on screen.