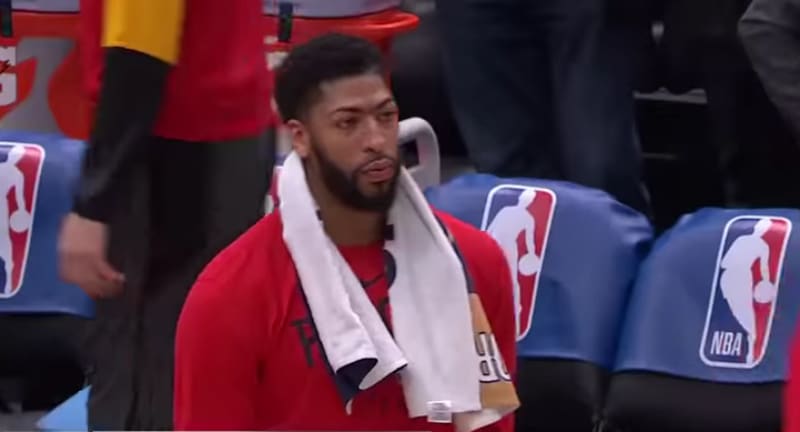 Anthony Davis is done in New Orleans and now, it looks like the Pelicans may be looking to preserve him in preparation for a summer trade.

After reported threats of a fine for sitting their All-Star center, an Anthony Davis shoulder injury on Thursday night has skeptics wondering if this is just the team’s way of benching Davis and avoiding the hefty fines.

Even CBS Sports questioned the severity of Anthony Davis’ shoulder injury after he was removed from the game against the Oklahoma City Thunder. Davis played through half time but was ruled out soon thereafter because of the injury.

It’s no secret that Anthony Davis wants out of New Orleans as he requested a trade with plenty of time to spare before the February 7 NBA trade deadline but the Pelicans did not oblige. Current NBA trade rumors suggest that Davis will be traded over the summer following the NBA Draft.

When news of his trade request became public, New Orleans fans got upset with their superstar, even booing him during games. At this point, it’s probably better for the Pelicans to sit their star and keep him healthy in order to keep his trade value high.

With many questioning just how serious Anthony Davis’ shoulder injury really is, we may get to see the truth in the next few days. With the 2019 NBA All-Star Weekend coming up, his status in the All-Star game will be a good indicator of whether he is really injured or if the Pelicans are trying to protect their biggest asset.

Davis is playing on Team LeBron and prior to his injury, there were rumors that the Los Angeles Lakers star picked him specifically because he wants to recruit Anthony Davis to join the team.

All eyes will be on Anthony Davis this weekend to see if he plays or sits and whether the Pelicans should be looking at a fine for benching him.

With his time running out in New Orleans, Davis already has an arrangement with the team to play every other game and to have his minutes limited.

With the threat of a $100,000 fine for each game where Davis doesn’t play, a sudden shoulder injury would exempt them from the fine.

It’s hard not to ask if Anthony Davis’ shoulder injury isn’t just a money-saving move made by the team.