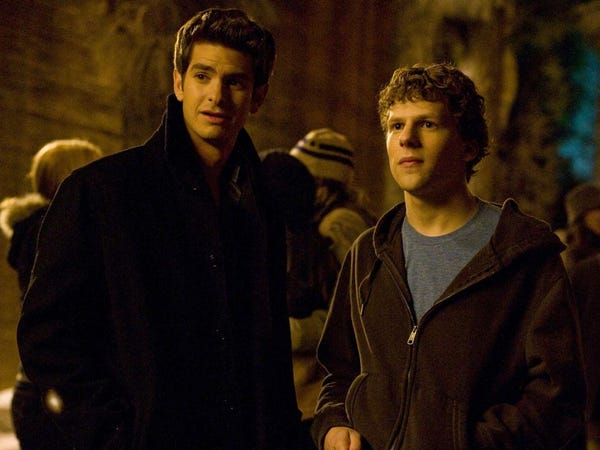 "The Social Network," David Fincher's beloved drama about the birth of Facebook, is celebrating it's 10th anniversary this month. And because of the milestone, there's tons of tidbits resurfacing from the movie set.

One in particular that seems on brand with the vibe of a Fincher movie set is what he ordered Andrew Garfield to do between shots.

Garfield, who plays Zuckerberg's friend Eduardo Saverin, had to lay insults into his costar Jesse Eisenberg, who plays Facebook founder Mark Zuckerberg, before shooting scenes, according to a 2010 feature by Empire that the magazine recently put online to celebrate the film's anniversary.

"[Garfield] leaves to change into his own, casual clothes, before returning to crouch behind the camera as it hovers close to Eisenberg. Just before the camera rolls, he leans toward the 'Zombieland' star and hisses, 'You're a f—ing d–k and you betrayed your best f—ing friend. Live with that.' It's shocking to hear. It certainly helps with the take. And it is evidence both of Garfield's professional generosity and Fincher's nous – for the abuse was at the director's instruction, to help Eisenberg get in the right headspace for the scene."

This is just another example of the unique energy Fincher brings to the making of his movies. For years we've heard about how the director behind "Fight Club" and "Zodiac" likes to operate on set.

The biggest being his love for doing multiple takes on the most simplest of shots. Most recently, Amanda Seyfried revealed that Fincher had her and other cast members do 200 takes for one scene in his upcoming Netflix movie, "Mank," a biopic about "Citizen Kane" screenwriter Herman J. Mankiewicz, out this fall.

Fincher told Empire back in 2010 on the set of "The Social Network" why he prefers doing so many takes of scenes — it's because he's "collecting behavior" so he has many options to work with while editing.

You can now add actors playfully insulting other actors as another element in the David Fincher toolbox.