You’re following the rules of the road, staying aware, and crossing with the lights. So why do some drivers act like you’re a cockroach on wheels?

The answer, as one new study suggests, is because they may actually perceive you that way for real.

Researchers from Monash University and University of Melbourne surveyed hundreds of drivers in Australia for their views on cyclists, and to determine if there was any dehumanization going on with how they perceived them.

Participants were shown either the famous “March of Progress” chart—depicting evolution from primate to human—or a modified version of the chart that used a cockroach rather than an ape.

They were also asked to rate responses to statements that compared cyclists to robots, machines, or inanimate objects, as well as identified certain emotional traits related to humans.

To test the results of a dehumanization perspective, researchers asked respondents whether they’d shown any aggressive behavior toward cyclists, from shouting and rude gestures to deliberately blocking their way with a car, driving close to them, cutting them off, or throwing objects at them.

About 31 percent of respondents rated cyclists as “less than human” on the trait scale, but the number what even higher when looking at the picture scale: When asked to answer how “evolved” they believed cyclists to be when looking at either the ape-person or cockroach-person evolution, 41 percent rated them as “less than human.” Both of these measures were linked to the aggressive behaviors, too.

Not surprisingly, those who were cyclists as well as drivers had the lowest rate of dehumanizing attitudes. 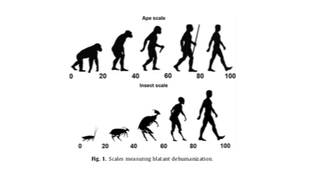 As for why cockroaches were chosen? The researchers found that online slurs against cyclists used that insect reference the most often, as a way to express disgust or aggression toward cyclists in the same way that people have those feelings toward the bug, explained lead author Alexa Delbosc, Ph.D., of Monash University.

Delbosc was inspired to do the study by the number of abusive and violent responses toward cyclists online, from newspaper comment sections to Facebook and Twitter.

“Why is it okay to ‘joke’ about hurting cyclists when we wouldn’t tolerate those comments if they were about other groups?” she said.

The strong connection between dehumanization and aggression is well established, she added. The driver-cyclist clash might be smaller in scale compared to other examples, but it still poses a significant threat to cyclist safety.

“When you see someone as less than human, it’s psychologically easier to justify aggression and anger toward them,” said Delbosc. “This plays out much more horrifically between ethnic, religious, and racial groups, but it seems there’s a small element of it going on between motorists and cyclists.”

The next step, she added, is to test interventions that reduce dehumanization. In particular, there may be creative ways to show cyclist faces to drivers so they’re seen as people, not “darting mechanical obstacles,” Delbosc said, or even worse—creepy bug creatures in Lycra.