When Ariana Grande wore her hair out on the cover of British Vogue earlier this year, she was unrecognisable; such is the power of the singer's huge and high ponytail.

Although Grande has previously explained why she dons the updo (it is the easiest way to style the extensions she wears due to her hair being ruined by repeated dyeing for her role on Nickelodeon show, Victorious, as a teenager), it was only earlier this week that the 25-year-old admitted her noggin fountain is not the most comfortable of styles. 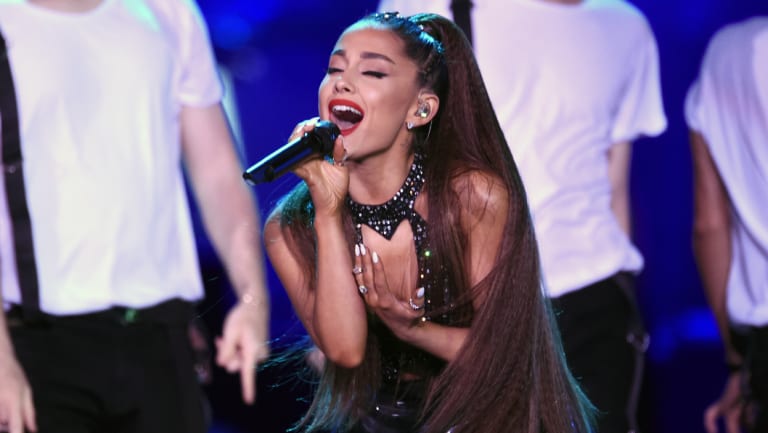 Ariana Grande has said her ponytail leaves her in “constant pain”.Credit:Invision

"I'm in constant pain always," she told Havana singer Camila Cabello, after Cabello tweeted her own attempt at the style had left her feeling like her ponytail was "literally pulling on [her] brain".

Melbourne dermatologist Rodney Sinclair says the described pain is caused by pulling on the hair follicles (not the brain; that's a bit of a misdiagnosis by Dr Cabello).

While most people with longer hair know the dull ache (or localised, sharp pain) that can come with keeping a ponytail in for too long, fewer know this can come with long-term effects.

Traction alopecia is a form of hair loss caused by pulling on the hair.

"You gradually release the hair from the follicle, and it hurts." Sinclair says.

The most force is applied to the load-bearing hair, furthest away from the ponytail. For a style like Grande's, that means hair loss can occur along the hairline above the forehead. However, if someone regularly wears their hair on the side – like, for example, child YouTube star Jojo Siwa – effects might be seen on side of the head, above the ear.

According to Sinclair, the most common place for traction alopecia to occur is actually behind a person's fringe, creating a widening bald line down the middle of their scalp.

"It depends on how you tie your hair."

So, should fans of the high pony be giving their hair a break? Sinclair says it (literally) doesn't hurt.

"There's two components to [traction alopecia treatment]," he says. "The first is that you've got to change your hair style; you've just got to part it in a different way, there's no real way around that. And the second is you've got to see if there is something else contributing to the hair loss; very often people who have traction alopecia also have age-related hair loss."

However, Sinclair acknowledges there can be emotional hurdles to changing your hair.

"People who've had the same hairstyle their whole life are really nervous about changing it," he says, noting that people often visit a dermatologist because they "want to keep" it.

But, changing your hairstyle need not be an ordeal. See Grande, who has – after her shock Vogue cover in July – recently developed a catalogue of 'dos ranging from side-parted ponies to the occasional low bun.

If your hairstyle is giving you a headache, it's time to say: Thank U, Next.